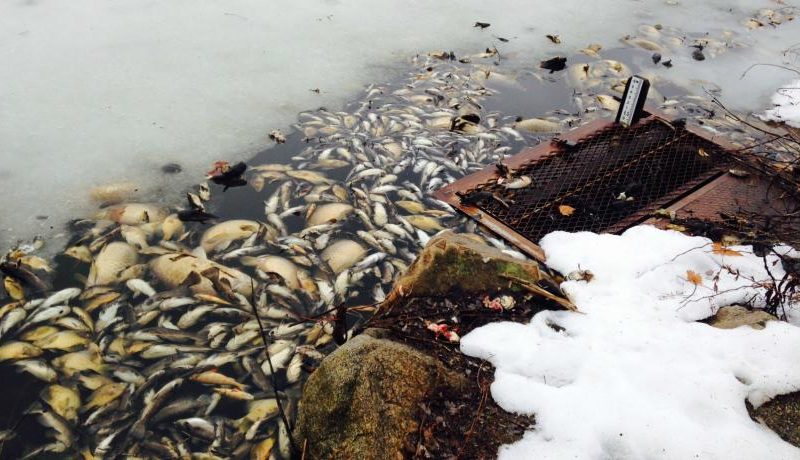 During winter, thick ice and heavy snow cover can result in low dissolved oxygen levels in ponds. With increasing ice and snow packs, there is less light penetration through the water column. This alters chemical and biological processes, often resulting in a winter fish kill.

The vast majority of fish kills turn out to be caused by a natural event. However, it’s important for biologists to rule out other causes including pollution. Natural fish kills are generally the result of low dissolved oxygen levels (anoxia), spawning stress or fish diseases. Dissolved oxygen depletion is one of the most common causes of natural fish kills. Weedy ponds that are less than 15 feet deep are particularly vulnerable. This can be the case at any time of the year but generally occurs during severe winters or late spring/early summer.

Ice anglers may encounter signs of a low oxygen environment when they drill through the ice and notice the smell of rotten egg or observe sluggish or dying shiners. The odor is hydrogen sulfide gas which is a natural byproduct of low dissolved oxygen environments, and is not likely the result of pollution. Oxygen levels will be return to normal shortly after the ice melts in the spring.

If you observe dead fish, contact the Environmental Police’s 24-hour radio room at 1 (800) 632-8075. A MassWildlife biologist will review each situation to determine whether the kill is natural or requires a site investigation.