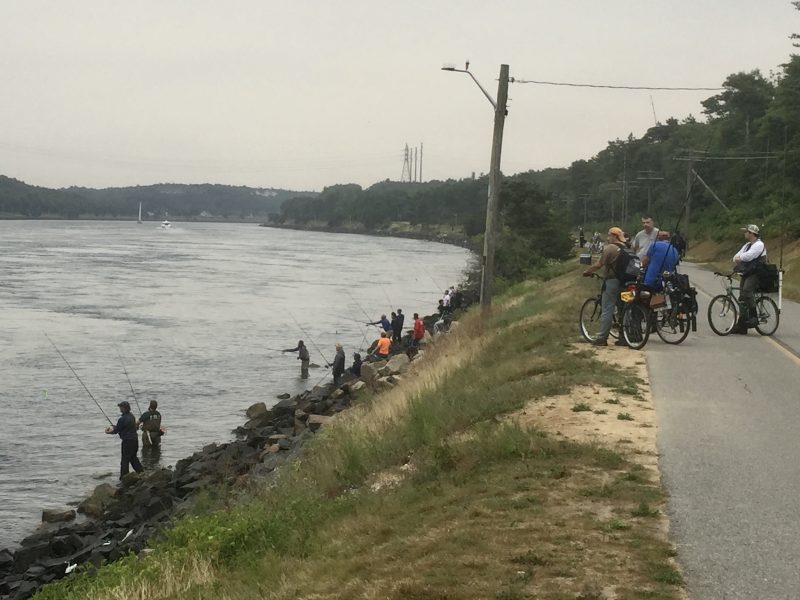 In response to growing complaints in recent years about violations of striped bass regulations, overcrowding, user conflicts, and littering on the Cape Cod Canal, the Massachusetts Division of Marine Fisheries (DMF) is considering making the Cape Cod Canal a recreational-only fishing area.

According to a representative from DMF, no formal decisions have been made on the subject. However, DMF has held discussions with the Army Corps of Engineers, (ACOE), the Massachusetts Environmental Police (MEP), and Bourne Police to determine the best ways to address poaching, trespassing, and conflicts among anglers along the Canal, especially on commercial striped fishing days. A meeting between these groups in late February was summarized in a March 5 memo to the Massachusetts Fisheries Advisory Council (MFAC).

At the meeting, ACOE indicated that they would provide DMF with a letter providing incident documentation and the challenges fishing intensified. Both Bourne Police and MEP also stated they would review their records from prior years regarding Canal incidents and determine if there were trends that pointed to elevated activity on commercial fishing days. DMF asked that this documentation be provided to the agency to allow them to weigh the appropriateness of taking any emergency action (if warranted) to address this issue in 2020.

In a letter to DMF on March 31, ACOE outlined their concerns regarding how commercial striped bass fishing activity along the Canal is negatively impacting their ability to provide enjoyable recreational opportunities to all visitors. The letter includes the following statement:

“On commercial fishing days…the population of fishermen increases and thus, competition for space along the service roads intensifies significantly. This surge in visitation brings with it specific issues the U.S. Army Corps of Engineer Rangers struggle to keep up with. An increase in overcrowded conditions, litter, erosion, complaints of fishermen making loud noises, public urination/defecation, illegal parking, reports of theft, fishermen casting at boats, verbal altercations between members of the public, in addition to aggressive behavior amongst fishermen are all problems that our Park Rangers contend with regularly during Striped bass season. Rangers have witnessed and received public complaints about violations of Striped bass regulations including; the taking of too many fish, size violations, high-grading, hiding fish in the bushes or in vehicles, fileting fish before transport, fishing without the proper license, and illegal sales. Rangers have found trash bags filled with whole Striped bass carcasses hidden in the woods and our trash cans regularly contain fileted carcasses disposed in them.”

Commercial striped bass season opens on June 24, 2020 in Massachusetts, and is open on Mondays and Wednesdays. It is a rod-and-reel-only fishery, and striped bass must be at least 35 inches long to be sold commercially. Recreational striped bass fishing in Massachusetts is open all year with a slot size limit (28″ to less than 35″). Now that recreational and commercial fisheries are segregated based on size of fish, MEP will be able to better differentiate between commercial and recreational fishing activity. If the Canal were to become a recreational-only fishing area, then any angler retaining striped bass that measure 35” or larger or more than the one fish recreational bag limit would be in violation of the recreational only rule. This is expected to improve enforcement and compliance and help validate enforcement tips from other anglers.