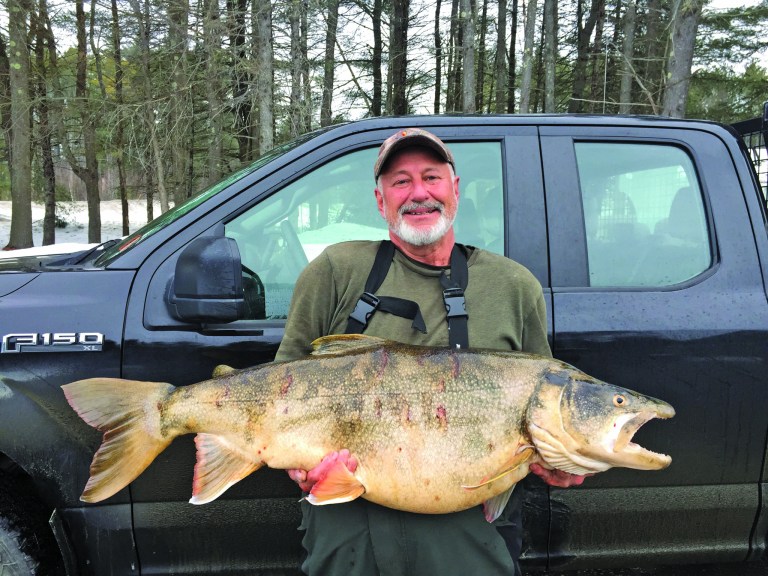 On Tuesday, February 25, Thomas Knight of Meredith, New Hampshire, caught an enormous lake trout while ice fishing in northern New Hampshire. The fish was certified as a new state record, eclipsing the one established in 1958.

After a lengthy battle, Knight was able to bring the fish onto the ice and marvel at its size. An experienced lake trout angler, Knight knew that the prevailing record was 28 pounds and his fish seemed to be much bigger.

After a few phone calls to some close fishing buddies, Knight made his next call to Andy Schafermeyer, a Fisheries Biologist with the New Hampshire Fish and Game Department. In order to certify a fish’s size as a state record, it must be inspected and verified by a biologist.

The two met and began the process of measuring the characteristics that would certify this fish as the largest lake trout ever caught in New Hampshire.

“I’m not sure who was more excited,” said Schafermeyer. “I knew the fish stood a very good chance of breaking the record.” The two men placed the laker on a certified scale that measured a maximum weight of 30 pounds and the fish’s weight exceeded that.

“At that point, I knew that Knight had caught a new state record, but I didn’t know by how much,” continued Schafermeyer. The quest for a larger, certified scale was on as the two men drove around sharing the excitement of the situation. Finally, at a package distribution center, a scale with the proper state certification was located that had the capacity to measure a large weight.

When the display finally settled on 37.65 pounds, the two men, who had only met hours earlier, shared a heartfelt handshake and pat on the back. As phone calls and text messages poured in, Schafermeyer finalized the remaining inspection and paperwork.

“Most state records, when bested, are done so by only a few ounces. Knight’s fish shattered the old record by over 9 pounds. This fish is now the largest lake trout caught in all of New England. I’m glad he got it, this couldn’t have happened to a nicer guy,” said Schafermeyer. The fish measured over 40 inches in length with a 27-inch girth. Schafermeyer estimated the fish to be between 50 and 60 years old.