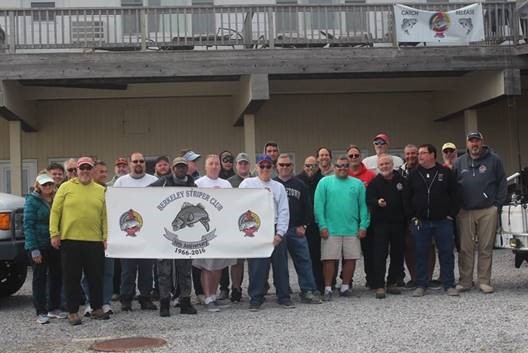 Above: The Berkeley Striper Club on their Annual Montauk Trip, 2019.

At the recent January meeting of the Berkeley Striper Club (BSC), membership voted to suspend a more than 50-year-old club tradition of providing awards to members for their striped bass “Intra-Club” weigh-in tournament. For 2020, the club will continue their length-based awards, but have chosen to stop the “weight” based division due to the current state of the striped bass fishery.

According to BSC President, John Kravchak, “Even though the numbers of striped bass weighed in for this year-long club event was minimal, with the current stocks being declared overfished, we thought it was the right thing to do moving forward. Our club’s decision was symbolic of what all anglers must consider when choosing to run or participate in any striped bass kill tournaments”.

This follows the club’s 2015 decision to no longer participate in historic “Multi-Club” tournaments between New Jersey fishing clubs. The BSC has been at the forefront of striped bass conservation efforts for over a decade. In 2010, they decided to change their long-running Spring Striped Bass Tournaments to a length-based catch and release format.

This first of its kind public tournament in New Jersey has flourished since it’s transition to catch-and-release. Funds raised through the Spring and additional Fall events has allowed the BSC Fisheries Defense Fund to provide more than $50k in financial support to conservation-minded organizations and striped bass research through academic institutions including Monmouth University, UMass and Rutgers University. This continual evolution has allowed the club to focus on decisions that are best for the fishery, with the hope our decisions and actions will result in an abundant striped bass stock that our members and their families will be able to enjoy for years to come.