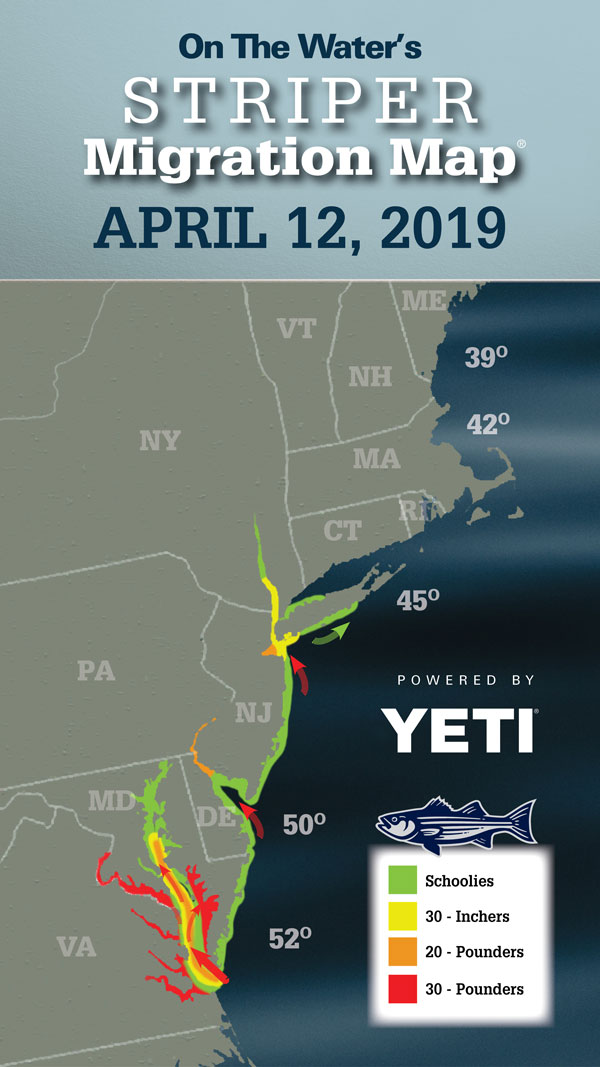 This year appears to be 1 or 2 weeks ahead of the slow start we experienced in 2018. Pre-spawn striped bass to 30 pounds have been moving into northern New Jersey. These fish are most likely Hudson stock, and they are taking advantage of the huge schools of bunker in the area. In Chesapeake Bay, the striper spawn is on in many of the rivers as surface water temperatures warm. Warming inshore waters have improved the bite for schoolie striped bass in the bays at the west end of Long Island and migratory schoolies are moving along the beaches. Follow along as we track the Striper Migration. You can help by contributing to our weekly map updates—simply share your striper fishing reports here, and on social media with tag #stripermigration.

The Maryland Dept. of Natural Resources is reporting that the striped bass began spawning in the upper Choptank River in earnest and the pace will pick up in the next week or so as water temperatures come closer to the optimum 64.5 degrees. Surface water temperatures are close to 60 degrees but unfortunately salinities are extremely low due to recent runoff, which may cause spawning to occur in areas normally considered downriver of the traditional spawning areas. Striped bass should have begun spawning in the upper Nanticoke and Patuxent rivers this week, with the Potomac River not far behind. One good thing about all of the rainy weather this winter — the runoff caused an algae bloom in the upper sections of the spawning rivers in March, to be followed by a zooplankton bloom which feed on the algae. The zooplankton are essential food for the striped bass larvae.

The Calvert Cliffs Nuclear Power Plant warm water discharge continues to be a big draw for light tackle jigging. The action there for large pre-spawn striped bass has picked up as the fish make a pit stop in the warm current to break the chill on their way up the bay. Large soft plastic jigs tend to be the favorite presentation but butterfly jigs also work well.

Out in the main stem of the bay along the steeper channel edges some have been trolling with large barbless parachutes and bucktails behind planer boards. This catch-and-release fishery for the large pre-spawn striped bass moving up the bay has been spotty at best.

Striped bass are being caught and released near the Route 90 Bridge this week. Most all are below the 28-inch minimum but there is plenty of action, and that is what most are looking for this time of the year. The fish are being caught by casting out slightly up-current and walking the jig along the bottom as it sweeps past in the current. A few striped bass have also been reported at the inlet.

Fishermen are catching and releasing short rockfish (stripers) on small jigs and bait along the beaches and inside the Delaware Bay. Please consider using inline circle hooks when fishing bait.

In southern New Jersey, the back bay striped bass bite continues to get better especially around the falling tides with water temperatures reaching the low 60’s. Most of south Jersey has had schoolie action with the bigger bass coming from the Delaware River. Schools of migrating bass have been moving into northern New Jersey waters, where there are big schools of bunker. This week, many prespawn fish in the 20-pound class moved into the area to stage before pushing into the Hudson River to spawn.

Striped bass are moving up the Hudson River. River Basin Sport Shop in Catskill has reported stripers being caught at Germantown and along the Greendale section of the river. Schoolie stripers are also begin caught in Catskill Creek.

Backwater areas on the West End of Long Island are holding some schoolie stripers, and the fish are getting more active with warming inshore water temperatures.

A post shared by White Water Outfitters (@whitewateroutfitters) on Apr 9, 2019 at 6:33am PDT

Holdover striper fishing in the Housatonic River and in Connecticut River tributaries has been improving as waters warm and river herring arrive. The first migratory stripers could appear in Rhode Island by the end of next week!