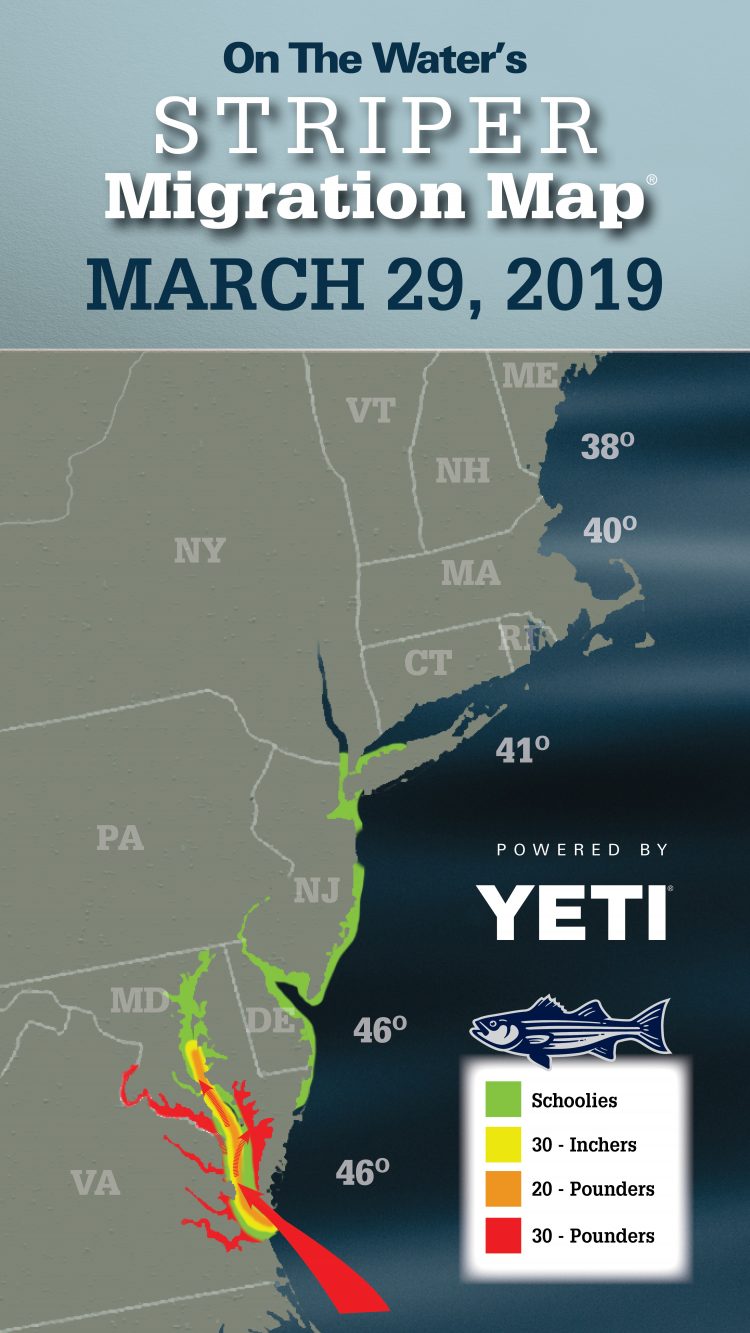 Not much change in the striper migration map this week, with the exception of Chesapeake Bay, where big female striped bass are making their way into the lower and middle bay and heading up into spawning grounds in Chesapeake Bay tributaries. However, warming inshore waters have improved the bite for undersized stripers in Delaware, New Jersey, and the back bays at the west end of Long Island. Follow along as we track the Striper Migration. You can help by contributing to our weekly map updates—simply share your striper fishing reports here, and on social media with tag #stripermigration.

A quick shout-out to the Maryland Dept. of Natural Resources for their excellent weekly fishing reports covering all facets of fishing in Chesapeake Bay. They are reporting large striped bass (females) moving through the lower bay region on their way to the spawning areas of the Potomac, Patuxent and Nanticoke rivers, and passing through on their way to the Choptank River and upper bay spawning sites. The fish tend to be moving along the steeper channel edges using the swifter currents to their advantage, and with water temperatures a bit chilly they tend to be closer to the warmer surface waters. Those trolling with planer boards have a shot at some fun catch and release fishing. Others have been jigging over medium-sized striped bass they spot along channel edges with their depth finders.

The back bay striped bass action is off to a great start with consistent bites occurring in the Shrewsbury, Navesink, Manasquan, and Toms rivers. Raritan bay has also been giving up fish from the bay beaches and there are many reports of huge schools of bunker. The fish are almost all shorter than 24 inches but a few over 28 inches have been caught as well.

Backwater areas on the West End of the island are holding some schoolie stripers, but the fish have been mostly inactive due to the cool water temperatures.

Holdover striper fishing in the Housatonic River and in Connecticut River tributaries should improve as the fish will only get more active once the water begins to warm.