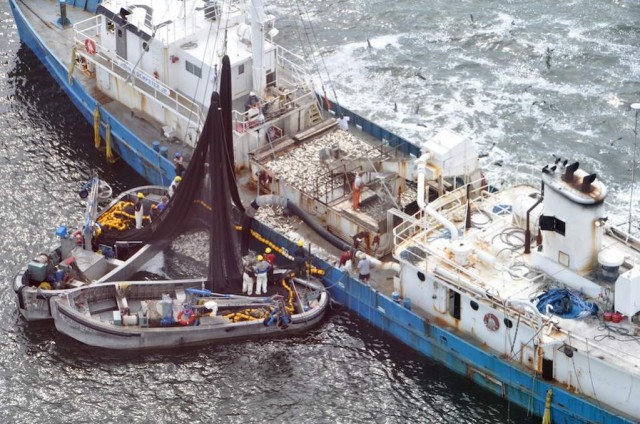 The industrial harvest of this important forage fish by a single foreign-owned company, Cooke Inc.’s Omega Protein, has a negative impact on striped bass and other sportfish that rely on menhaden for food. Earlier this month, MSC—a private international organization, not a government entity—signaled that it would likely put its stamp of approval on Omega’s menhaden reduction fishing operation, in which the oily baitfish is harvested and reduced into meal, pet food, and other products.

MSC reached this conclusion in spite of the fact that menhaden stocks are less than half of what they would be without industrial harvest, which currently suppresses the striped bass stocks on the East Coast by about 30 percent. Striped bass are the single most valuable marine recreational fishery in the country.

“This certification would put a blue ribbon on the practice of robbing sportfish of their forage base, even as striped bass numbers decline in the Atlantic,” says Whit Fosburgh, president and CEO of the TRCP. His organization collaborated with a legal team to object to MSC’s findings and rallied individual anglers to sign an open letter opposing the certification. “We felt it was important to put pressure on MSC, in every venue possible, not to do this. It is irresponsible to call Omega’s operation sustainable when it affects striped bass numbers and the recreational fishing economy.”

MSC’s published assessment indicates that the certification of sustainability would be granted on the condition that Omega reach certain milestones over four years—not because the operation can be considered sustainable now. Sportfishing groups objected to the rationale behind two of these conditions and the MSC’s overall method of assessing the stock’s status.

“The MSC certification undermines ten years of work by the Atlantic States Marine Fisheries Commission to establish ecosystem reference points for Atlantic menhaden, a process expected to be concluded in the next year,” says Mike Leonard, vice president of government affairs for the American Sportfishing Association. “For sportfishing businesses on the East Coast, the stakes are very high going into the striped bass season. Menhaden are an important food source for striped bass, and the latest striped bass stock assessment shows a continued decline in spawning stock biomass. This is the worst possible time for MSC to make a misstep like this.”

The TRCP is asking anglers to sign an open letter to MSC here.