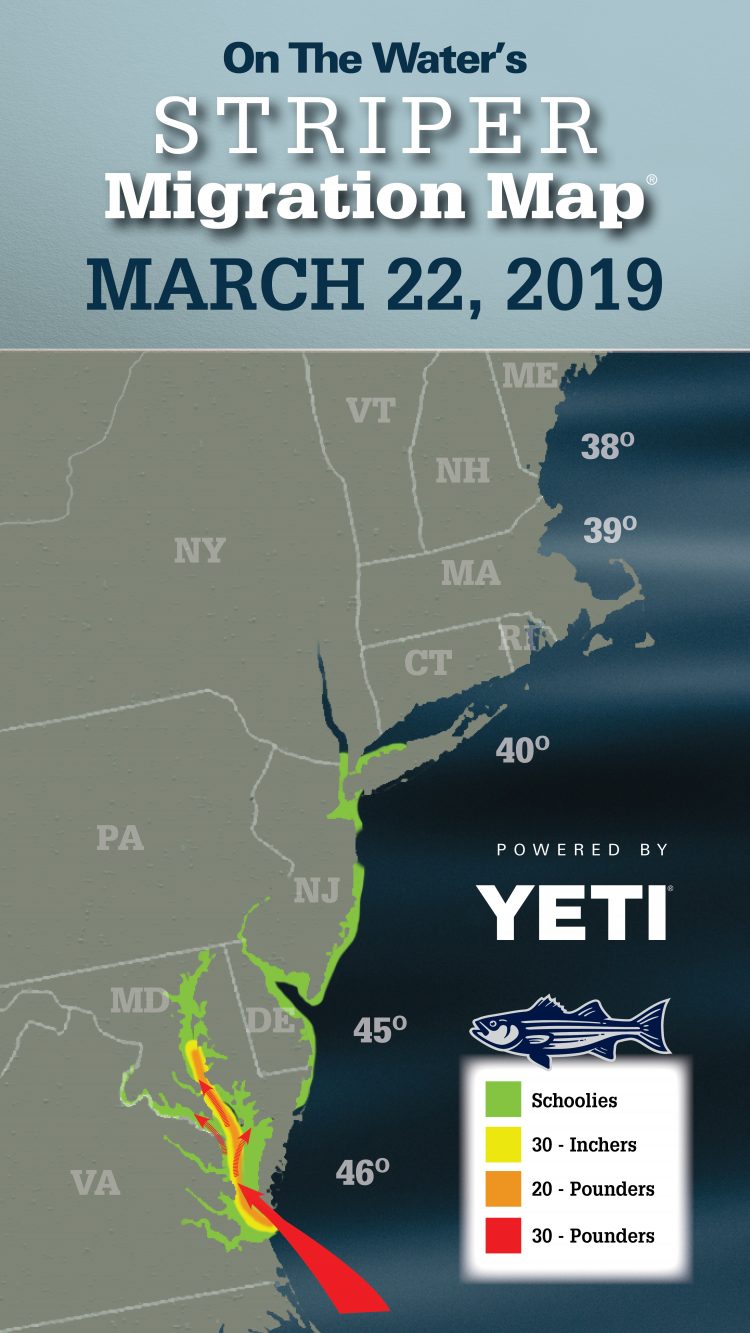 The striper migration has begun! March came in like a lion, but inshore waters are warming and the striper migration is progressing. Striped bass are moving toward spawning grounds in Chesapeake Bay tributaries, and smaller stripers are getting active in warming inshore areas in Delaware Bay, inside New Jersey rivers and backwaters, and in the back bays at the west end of Long Island. Raritan Bay has even had reports of massive schools of bunker! Follow along as we track the Striper Migration. You can help by contributing to our weekly map updates—simply share your striper fishing reports here, and on social media with tag #stripermigration.

On the upper Chesapeake, surface water temperatures are holding around 45 degrees and rising slowly. Pre-spawn striped bass are arriving and catch-and-release fishing for them is getting off to a good start. Catch-and-release fishing for striped bass in the main portions of the bay is beginning to gain more interest from anglers. Striped bass can be found along channel edges of the bay and jigging has been a favorite way to target them. The Calvert Cliffs Power Plant warm water discharge pipe is attracting more catch-and-release fishermen each day as large female striped bass are moving up the bay towards spawning rivers. Drifting in the warm water plume and jigging with large soft plastic jigs or butterfly jigs is the ticket to this exciting action.

In inshore areas of upper Delaware Bay, short rockfish (stripers) are being caught and released, mostly by anglers fishing bloodworms and grass shrimp for white perch.

The back bay striped bass action is off to a great start with consistent bites occurring in the Shrewsbury, Navesink, Manasquan, and Toms rivers. Raritan bay has also been giving up fish from the bay beaches and there are many reports of huge schools of bunker.

Backwater areas on the West End of the island are holding some schoolie stripers, but the fish have been pretty inactive due to the cool water temperatures.

Holdover striper fishing in the Housatonic River and in Connecticut River tributaries should improve as the fish will only get more active once the water begins to warm.