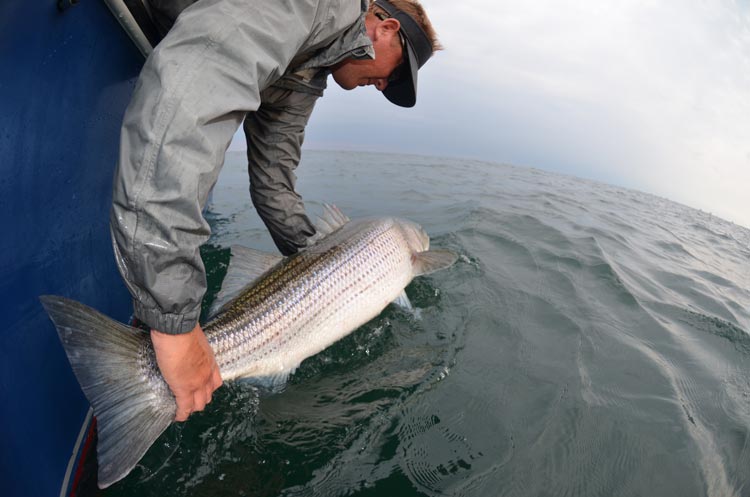 1/30/2019 UPDATE: The Division of Marine Fisheries has scheduled two public hearings to take comment on these proposals. Read full text of the proposals here.

The Division of Marine Fisheries will also accept public comment through 5PM on Friday, March 1, 2019. Please address all written comments to Director Pierce and submit to DMF by e-mail at marine.fish@state.ma.us or by post to 251 Causeway Street, Suite 400, Boston, MA 02114.

The Massachusetts Division of Marine Fisheries (DMF) will be proposing to implement two new conservation measures for the striped bass fisheries aimed at minimizing the number of fish that are killed through hooking and releasing. The proposed measures would prohibit the use of gaffs and mandate the use of in-line circle hooks when using live or cut natural baits.

The Massachusetts recreational striped bass fishery is primarily catch and release. Our anglers release about 93% of all the striped bass they catch. Discards in the commercial striped bass fishery, though difficult to quantify, are also believed to make up a significant share of the catch, especially given the larger minimum size for that fishery. Studies have shown that about 9% of released striped bass will die from the effects of hooking and handling (called release mortality). Given that recent stock assessments have shown that fishing mortality is increasing, we think it is time to institute some broad-based and effective measures to lower the mortality rate and ensure the future health of the striped bass stock.

We have heard from many anglers that feel a no-gaffing rule in the striped bass fishery is a no-brainer. Using a gaff to assist in bringing your catch aboard causes significant injury to the fish and there is often no way to tell the precise length of this fish until it is removed from the water. Given that our fisheries release large numbers of striped bass that are just below the legal size limit, we feel it is irresponsible to continue to allow the practice. Numerous other Atlantic coast states have already implemented such a provision in their striped bass fisheries, including Maine, New Hampshire, Connecticut, Maryland, and Virginia.

The mandatory use of in-line circle hooks is the single most effective way to decrease mortality in striped bass. There are many studies that demonstrate the efficacy of circle hooks in lowering release mortality in striped bass and other species. Deep hooking (i.e., when the hook catches in the esophagus or gills rather than the lip) is the major contributor to release mortality. It has been demonstrated that the use of circle hooks, as compared to j hooks, greatly reduces the incidence of deep hooking and therefore mortality. The latest catch estimate from the revised Marine Recreational Information Program (see page 7) indicates that Massachusetts recreational anglers released almost 13 million striped bass in 2017. If we apply the release mortality rate of 9%, that means over 1 million striped bass died after being released. That’s compared to only 300,000 that were taken home and eaten! Clearly the mortality resulting from fishing in Massachusetts can have an effect on the striped bass population. That’s why DMF is proposing the mandatory use of circle hooks for anglers using certain natural baits. A study in Maryland found a 90% reduction in mortality when using in-line circle hooks. Imagine if we could reduce the number of release deaths from over a million fish to 100,000!

DMF will be bringing the proposal to implement these two conservation regulations to public hearing this winter. We seek the public’s input on certain aspects of how the regulations will apply. For instance, should the gaffing and circle hook rules apply to the recreational, for-hire, and commercial sectors universally or should some groups be exempt; should artificial lures with bait (e.g., tube and worm) be included? We hope to see you at the public hearings and let us know your opinion.