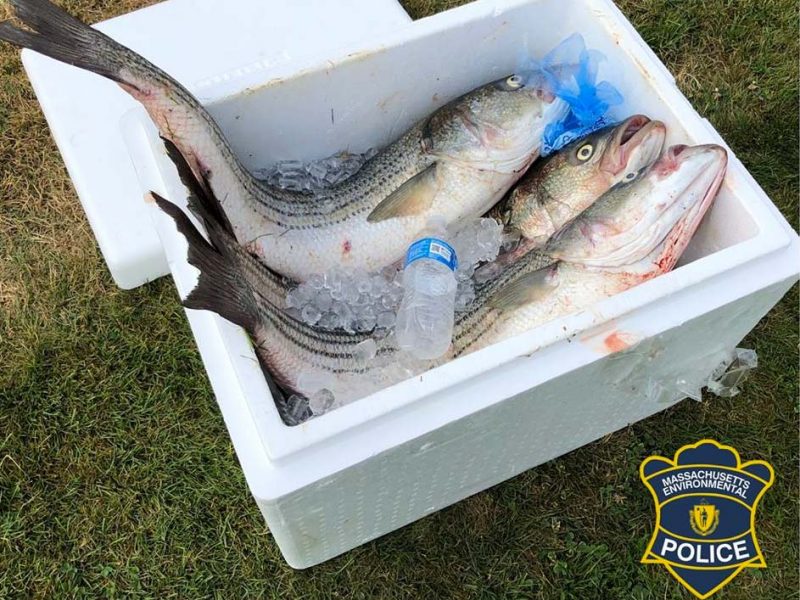 On the afternoon of Tuesday, July 17, 2018, Massachusetts Environmental Police Dispatch received a call from a concerned fisherman regarding individuals along the Cape Cod Canal that appeared to be harvesting striped bass over the daily recreational legal limit of one fish per person, a minimum of 28-inches in length. Information provided by the informant indicated the individuals were shuttling fish back to their vehicle, then continuing to harvest additional fish.

Based upon the descriptions provided by the caller, officers were able to locate the individuals and observe the area from a distance. During this period, officers observed one of the individuals return to his vehicle. The Officers subsequently initiated a compliance check and determined that the three individuals possessed double the legal daily catch limit of striped bass.

The three individuals were charged and issued notices to appear in court. The catch and the fishing gear were seized; the catch was donated to the Plymouth Area Coalition in Kingston.

The Massachusetts Environmental Police appreciate the stewardship exhibited by the citizen who saw something – and said something. Conservation of the environment is everyone’s responsibility, your eyes and ears can be some of our most valuable tools.