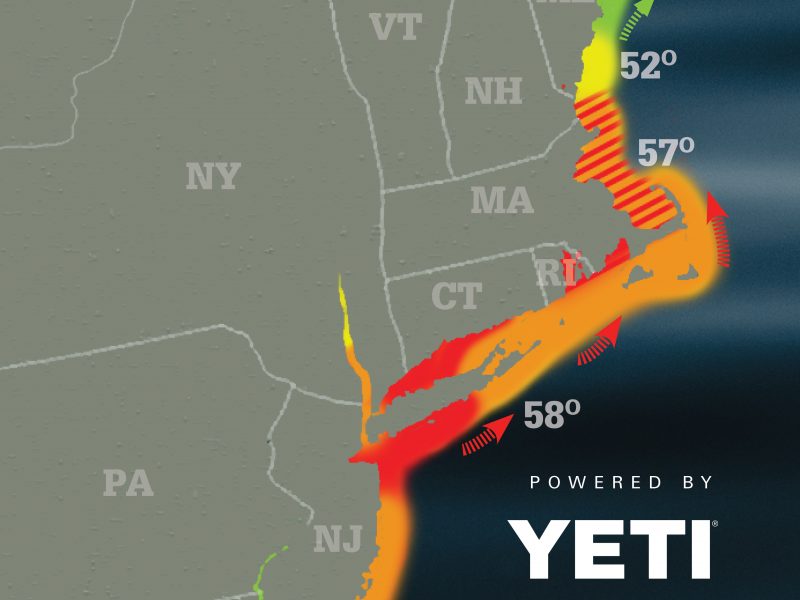 The big bass continue to swim north, with 30-plus-pounders reported north of Boston this week. There are still big bass in New Jersey, but the new moon and the biggest tides of the month are bound to shake things up next week, moving more large stripers into New York and New England.

You can help by contributing to our weekly map updates – and get featured here and on the OTW Instagram – simply share your striper fishing reports here, and tag us on social media with #stripermigration.

The large stripers have left the Bay and headed north.

Warming waters have pushed many large stripers north out of Southern New Jersey, with the fish that remain being active mostly around dawn, dusk, and at night.

There are still schools off large bass off Monmouth County, but the fishing seems to be on the slide. That could be due to the weather and lunar phase more than the state of the migration. The new moon this coming week will be telling as to whether or not the best of the run has already passed New Jersey.

The best action for big stripers is off western Long Island. The big bass just haven’t settled into the East End yet, with a couple exceptions, including a 43-pound surf-caught bass from Montauk this week.  The fishing on the East End should continue to improve with the approaching new moon.

Stripers up to 45 pounds, with good numbers of 25- to 35-pounders are stacking up in Long Island Sound, with more expected to move in on the new moon.

This Spring run is absolutely crazy. I can’t tell you how much I’ve learned with my buddy @johnbratz fishing the Striper migration this year. We pinpoint the bait every time we go out, and follow these schools down the coastline until new waves of fish show up locally. There’s a new class of fish that show up every other day!! These are all local waters. You definitely cannot beat it! Had multiple fish last night and they were all between 20-25lbs. Last week they were 30-40lbs. Week before that it was 15-20lbs, and before that John landed a 50 pounder! You really never know what’s gonna show up at the grounds, and that’s why you gotta spend less time sleepin, and more time with lines in the water. Something special about this time of year that I dream about all Winter up until May and June, and it’s finally here! #sleepwhenyouredead #stripermigration #stripedbass #moronesaxatilis #rastamansaysreleaseher #liveyourbestlife #doingwhatwelove #katah #localwater #bunkerblitz #getoffthecouch #theresfishoutthere #caughtinthewater #fishermansparadisect #joebaggsnation

A school of fresh stripers, with most fish ranging from 24 to 36 inches hit Martha’s Vineyard and Nantucket Sound. The Canal and Buzzards Bay had few fish this week, as the last big school of fish seems to have migrated through into Cape Cod Bay where fishermen reported good-sized bass chasing around schools of squid.

North of Cape Cod, there have been sporadic reports of big stripers, but the fishing has been inconsistent. While there are steady numbers of keeper-sized fish to 20 pounds, the occasional very large bass, including a 50-incher from Plum Island and a 48-incher from Boston Harbor, have kept things interesting.

More larger bass have been reported in Northern New England, including some topping the 20-pound mark!

I’d say the @allpointsfly striper tournament is off to a good start. Twitched a 9” fly in a small pocket on my first cast of the morning and this gal crushed it. #striper #stripedbass #maineflyfishing #striperonthefly #stripermigration #flyfishing #flytying #fishme #MCSBT