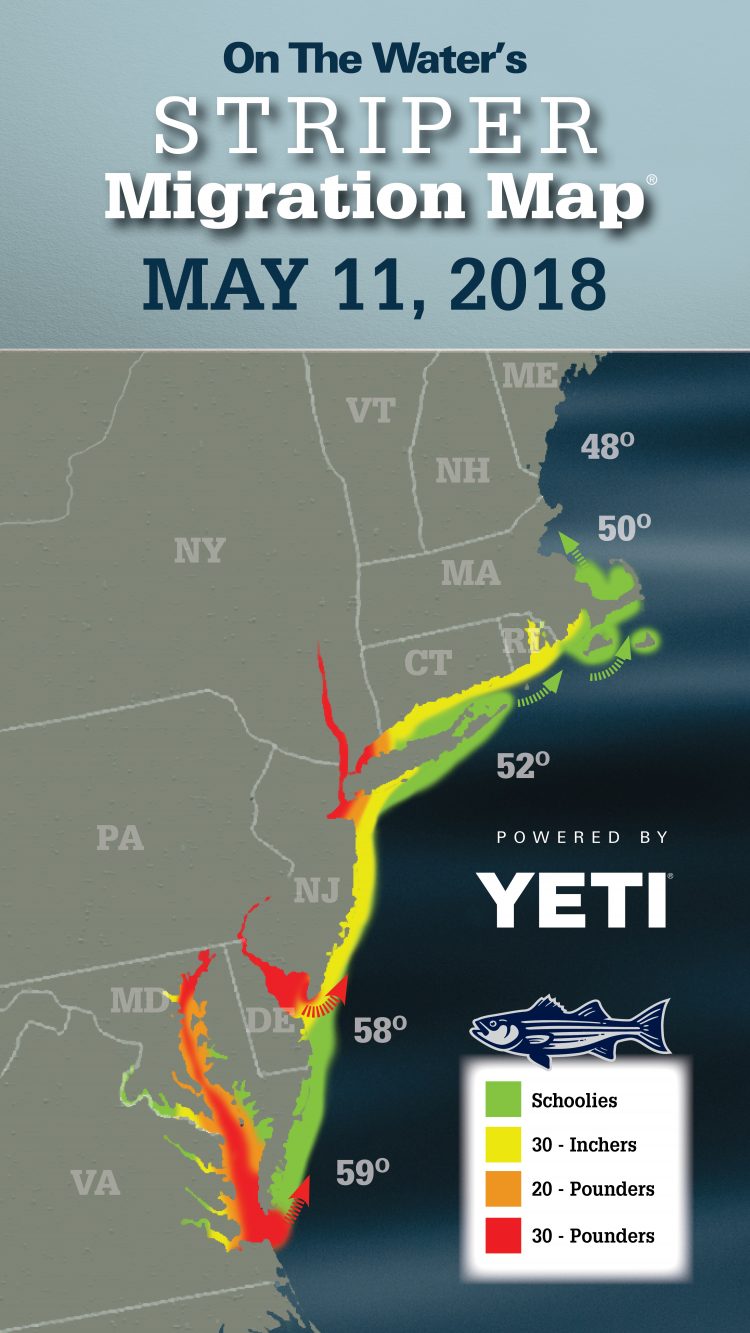 Spawning activity continues in the upper Chesapeake, but most of it is completed in the major rivers and big post-spawn bass are moving back down the bay toward the open ocean, where they’ll be taking a hard left toward the Northeast.

You can help by contributing to our weekly map updates—simply share your striper fishing reports here, and tag us on social media with #stripermigration.

There are a mix of pre-spawn, spawning, and post-spawn fish in the Delaware River and Bay right now. Reports of long, skinny bass, some up to 47 inches long, have been reported around Cape May, suggesting that some of the Delaware River spawners are leaving the bay and heading North.

Besides the big bass rounding the Jersey Cape, and the big bass in Raritan Bay, most of New Jersey has only keeper-sized fish, with the exception of a few 20-plus pounders taken around Barnegat Bay, both in the bay and along the beaches. These could be some of the early-arriving post-spawn Chesapeake fish or post spawn fish from the Delaware.

More of the Raritan Bay fish have been making their way up the Hudson, but there are still plenty of fat, egg-filled females feeding in the bay.

There are more stripers showing up in the surf, and keeper-sized fish are a possibility just about anywhere from Cape May to Sandy Hook.

More big, egg-laden bass are moving up the Hudson River, and by now, some should be spawning around West Point on the upcoming new moon, with stripers continuing to spawn in the Hudson into mid- and even late May.

Fins up and ready to spawn. Released this healthy fish back to where it came from. I don't eat striped bass and I try my best to preserve the natural ecosystem we all share. I hope to see future generations to experience the same enjoyment of catching these creatures as I do. #surfcaster #surfcastersjournal #tacticalangler #ticarods #tica #fishing#instadaily #hookedup #catchandrelease #brooklynfishingclub #springrun #surfcaster #stripedbass #bluefish #낚시스타그램 #낚시꾼 #낚시 #낚시스타 #onthewatermagazine

Keeper stripers have made it as far as East Hampton on the South Shore according to some reports, and schoolie stripers are all around Long Island right now.

May the fog be with you. Great first trip of the season. #stripedbass #onthewatermagazine #rifishing

Schoolie stripers continue to spread out around Cape Cod, with reports of fresh fish in Cape Cod Bay and on the South Shore of Massachusetts.

Keeper stripers hit the south side of Martha’s Vineyard and Buzzards Bay this week, while big schools of small stripers were reported in the Cape Cod Canal. The striper reports from the South Side of the Cape have been a little more sporadic, but favorable winds next week, combined with the new moon, should help move better numbers into the area.

North of the Cape, schoolies have been reported all the way up to Duxbury this week.