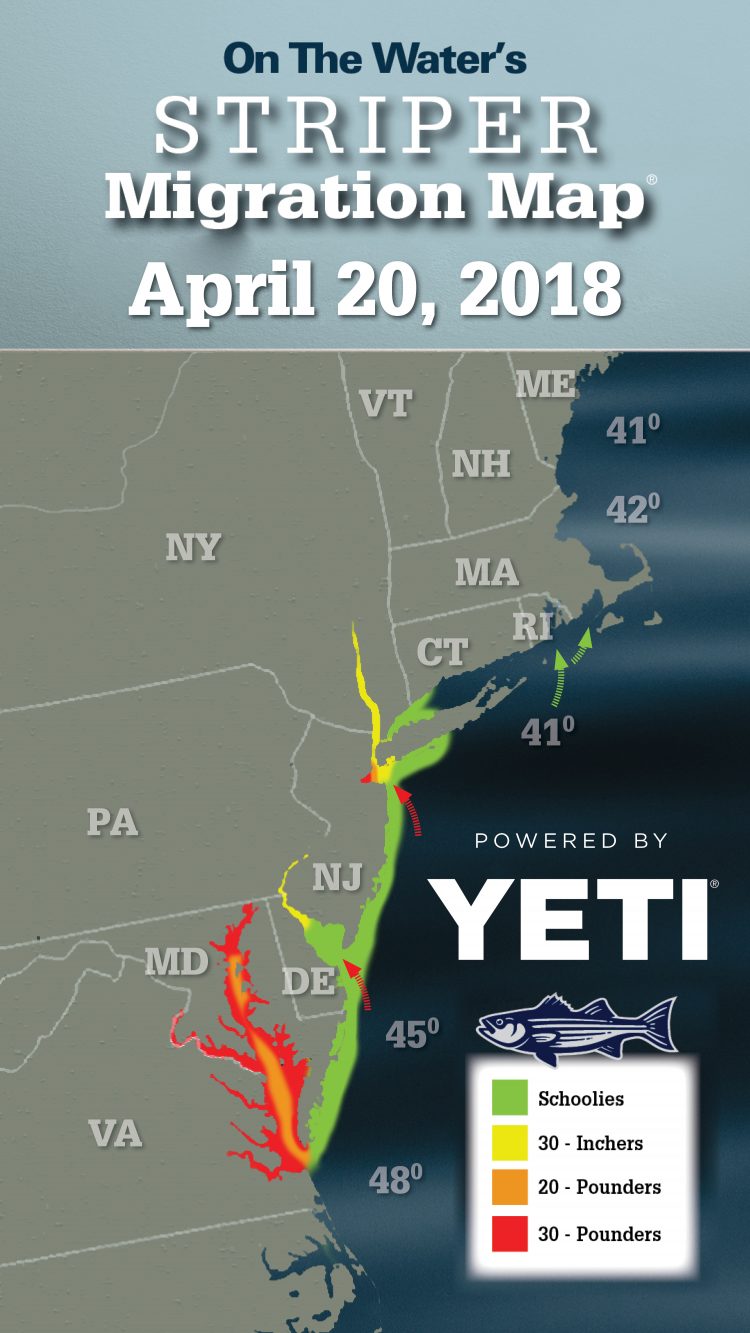 Water temperatures are still colder than usual for this time of year but the stripers, it seems, are tired of waiting for them to pick up. Big schools of big stripers continued to feed around the Raritan Bay this week. Migratory schoolie stripers are rapidly spreading north and east, with rumors of fresh fish coming from as far north as Buzzards Bay.

Big stripers are working up the Hudson to spawn, and fish are finally spawning in the Chesapeake even though water temperatures are below optimal levels for spawning bass.

Follow along as we track the Striper Migration. You can help by contributing to our weekly map updates—simply share your striper fishing reports here, and tag us on social media with #stripermigration.

The striped bass spawning in the Choptank, Nanticoke, Patuxent and Potomac rivers is behind schedule due to colder than expected water temperatures, and spawning in the upper Chesapeake Bay is most likely weeks away, reports the Maryland DNR. This week the spawning area in the Choptank River registered 56 degrees and there is a minor amount of spawning occurring. Usually spawning begins at 60 degrees and is optimal at 64.5 degrees, so many female striped bass are still holding in the spawning reaches. Based on predicted weather forecasts, it may be another week or so for water temperatures to be correct in that area. Cold water temperatures in the Susquehanna Flats are also holding back the striped bass spawn area and the arrival of the larger females.

Striped bass catch-and-release season ends April 20. The minimum size for striped bass during the trophy season, which opens Saturday the 21, is 35 inches. Pre-spawn striped bass will be the most common large fish being caught and it will be a tough decision for some to keep these fish or release them.

The Calvert Cliffs Nuclear Power Plant warm water discharge continues to be the place to jig for large female striped bass. All of these large female fish are of course pre-spawn and most likely on their way to the upper bay spawning site, so they need to be handled with great care.

Cold weather has hampered fish activity and fishing efforts. Small rockfish (striped bass)  have been caught from shore and pier between Augustine Beach and Port Mahon. Bloodworms are the top bait along with chunks of menhaden.

As an angler advisory, note that striped bass spawning season began April 1 so retaining them is prohibited north of a line from the south jetty at the C&D Canal to the Pennsylvania state line. In addition, you must use non-offset circle hooks when fishing with any bait in that area. The same restrictions apply in the Nanticoke River and Broad Creek.

Big pre-spawn stripers continue to feed in Raritan Bay as they make their way toward the Hudson River. Bass as large as 40 pounds have been reported by both shore and boat fishermen. Throughout the rest of the state, it’s been mostly schoolies bass with a few keepers around, although at the opposite end of the Jersey Coast, down in Cape May, a few large stripers, most likely Delaware River spawners, have been taken.

Mel Martens at Giglio’s Bait and Tackle in Sea Bright said his customers have been into the Raritan Bay bass and they’ve been taking some big fish. He reported the fish he’s seen are fine looking specimens, very clean and free of sea lice.

He’s a little surprised the fishing is so good with the water still on the cold side. Bone-colored SP Minnows and yellow and chartreuse metal-lipped swimmers have all been catching fish.

Dave Arbeitman at the Reel Seat in Brielle reported small bass biting in the Manasquan River and they’ve been joined by a few bluefish at the bay end of the Point Pleasant Canal.

Fin-Atics in Ocean City reported that striped bass have been the dominant catch in the back bays of Ocean City and near the mouth of the Great Egg and Tuckahoe Rivers. Most of the fish have been hitting white or pink soft plastics along with bloodworms.

The Cape May area had some bigger striped bass to 28 pounds caught off the beach on bunker chunks and the jetties around the Ferry terminal have been producing shorts on soft plastics.

Large stripers are working their way up the Hudson River, feeding along the way on herring and bunker.

Out on Long Island, it’s still mostly schoolies, but as water temperatures warm, more and larger fish are beginning to creep eastward along the island.

At Causeway Bait and Tackle in Wantagh, they report there have been a few schoolie striped bass being caught in the back bays locally.

Talked to Jeff today at White Water Outfitters in Hampton Bays he said, there have been a few holdover striped bass being caught in their area of Long Island.

Carmine at the Camp-Site Sport Shop in Huntington, he said the striped bass have been moving slowly into the area from the west. Schoolie sized bass have been caught from the shore in the harbors on small lures, while the few boats out have been catching larger sized fish.

In Connecticut’s rivers, the holdover bite is excellent. Mike Roy, of Reel Cast Charters, reported that the striped bass fishing has continued to improve in the rivers, and he expects things to really heat up over the weekend and into next week. Large soft plastics have been the ticket, but as the herring continue to arrive in better numbers, large swimming plugs should get the job done as well.

Rumors are churning about fresh striped bass taken along the Rhode Island oceanfront, but it sounds like things are just barely getting started. In the rivers and backwaters, holdovers are stirring, eagerly taking small soft plastics. It’s past time for numbers of fresh bass to have reached Rhode Island, so look for schools of fish sporting sea-lice to arrive any day now.

Holdover striper fishing continues to provide steady action from Cape Cod up to Boston, but other than a single fish sporting a single sea louse, there’s been no word of migratory stripers yet. As of Friday morning, there’s been no word of migratory bass hitting the south side of Martha’s Vineyard, which is typically the first place fishermen find fresh stripers in Massachusetts.