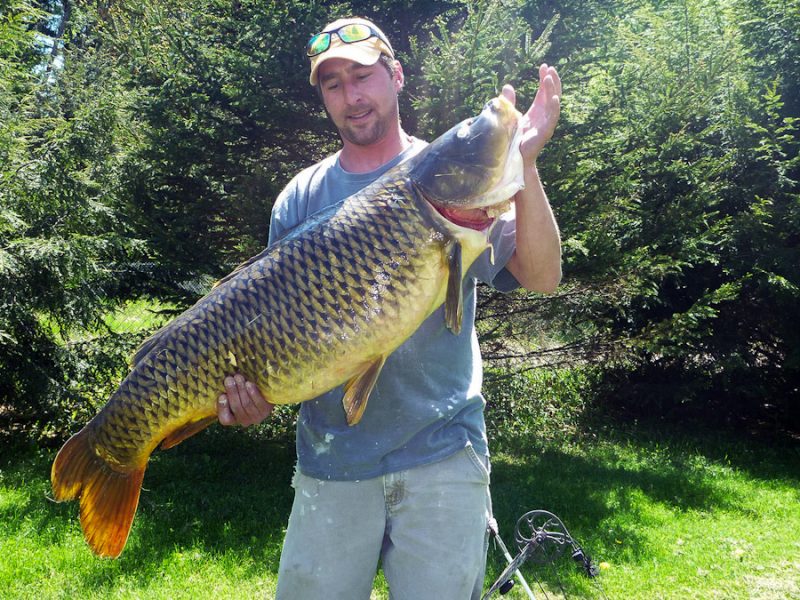 A Shoreham, VT angler took a new state record carp on May 20 from the Vermont waters of Lake Champlain.

Darren Ouelette was bow-fishing for carp with Taylor Patterson in a backwater area of southern Lake Champlain when Darren spotted a very large carp cruising just below the surface in some flooded trees. Drawing quickly and taking aim, Darren arrowed the 44-pound 6-ounce giant, and then fought for over 20 minutes to land it on his fishing-modified compound bow.

“I knew it was a pretty big fish when I first saw it, but I didn’t think it was as big as it turned out to be,” said Ouellette.

“When Darren finally got it in close, I tried to net it but I could only fit its head in the net,” added Taylor. “I ended up just grabbing it in the mouth by hand and swinging it in. I was shocked at how heavy it was when I went to lift it.”

Darren’s fish eclipses the previous state record carp by nearly two pounds. That fish was taken by bow-angler Jeremy Ballantine in May 2013 on the Connecticut River and weighed 42-pounds 8-ounces.