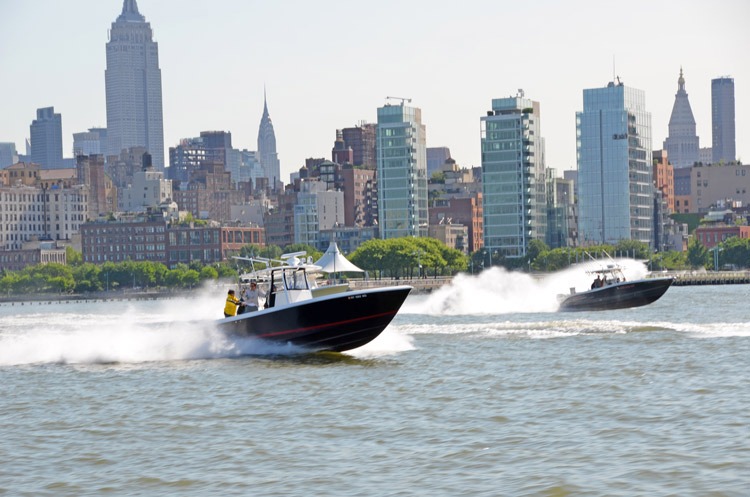 The corner of 44th and 5th around 6pm on a spring Thursday is a universe away from any imaginable fishing spot. On a spring Thursday last May it was the spot. Inside, the kickoff cocktail party for the 15th Annual Fishermen’s Conservation Association (FCA) Manhattan Cup was about to start.

You can look at life in New York City from an infinite amount of angles. There’s an undeniable energy and a history that speaks for itself. The aromatherapy on a summer day is torture, and the crowds can be suffocating, yet the spontaneous, surprising, enlightening, and entertaining always show up here. I had to remind myself, while listening to World Record holder Greg Meyerson talk of his 81.88 pound striper, that it was channels of concrete and asphalt outside and not waterways to the ocean. Former Miami Dolphin Jim “Crash” Jensen spoke about his work with developmentally disabled kids in Florida. Fishing is his approach to helping them break through their struggles. Reports of the day’s scouting around the New York Bight were setting the stage for epic fishing early the next morning.

Chelsea Piers on Manhattan’s west side settles just about any challenge that suburbia poses to the city for recreation. Ice hockey, soccer, marinas, a golf range, restaurants with a view, and just about every other imaginable sport are available here. As oblivious as most New Yorkers are to the abundance of life swimming in the waters that surround them, so was the car, bike and foot traffic passing by Chelsea Piers on May 17. The top fishermen, captains and crew from the tri-state area and beyond loaded bait, reviewed rules, and told half-truths about where they thought the bite would be. The ribbing and jabbing of local anglers, mixed with recapping struggles during and after Hurricane Sandy, would find pause before the starting horn sounded. Jaw-dropping stares at some of the boats competing, such as Insufishent Funds from New Jersey, halted conversations. Pride, appreciation, and respect ripped through us all as the brave from the Wounded Warrior Project found their way to their boats.

The Fisherman’s Conservation Association has sponsored the Manhattan Cup for the past 15 years. Many who are the heart and soul of the tournament didn’t question if there would be a 15th after Sandy. The storm almost delivered a knockout punch to their marinas, boats, and homes, but seven months later the Manhattan Cup went on as planned.

As the armada neared the Statue of Liberty, the boats went their separate ways—some toward Shrewsbury Rocks off Jersey, others up and down the rivers hugging Manhattan, and the rest around the waters of the New York Bight.

The Katfish, captained by Vinny Vetere, glided through the ferry wakes on the East River on the way to his spot. Surprising as the rough seas of the Hudson were, more intriguing was our captain in his striped bass bandana.

He was quiet while working, like most of the great ones are. We held back and went our separate way as the boats scattered. I knew he knew something.

In my decade or so as a city dweller, I had always wondered about the East River and the stripers it held. Casting on a leap of faith, I wanted to believe. My striper “Santas,” as I thought of them, never stopped for the bucktails and Gulp eels I left out.

Resident schoolies and post-spawn cows taking the north route via Long Island South abound under barge, ferry, and dinner cruise traffic. Many say they’d never eat a fish out of the East River, but few know for the most part, the fish are the same ones thrown on a grill in Long Island and New Jersey backyards all summer.

Reports of a slow pick of blues and stripers crackled on the radio. Much the same was happening for Team Urban Anglers. We pulled up our lines and were on our way to the heart of the NY Bight, laughing at and texting buddies at work as we passed the Financial District.

“It’s right here! There’s fishing right here!” We laughed at past anguish caused by the assumption that in the city, there’s a million things to do, fishing not being one of them.

Bass and blues started to come up from favorite spots of the captain, and from the usual spots on both sides of the Ambrose Channel. Coincidence or conspiracy found someone on one of his spots. We gave a friendly wave to try to confirm one or the other and we headed across the channel. Wind against tide only brought frustration and a few blues. With one hour until the incoming tide and three hours until we had to be back in, there was a lunchbox blitz on board.

In the lead-up to the Manhattan Cup, meeting long-time supporters and anglers of the tournament, a pride and appreciation for their home waters was clearly apparent. Generations upon generations have fished these waters. There wasn’t much to concern those generations about the topics of conservation and pollution. To understand the confusing, illogical tides and movements of water from every direction around New York is a special piece of knowledge. That knowledge gets handed down and learned by the tops in the fishing game here. Passion, responsibility, and more passion by guys like Vinny Vetere, Frank Crescitelli, Bill Paciello, Steve Byrne and countless others among the ranks of the FCA have dealt with and continue the fight to maintain and grow the fishery.

The FCA members and supporters don’t just work on maintaining and preserving the New York fishing opportunities, but work to share its glory with those who may have never experienced it. While on vigilant watch against illegal poaching, legal and illegal dumping in areas like Jamaica Bay and off of Staten Island, the FCA is also instrumental in introducing fishing to the heroes from the Wounded Warrior Project and those fighting battles with autism and other obstacles in life.

It was a lot of words from a guy known for few. The wind and tide were at our backs, a hot-knife-through-butter kind of ride. The day, what it had been so far, and the shining skyline in front of us just couldn’t have set up better. The hypnotizing vibration of the Katfish suddenly slowed and we were angling toward the American Veterans Memorial Pier off the Belt Parkway. Hardcore pier fishermen can be an odd breed. They frantically reeled up and Vinny turned to us, offering a buck for each guy we got, but no one on our team could process what was going on. Our mate John started throwing our recently deceased, but still fresh bunker at the crowd. Within seconds, the pier fishermen turned into hoops players boxing out, and Team Urban Anglers was tossing fish like the guys in Seattle. The captain chuckled and we all asked who got it on video.

The coastline of northern New Jersey, Staten Island, Manhattan and Long Island, and its fish population are unique. Behemoth oil tankers and freighters dwarf the speckling of 18- to 23-foot center consoles during the striper, bluefish, and fluke seasons. There’s a constant struggle to balance the reality of the needs and end products of life for millions living around these waters and the beautiful and bold finned creatures that flourish and fight to remain a healthy population. Pounds of filets collecting ice crystals in the freezer can never compare to the wriggle of a bass from your hands after a catch.

A bit up the river, we were getting set up. The lines were laying perfectly, and a bridge made for the perfect shade waiting on the bite. One little wiggle, two little wiggles, no little wiggles. Vinny said she was just checking it out and that something would eat. Few more wiggles and a blue from the east river was giving me the yellow malocchio.

Hundreds of fish were caught and released during this year’s Manhattan Cup. There was no shortage of pictures, videos, stories, fist bumps, and a few relocations in the live release division. Boats outfitted with a Striper Tube were able to keep their biggest fish for release back at Chelsea Piers at the end of the fishing day. Chris Cuomo of CNN, brother of fisherman-friendly New York State Governor Andrew Cuomo, grabbed the top prize for live release in the bait division. Top Chef Tom Collicio won for live release in the fly division. Victor Place rounded out the live release winners for largest bass on artificial, not to be outdone by his son Rob who won the striped bass fly award for his fish just shy of 14 pounds. When speaking with Rob, I was becoming more and more familiar with the feeling he had. There’s a lot of fishing to be done on the north and south shores of Long Island and out in Montauk, but to have a legit day of fishing in the city is something special.

Captain Vinny swapped out his striper bandana for a hat from my home marina as everyone was heading inside. Drinks, and laughs, and drinks and food, and an auction better than any reality show filled the next few hours, but I couldn’t spot the hat I had given Captain Vinny or his bandana. Looking outside, I saw the empty slip. I’m sure there was a charter the next morning. He likes to see people catch fish—he told me so. He was as different a captain as he was from any other I’ve ever fished with. The database in his head of the how, when and where of migrating and resident bass in these waters was mind-boggling. His passion to share this gift of a resource here in New York is echoed by the rest of the captains and the FCA.

The overall prize for the tournament went to the most fitting of all anglers in the Manhattan Cup. Retired Army Specialist, James O’Leary, now with the Wounded Warrior Project and his 33-pound striper earned him the Cup.

Project Odyssey, among other programs run by WWP, is one of many assisting our vets in acclimating to life after combat. James lost part of his left lung (among other injuries) as a result of a mortar attack on Forward Operating Base Chosin during Operation Iraqi Freedom in July of 2004. O’Leary told me how important events like the Manhattan Cup are to the continuing efforts of WWP. “War doesn’t end when the warriors come home.”

The sun went down, and many boats untied and headed for their home port. With a bagful of gear from generous sponsors like Carhartt, Igloo and others slung over my shoulder and still wearing a sweet pair of new Costas from the live auction, the best day of city fishing I ever imagined came to a close.

Now I just have to figure out where to get the rod holder for the baby carriage when taking walks by the river.

For more information on the 2014 Manhattan Cup, which is scheduled for Friday, May 30th, visit www.manhattancup.com