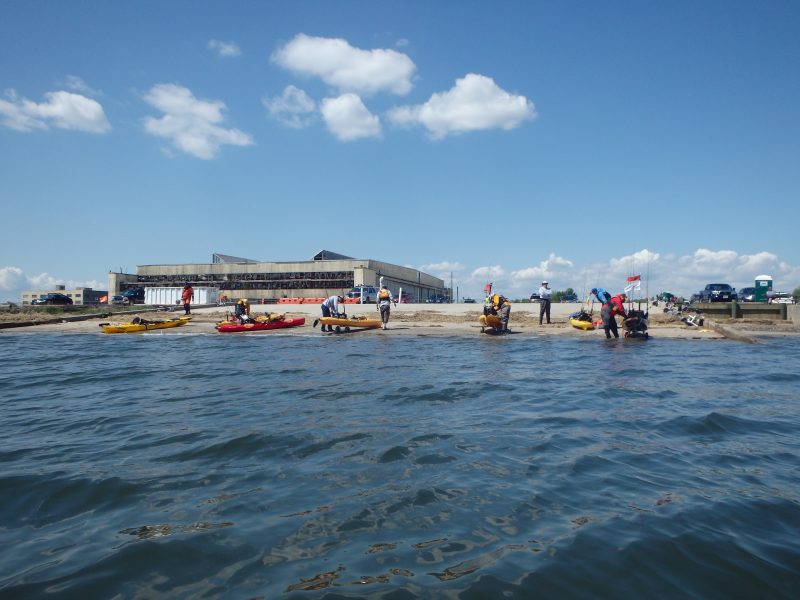 It seems like most of kayak fishing community was hanging out on Jamaica Bay, New York last weekend! Every spring, hundreds of kayakers head to the bay for the largest kayak fishing tournament in the Northeast. The tournament is held at the Gateway National Recreation Area’s Jamaica Bay unit, with camping and festivities held at Floyd Bennett Field right on the shore of the bay.

The 2014 Jamaica Bay Kayak Fishing Classic was held May 16 to 19 and attracted almost 300 kayak anglers from Virginia to Maine—there was even a contingent from Canada. The tournament is run by Captain Jerry Collins and his right hand man George White of Captain Kayak in Sayville, New York. Jerry took over hosting the tournament some years ago and has built the tournament into a must-attend event for kayakers in the Northeast.

In its 11th year, the tournament has built a reputation as a great event to kick off the fishing season, not only because of the great fishing, but also because of the camaraderie among the participants. The tournament is less about competition and more about going out and having fun with fellow kayak fishermen.

The whole tournament is set up to create a place where kayak fishermen can go to have a good time. The event is four days, with three days of tournament fishing and entry includes camping out at Floyd Bennett Field. Friendships are forged both on the water and in the campground; you can imagine the fish stories that are told every night!

The tarmac at the bay is quickly turned into a tent and RV city with fishing kayaks parked everywhere. The kayaks can be wheeled to the launch from the camping area and much of the evening is spent rigging and talking kayaks and fishing. For those who aren’t up for roughing it, there are hotels around, and the shops and restaurants on Flatbush Avenue take the edge off the camping experience.

Jamaica Bay is the perfect place for a tournament of this size, the bay is large enough to accommodate a huge number of entrants, and there are plenty of fish to catch. The bay is a wildlife refuge and there is an amazing variety of birds, many drawn in by the abundance of marine life. It is amazing to see all the life and activity and be able to look up at the skyline and see both the Freedom Tower and the Empire State Building!

The tournament is focused on raising money for charities. Jerry is a strong believer in supporting charities with a local impact and uses the tournament to raise funds for fishing-related charities. In 2013, the tournament provided $14,500 to the supported charities. The 2014 charities supported all do important work in their communities. Heroes on the Water is a charity that provides therapy to veterans by getting them out on the water kayak fishing, providing a chance to unwind with much-needed physical therapy. Send-A-Kid Fishing gives children an opportunity to get out and get fishing. The Education Center at the Sport Fishing Alliance introduces children to fishing and the marine environment, ensuring that there will be future stewards for our marine resources.

There are special raffles that raise additional funds for the charities, all supported by company donations. Hobie Kayaks stepped up as a major sponsor, providing not only a kayak but substantial support for the charities. Other kayak companies like Jackson Kayaks, Old Town, and Wilderness Systems also provided kayaks. PowerPole, Thule and Lowrance also sponsored the event.

The tournament is a qualifying event for the Hobie Fishing World Championship, the winner of the slam division qualifies for the Hobie Worlds in the Netherlands in October 2014. The Jamaica Bay tournament also featured a raffle for a fully rigged Hobie Kayak with the proceeds going to a scholarship for the tournament winner.

Thursday was the warm-up day with competitors arriving at the bay, setting up camps and doing some exploring. I met up with anglers from New York and Virginia and found some slow but steady fishing, we all picked up slams of weakfish, bluefish, and striped bass. It was a good day on the water with a nice variety of fish.

The competitive fishing was planned to start at noon on Friday, but with a small craft advisory and forecasted winds at 20 to 30 mph, tournament fishing had to be shut down for the day. Participants were unfazed, some stayed and hung out at the campgrounds comparing notes on kayak rigging and local fishing tactics while others found sheltered water to fish. I was in a group of anglers hiding in a lee cove when a bluefish bite went off. The winds were gusting a bit over 30, so we beached the kayaks and proceeded to pound the blues from the shoreline!

Saturday offered much nicer conditions and it was the first day of fluke season in New York. The striper bite was slow, so many opted to test the waters for other fish and found that the fluke were around. There were some weakfish, but not in the strong numbers that we found last year. Bluefish were everywhere and everyone got more than a few of them. Despite a long day on the water, there were few slams posted on Saturday, leaving Sunday as the deciding day.

On Sunday the bluefish again ruled the day. The most popular lures in the bay are pink plastics, but the blues were reducing them to bits! Some anglers were livelining bunker and quickly getting their baits bitten in half. The slam division winner Elias Vaisberg dialed in on the bass and blues with bunker, then went off to his secret fluke haunt and pulled up a nice flattie. After a tough Saturday, Elias put together a winning slam in just a few hours on Sunday morning!