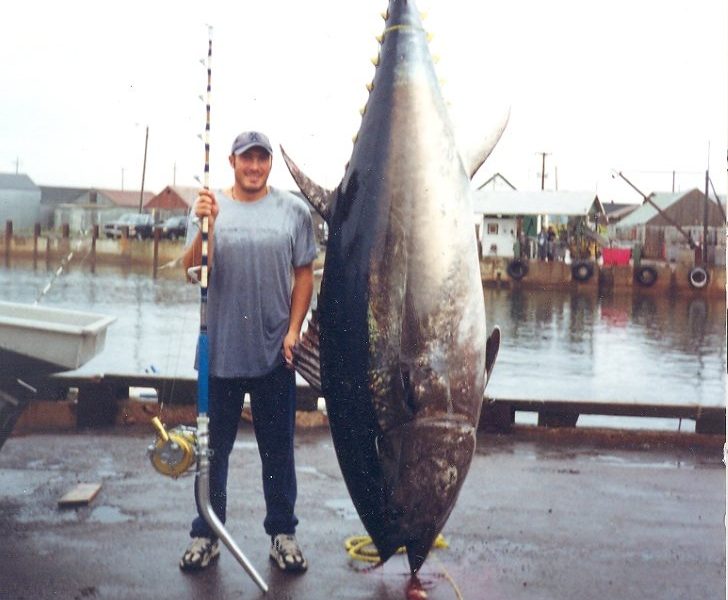 How big does a bluefin tuna grow in 16 years?

Thanks to Al Anderson, a charter boat captain out of Point Judith, Rhode Island, we have an answer. A bluefin tuna that weighed a mere 14 pounds when Anderson caught it in the Mudhole southeast of Block Island in 1997 grew to more than 1,200 pounds by the time it was recaptured by a Nova Scotia fisherman in 2013.

This tagged bluefin is believed to be the third longest at-liberty bluefin recaptured, as it had been at liberty for 5,855 days (16 years).

Anderson started tagging 45 years ago when he was a graduate student in fisheries biology at the University of Rhode Island. Over the years, Anderson and his charter clients have tagged tens of thousands of striped bass, almost 5,000 bluefin, and 1,500 sharks.

Ask him today why he tags so many fish, and he’ll cite the career he ultimately settled into. “I’m a fisherman,” he said. “I want to know where the fish go.”

Bluefin tuna travel widely and fast. Anderson once recaptured a bluefin off Rhode Island that had been tagged 10 days earlier near New Orleans. In that brief time the fish traveled at least 1,600 miles. And bluefin tuna that Anderson first tagged have been recaptured off the coasts of Turkey and France

These conventional tags provide snapshots of data when the fish is tagged and again when it’s recaptured. For a more detailed picture, scientists also deploy PSATs— pop-up satellite archival tags that record temperature, depth, and light intensity every ten seconds, with the timing of changes in light intensity used to estimate latitude. The PSATs detach after a year or less, then float to the surface and transmit summary data via satellite.

“When I started tagging bluefin, there were so many they were a pain in the neck,” said Anderson. “I would put lures in the water for striped bass, and schools of small bluefin would leave me with no line on my striper outfits.”

That was in the early 1970s, when there was little market for bluefin tuna. Today they’re prized for their fatty flesh, and a single bluefin can net a fisherman over ten thousand dollars.

“We see a lot fewer of them today,” Anderson said.

Watch scientists tag a bluefin tuna with a satellite tag in an episode of On The Water TV filmed with Captain Eric Stewart.