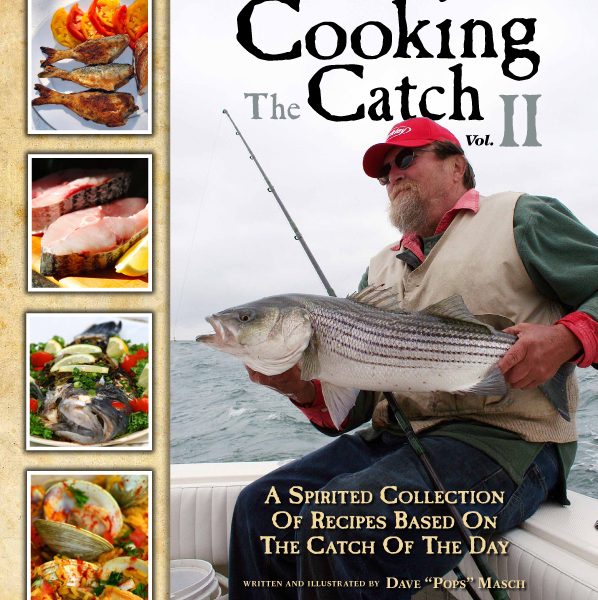 Dave “Pops” Masch is back with a classic and not-so-classic mix of recipes and salty musings in his new cookbook, Cooking the Catch, Volume II. From stripers, bluefish, scallops and tuna to eels, sea robins, spearing and skates, Pops explains the means to catch, clean, cook and, of course, eat the bounty that we enjoy in the Northeast. Pops shares recipes for each month of the year with a fisherman’s understanding of the rhythm of the seasons, reminding us that each passing day brings new experiences, new possibilities and, of course, delicious food from the sea.

A gifted storyteller with a salty sense of humor, Dave “Pops” Masch’s Cooking the Catch II is more than just a cookbook. It’s a journal of a man who spends his life on and in the water and a celebration of the spirit of the Northeast, embodied by the colorful characters who share meals at Masch’s table.

Dave “Pops” Masch’s “Cooking the Catch” and “Ask Pops” columns have been appearing in On the Water magazine for over 14 years. Masch earned his cooking chops and nickname during his 29 years as a cook and counselor at the Penikese Island School, an institution for troubled teenage boys on an otherwise deserted island off the coast of Cape Cod, Massachusetts. Pops lives on Cape Cod and continues to cook fish and shellfish that he collects himself or accepts as gifts from friends and family.

Order your copy of Cooking The Catch II from the On The Water Bookstore.

Reviews and Press for Cooking The Catch, Vol. II:

“Masch takes us through a full year of seafood on the Cape, providing recipes for whatever is running or in season. Most of the seafood used in the recipes can be caught right here in our own back yard.”

“The recipes all are mouth-watering, but equally appealing is all of the solid advice Masch offers. Cooking The Catch is an important book for every New England fisherman to own.” – Tom Meade, Providence Journal

“Mr. Masch’s conversational tone makes you feel like you’re chatting with a friend over a beer instead of turning the pages of a cookbook.” – Joanna McQuillan Weeks, The New Bedford Standard Times

“Cooking the Catch isn’t your run-of-the-mill fish and seafood cookbook, in part because the meandering essays that accompany the recipes are as enticing as the dishes themselves. Masch is a great writer and his book is more in the tradition of, say, Jim Harrison or John Thorne than Emeril or Mario. It’s also very funny.” – Ted Scheffler, Salt Lake City Weekly