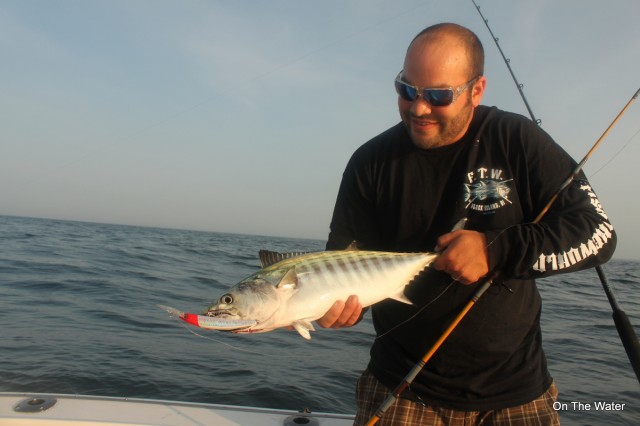 Late in the work day on Thursday August 17, just after putting the finishing touches on a great September issue and making live the Fishing Forecast, a call came down from the Captain’s chair. Neal Larsson, or “Cap” as he is affectionately called around the office, summoned me and Jimmy Fee into his office. On the agenda was the next day of work. This work would entail the three of us headed Southeast from Falmouth Harbor to the Hooter to get into the steady bonito fishing that has been reported out there. Truly a work mission though – we needed some fresh “funny fish” photos.

It was a beautiful morning and it wasn’t long until Neal had On The Water’s 30-foot Blackwatch throttled back to about 7 knots. A mix of new Seeker Stealth rods and some personal combos were all neatly rigged up with 20-pound-test Seaguar fluorocarbon leaders with an assortment of proven bonito lures clipped on the business ends. Yo-Zuri Crystal Minnows, in both deep-diving and shallow-running models were rigged on the trolling outfits, while a few Swedish Pimples in some new and classic colors were rigged on the casting rods. A mini jigging Hogy on a darter head rounded out the aerial attack.

“Let them back here boys” Neal called out. We dropped back the swimming plugs that we hoped would fight through some pesky bluefish and find their way the bonito we were targeting. Trolling in about 40 to 60 feet of water, we were soon tripled up with a nice bend in three rods. With Neal being on fire lately with his “calls,” he surveyed the three bent rods and chose one as Jimmy and I deferred first pick to the Captain. Jimmy and I handled our 3- to 5-pound bluefish without a problem, but Neal called it right once again and brought a fat bonito boatside. I have to admit, I was a bit jealous since I have never caught any one of the “funny fish” species that are available each summer.

Neal’s catch not 20 minutes into the fishing was a good sign that today was going to be the day for my first bonito. Now knowing what to look for in a bent rod to improve my chance of grabbing the “right” rod, I waited for the next wave of bites. A few minutes later, two rods doubled over. Jimmy and I looked at each other, looked back at the rods, and both reached for the one that was paying out line a bit faster than the other. Even though he had caught “bones” before, we both wanted the same rod. I managed to nudge him off the rod with the old “shoulder lean and grab,” and soon had color with stripes circling close to the boat. Neal neatly and skillfully netted the fish so that the hooks didn’t get wrapped up in the netting so we could take some photos of the freshly caught beauty of a bonito.

I love adding new fish to “the list,” and was all grins as Jimmy had me maneuvering the fish in all kinds of ways to improve the light and angles to benefit the “official” reason we were out there – shooting photos. Jimmy snapped away and then asked me to reposition the fish. As I did, I felt the bonito tense up and started to freak out. As it cartwheeled out of my grasp, and toward the deck, I felt a sting.

“Is that in the shirt or the skin,” Jimmy asked.

Looking down, I saw the answer, “Oh it’s in the skin alright.” The rear treble of the Yo-Zuri was buried into the back of my thumb.

This red/white Yo-Zuri had taken both bonito thus far, so dismantling the plug and hook was out of the question (at least according to Jimmy, who had yet to catch a bonito at this point). Jimmy is no stranger to this process, usually doing the “surgery” on himself. He grabbed the shaft of the hook with a pair of pliers and said, “you’ve been taking it like a champ, but this may hurt a bit.” He proceeded to work the hook through the meat of my thumb until I saw the point under my skin, followed by a “pop” as the point emerged from another part of my thumb. He crimped the barb worked the hook back out of my hand and we were back to fishing.

The lures weren’t in the water for long and we were quickly on more fish. At one point, a larger mystery fish grabbed the “lucky” red/white Yo-Zuri and took off. I had the rod in my hand when I got hit, then the line went slack as we were trolling at 7 knots! I saw a fish come up and crash on the surface and then there was no stopping it. In no time at all, I was staring at the bottom of my spool as the last yards of line flew through the rod. Spooled! Though we can’t be sure, we suspected that it might have been the work of a bluefin tuna, since 200 yards of line evaporated off the reel in seconds!

We went on to tally 6 bonito in 2 hours of fishing, with the Yo-Zuri Crystal Minnow DDs taking all but two. The other two fell to a silver and copper Swedish Pimple and a green and red 5-inch Reef Runner. I caught my first two bonito and what a beautiful and great-fighting fish these specimens are. We all had a blast fishing on the job this morning, and having the first bonito I ever hooked hook me back made for a lot of laughs!