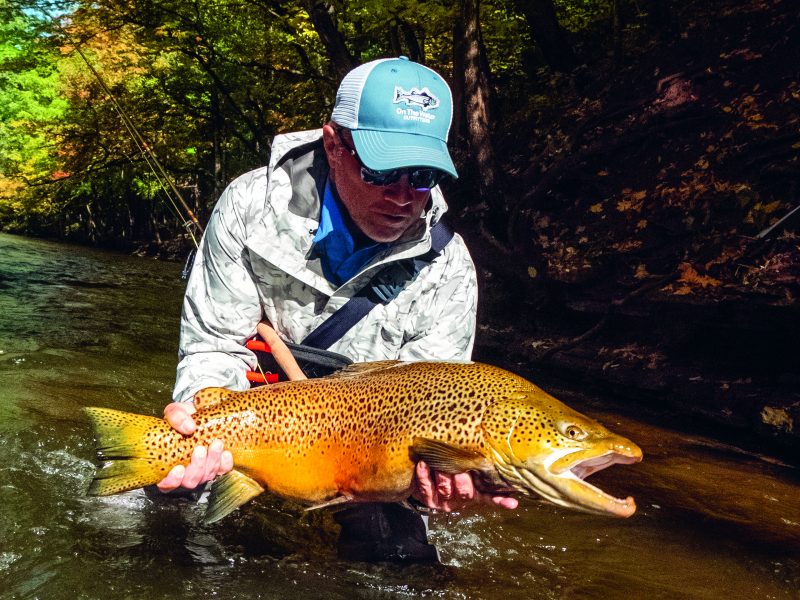 A 10-plus-pound brown trout is only a dream to most anglers. However, an upstate New York brown trout is not only a reality, they are relatively common in Oswego County! The trick is knowing how, when, and where to find brown trout. Unlike salmon, which stop feeding during their spawning migration, brown trout are opportunistic feeders, greedily gobbling up salmon eggs as they move.

Although you might stumble onto one of these giant New York brown trout at any time, there are two prime seasons, spring and fall.

Brown trout in upstate New York are fall spawners; therefore, they move into tributaries of Lake Ontario in September and October; the Salmon and Oswego rivers. That’s the same time you’ll find chinook and Coho salmon in those rivers. In addition to these two major tributaries, brown trout venture up nearly all the smaller streams to spawn, provided there is adequate water flow.

Salmon and steelhead tend to blend in with the overall landscape of the river and stream bottom. Brown trout, however, look like bright, new pennies in a fountain of old coins so they seek out cover, such as undercut banks, overhanging tree limbs, and deep notches in the riverbed.

When it’s time for trout to prepare their redds and spawn, they move to shallow gravel bars where the water is generally no more than three feet deep. For a couple of days before and after spawning, they don’t feed much. However, after a few days, they will be back on the feed as they work their way downstream to Lake Ontario.

After a long, cold winter in the depths of Lake Ontario, big upstate New York brown trout are again on the move. However, now all the action is on the lake, especially, the southeast corner of the lake between the Oswego River and Port Ontario.

This part of the lake has a few unique features that make it the perfect place to target big browns in the spring. Commonly called Mexico Bay, this part of Ontario has a large area of shallow water with very rocky bottom. As spring brings longer days and stronger sunshine, the rocky bottom absorbs and holds the heat better and longer than areas of the lake with deeper water.

Additionally, the prevailing wind is out of the northwest, which holds the warmer water against the southeast shoreline. That water activates microscopic lake life sooner than the deeper cold water, attracting minnows, which then attract brown trout and other gamefish. The result is a perfect place to find big browns in March and April.

By the beginning of May the rest of the lake starts to warm up. The water temperatures even out, and the southeast corner is no longer a unique gathering spot for baitfish and gamefish (though it does become a smallmouth bass hot spot through November).

There are several good places to access the lake from shore. One of the easiest access points is Selkirk Shores State Park, and the entrance is about 3 miles south of Port Ontario on State Route 3.

Both locations have ample parking and are good places to fish from shore. The prevailing wind at both comes from the northwest, which means it blows straight in your face. For anglers armed with spinning gear, this is not much of a problem. However, if you are fly fishing, you’d better know how to double haul and punch into the wind!

Small boats are the best way to fish the shallow water near shore, trolling stickbaits and spoons. The water here is where the bait congregates first and is the best place to find big browns. In March and April, it is not uncommon to find brown trout in the 10- to 20-pound range in this part of the lake. Several years ago, an angler caught a 33-pound brown in approximately 4 feet of water there.

Trying to troll in shallow water presents a couple of challenges. First is not busting your prop on a rock; second is trying not to spook the fish with your boat as you troll. The solution to the first problem is easy: always have a point man keeping a sharp eye. There are a couple of ways to fix the second problem. The easiest and cheapest fix is to run out several hundred yards, cut your motor, and cast as you drift back toward shore.

Another solution, though more expensive, is to buy a set of planer boards so you can send your lures into very shallow water while keeping your boat in deeper water.

It goes without saying that fishing this part of Lake Ontario requires vigilance and respect for the dangers posed. The submerged rocks and that northwest wind can be disastrous if you’re not fully aware of the surroundings at all times. And, the water temperature in March and April can bring on hypothermia very quickly.

Whether spin or fly fishing, remember that brown trout have great peripheral vision. Whenever possible, approach them from behind or far enough upstream that they can’t see you. Browns are very spooky.

Keep in mind that there are abundant natural salmon eggs and minnows in most of the tributaries, so make your presentation a little distinctive. Have it stand out from what the naturals are doing. Slow down the retrieve with your streamers, spoons, and stickbaits. Add a few extra twitches and a little herky-jerky movement to make it look like a wounded minnow that no self-respecting brown trout can resist. 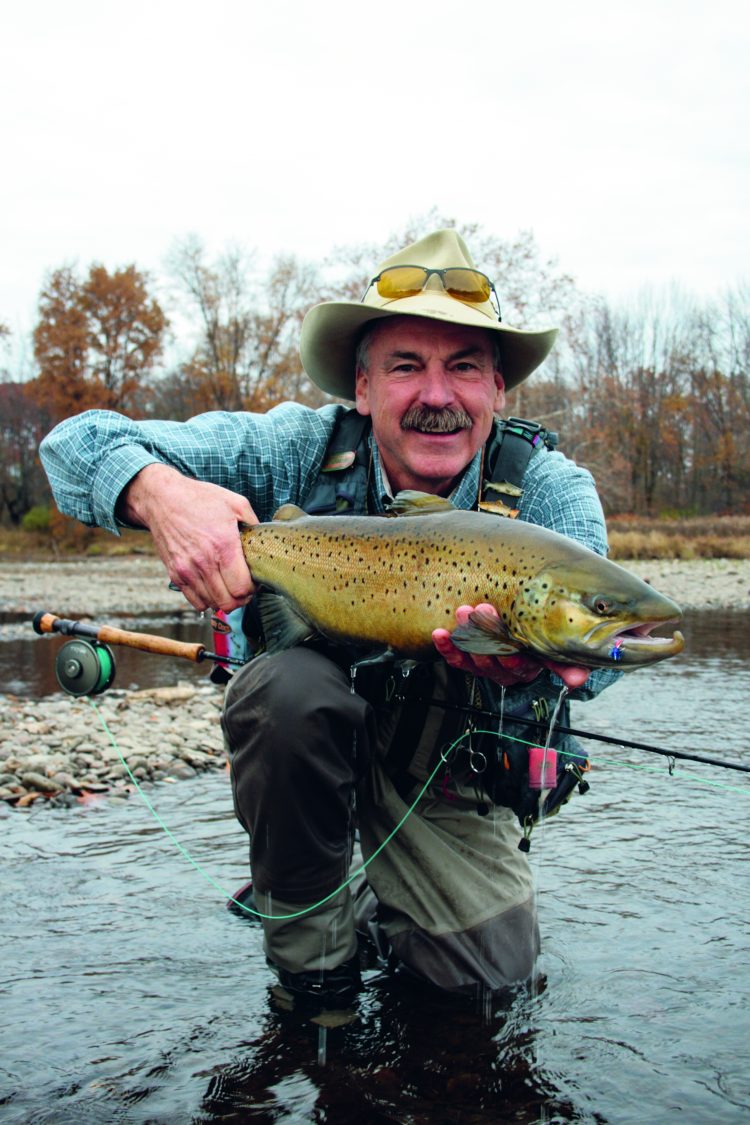 Salmon eggs are the most abundant food source for brown trout, meaning egg sacs for conventional gear or egg patterns for fly fishing are no-brainers. Streamers also do well, especially in riffles between larger pools. If you’re a spin angler, streamers (with a small split shot about 2-feet up from the fly) work fine, as do small spoons, and smaller stickbaits that imitate a variety of minnows.

Brown trout generally school up and hunt bait in packs, much like bluefish or stripers in saltwater. Patience is the key! You might cast in the same area with no action for quite a while and then suddenly everyone in one spot will be crying, “Fish on!” Then, after the school goes through, it’s quiet.

If you stay long enough, the school will probably come around again. Be sure to check your watch and time how long it takes the school to return. It will probably keep passing you at the same interval, give or take a few minutes.

In the spring, the brown trout’s primary food source is baitfish. Fly-rodders should use streamers with erratic, fast retrieves and occasional pauses. Spin anglers should concentrate on 3- to 4-inch stickbaits and ½- to 1-ounce spoons – a local favorite is the “Little Cleo” in green or blue with a hammered finish. Whether you’re brown trout fishing from shore or from a boat, make sure your retrieve is fast with several one- or two-second delays along the way.

For spin fishing, use an 8- to 10-foot, light- to medium-action rod. If fly fishing, go with a 9- to 10-foot, six- or seven-weight one. Brown trout get line shy, so 8-pound test is about as heavy as you can go for your line or tippet. The light line means you will need a reel with a smooth drag and a longer rod to act as a shock absorber.

The same rods and reels that you use in the fall work just fine for fishing the Lake.

If you want a chance to catch giant brown trout, gear up and get to Lake Ontario in the fall or spring and be ready to catch one for the record book.