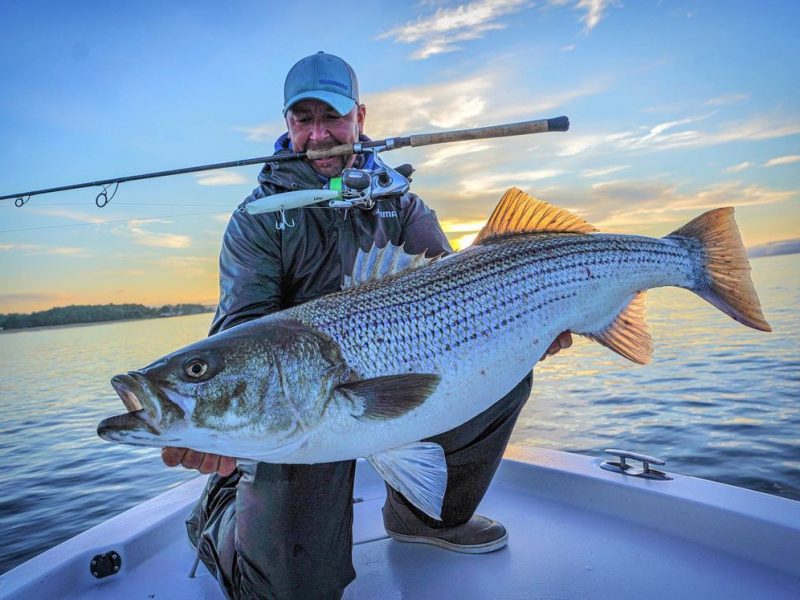 The only thing more exciting than seeing a big striper blast a topwater plug out of the water is actually hooking that bass. A better strike-to-hook-up ratio is just one of the features of the new striper-focused lure from Shimano, the Coltsniper Splash Walk.

Shimano’s Coltsniper line of lures consists of several metal and hard-plastic designs, including the Coltsniper Jerk, Shimano’s souped-up take on the classic minnow plug, with features like an internal weight-transfer system for casting further and through-wire construction to holdup to big bass. The Splash Walk seeks to do the same for the spook-style topwater.

Captain Jack Sprengel of East Coast Charters out of Rhode Island worked closely with Shimano during the development of the Splash Walk, testing prototypes from New England to New Jersey—and the response from the fish was fantastic.

Unlike other topwater spooks, the Splash Walk is heavily weighted in the tail section, which causes it to sit down at rest. “This design keeps the plug glued to the water’s surface,” said Sprengel. That’s a good thing because it means the Splash Walk fishes well even in a crosswind or choppy seas, both of which are difficult conditions to properly work a topwater.

The tail weight also makes it less likely for an attacking striper to push the plug out of its way in its attempt to eat it. I have spectacular memories of watching giant stripers knock topwater plugs skyward, but they are mainly part of my “one that got away” stories. According to Sprengel, the weighting on the Splash Walk helps keep it in the danger zone, even holding true through the “bow wave” created by the approach of a big striper.

Sprengel also noted that the hook placement was designed to retain hooked fish better than other outsized top waters, whose spread-out hooks regularly result in bent split rings. The Splash Walk is not overly long at 7 inches, but it packs 3-3/8 ounces into that compact, tail-weighted body—and that means longer casts. The Splash Walk is less prone to tumbling than other walk-the-dog lures, meaning it’s better for casting through the wind.

A first glance at the lure’s side profile reveals a sleek, spook-style shape, but the chin is cupped, which catches and throws water as the lure turns. This, along with the low-pitch knock, helps get a striper’s attention, even from a distance.

Sprengel said the Splash Walk excels at two different walk-the-dog styles. The first is a tight, splashy side-to-side action achieved with faster twitches of the rod tip. Because of the lure’s unique weighting, it can be made to almost walk in place. The second is a wide and long glide, achieved with a slower cadence.

The Splash Walk comes in six colors. Five are natural patterns that use Shimano’s Kyorin finish for holographic, scaled detailing: squid, bunker, mackerel, sardine, and black back (herring). A sixth color lacks that same level of realism but is a must-have color for topwater lures: bone.