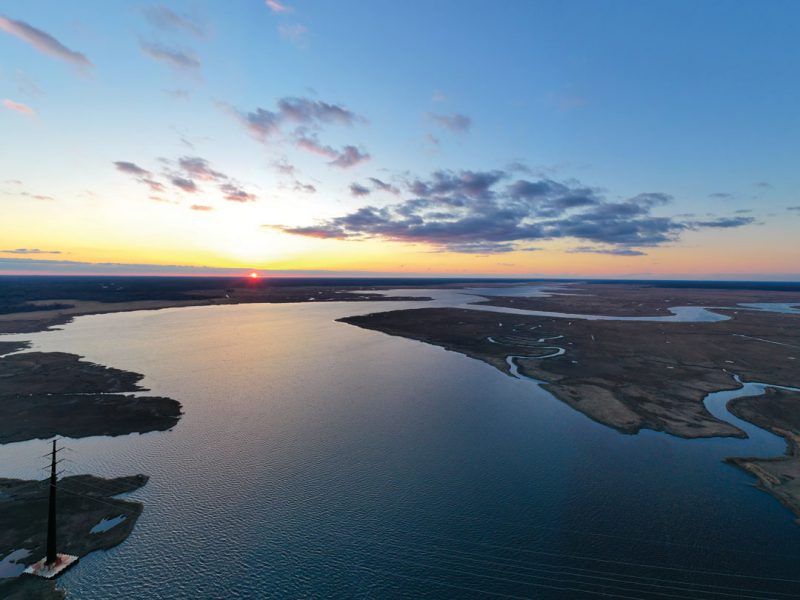 My friend John and I met at a primitive launch where Manheim Avenue in Galloway runs out of real estate and the Mullica River enters the picture. I quickly dumped the river herring that I bought from Absecon Bay Sportsman into the livewell, where they joined the ones obtained at one of John’s secret herring spots. After launching his 16-foot, scarred, scratched, and dented jonboat, he cranked up the noisy two-stroke and we headed on our way upriver.

In the 1980s, my childhood experiences on the Mullica largely consisted of white perch fishing from either the bank or a friend’s dad’s Sea Nymph. We fished different waters across the state and stops at the Mullica were annual, but not what one would consider frequent. We had a blast catching enough perch for dinner and enjoyed missions for pickerel, but this trip with John was entirely different because we were after big, river-run stripers. 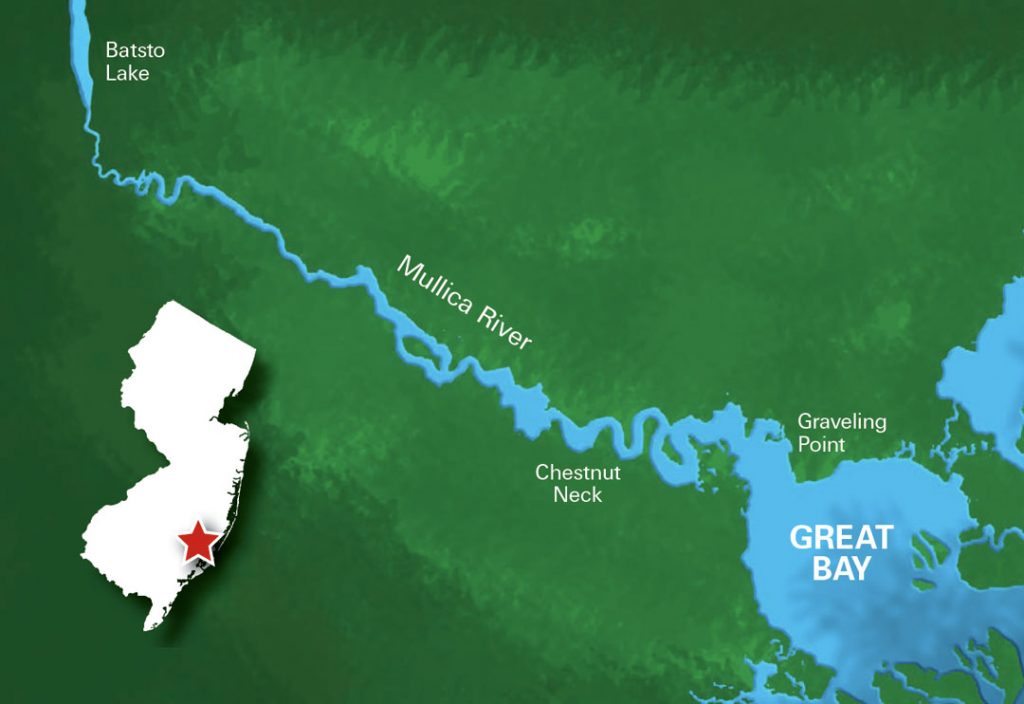 As John and I cruised upriver, he pointed out various landmarks and a bald eagle with a small bass in its talons. “Bet you didn’t see that when you were a kid,” he proclaimed. He was right.

I got the feeling John would have felt more comfortable if I had been blindfolded. He was excited to share his expertise with friends but also concerned that I’d bring an armada to his favorite places. He had no reason to worry.

Shortly after the smell of saltwater gave way to the gentle fragrance of the fresh, we set anchor. John set out two balloons with herring fastened on live bait hooks beneath. He also placed two chunks of herring on separate bottom rods. It didn’t take long for one of the live herring to flee wildly as a bass chased it all over the surface … boils, eruptions, and finally an inhalation!

After a short battle, as we were netting the 20-pound fish, a bottom chunk got walloped. It was my turn on the stick, and I held on as the striper used the river current to its advantage. After three runs and some rolling around, we landed another bass that was slightly larger. Both were quickly released.

We caught about 15 stripers over a period of three hours. When the falling tide slacked, we puttered back to the ramp, fully satisfied with our outing.

Much has changed since that trip in 2007. Anglers aren’t allowed to use herring for bait, and the striped bass population has declined. My friend John, who has relocated to Florida, gave me permission to include this intro to my story, but he couldn’t fully let go of his clandestine ways, adding that he didn’t want me to use his last name. Old habits die hard, I suppose.

The Mullica River is 50.6 miles long, slicing through the South Jersey Pinelands and ending at Great Bay. About 20 miles of the river is navigable by standard-sized recreational vessels before giving way to a narrow, shallow, timber-laden passage that small skiffs, kayakers and canoers find to their liking. Once known as the Little Egg Harbor River, the Mullica is fed by numerous rivers and streams such as the Batsto, Bass, and Wading rivers. Much of what makes the Mullica unique is its relatively untouched state due to strict wetlands and Pinelands laws that protect the river’s watershed and surrounding confines from overdevelopment.

The river also has a place in Revolutionary War history. Patriots from the settlement at Chesnutt Neck regularly raided and destroyed British merchant ships, taking goods and materials up the Mullica to settlements at the Forks and Batsto. The British considered the raiders to be full-blown pirates, and when their losses at sea stacked up, they attacked the patriots at Chestnut Neck. The British enforced their will and forced the brave patriots to withdraw and relocate at different and new positions along the river. There are remnants from the battles and shipwrecks covered in mud, detritus and silt still in the river today. Occasionally, a new wreck is found with side-scanning sonar and historians buzz with excitement as they try to determine what vessel it may be.

In modern times, the historical significance isn’t pondered as often as recreation. Hikers and campers love to explore the forest bordering the river while pleasure boaters enjoy each stretch of water. Not to be left out are the fishermen.

The Mullica is a lesser-known spawning ground for striped bass. A body of migratory fish invade the river to procreate from late March through May.

Many anglers know the perennial early-season hotspot, Graveling Point. Due to its location close to the river mouth and its easy access, it provides anglers an early shot at stripers as they swim upstream. Both by land or boat, it’s terrific for dunking clams or bloodworms.

As April progresses, striped bass stride upriver. They pass popular fishing spots such as the Parkway Bridge, Collins Cove, Log Bay, Hog Island, the Greenbank Bridge, the Lower Bank Bridge, and Crowley’s Landing on their way to freshwater, where they will spawn.

The bass chase river herring on their way to the spawning grounds, fattening up along the journey. Before the possession of herring was prohibited in New Jersey, live-lining one under a float was fantastic fun as bass blew up on the petrified herring. Any remaining herring are still harried by stripers as they also move up the Mullica to spawn in the spring.

When the bass arrive in freshwater near the town of Sweetwater, spawning takes place and bass can be seen thrashing on the surface. First-time observers sometimes confuse the activity for a blitz.

The stripers won’t bite while spawning, but they will eat in the hours before and after. Bloodworms, minnows, and eels take fish in the salty, brackish and fresh sections. Surface and subsurface plugs worked along the edges of the channels, where the water level ranges from a few feet to ten feet, also produce. Soft-plastic worm and fish imitations retrieved back to the boat or bank are sure to score. Due to the timber lining the river bottom in many places, fishermen must be careful not to work their lures too deep.

Some captains troll small plugs or plastics. In the deeper sections closer to Chestnut Neck, a few captains pull Mann’s Stretch 25 deep-diving plugs. Even those without motors troll.

Eighth-grader Mathew Winterbottom lives on the river and tells me of a fisherman who rows an old boat with two rods out the side. And he catches!

Fish range from 10 inches to 35 inches on average, but lunker stripers—the ones discussed in pounds, not inches—are caught every year. These are fish that top 30 pounds or more. Some are reported to tackle shops, and others are mentioned on social media, but a large percentage are captured quietly without fanfare.

Mullica River anglers are proud of their discipline in keeping their catches off the radar. Overall, there is less chest beating in this neck of the woods than along other, more crowded parts of the striper coast. It would not surprise me if dialed-in local anglers catch bass over 40 pounds from time to time and don’t tell a soul. From a river the size of the Mullica, this is quite the feat.

The Mullica River is also a nursery for the local striped bass population. Young-of- -year stripers, along with slightly older fish, never leave the river environment. Even during the coldest of winters, white perch anglers catch and release dozens of tiny bass per outing. Because they can suck perch hooks in, it’s important for anglers to carry de-hookers. These fish are feisty, but still need care when releasing. Sometimes, the numbers of tiny bass are staggering (which is encouraging when considering the health of the Mullica bass stock). When these little guys get older, many will join the ocean migration while some fish stay behind as “residents.” The ones that join the north/south, oceanic journey will someday return to their natal Mullica spawning site to add to the bass population.

White perch are heavily sought after on the Mullica River, maybe even more so than striped bass. They come in all sizes and span most of the river. Local tackle shops like Absecon Bay Sportsman and Chestnut Neck Boat Yard’s tackle shop celebrate their presence, even holding tournaments for them. And though they bite all year, they are most heavily targeted during the winter and spring months when few other inshore species are available.

Anglers can find perch in just about any stretch of river, but the goal is to find them bunched up. When this happens, fishing can be feverishly good. Look for concentrations of perch near drop-offs, creek mouths, deep holes, and even channels. Anglers on foot usually pitch their baits from the banks or friends’ docks in effort to catch perch while boaters drop anchor. Baits are presented on top-and-bottom rigs with small hooks adorned with bits of bloodworm, tiny minnows, or grass shrimp. Anglers must do a little trial and error to find which bait works best at various times of the year. Sabiki rigs are also used for white perch and can sometimes yield a pile at one time.

In the spring, fishermen find success throwing artificial lures for perch. Beetle spins and Johnson spoons are irresistible if pitched in range of a fat perch. Berkley Gulp earthworm is also an excellent producer.

The Mullica white perch will bite on any tide, but it’s important to fish the right kind of water at the appropriate tide stage. Deeper ditches congregate perch on lower tides, while castable flats see an influx of fish when the tide is close to high. Likewise, the deep side of a drop-off is more likely to produce than the shallow side since the fish retreat on ebbing water.

Like stripers, white perch swim to freshwater to spawn in the spring. Following that, they may stay in fresh or brackish water for the duration of the year, or even head out to saltwater. Mullica River perch have a darker hue near their dorsal region compared to the pinkish look they get when spreading out in some of the back-bay creeks or marinas nearby.

White perch are excellent table fare, and since they average less than 10 inches in length, it takes a handful or more to put together dinner. A white perch over a pound is considered hefty, and the Mullica holds plenty. 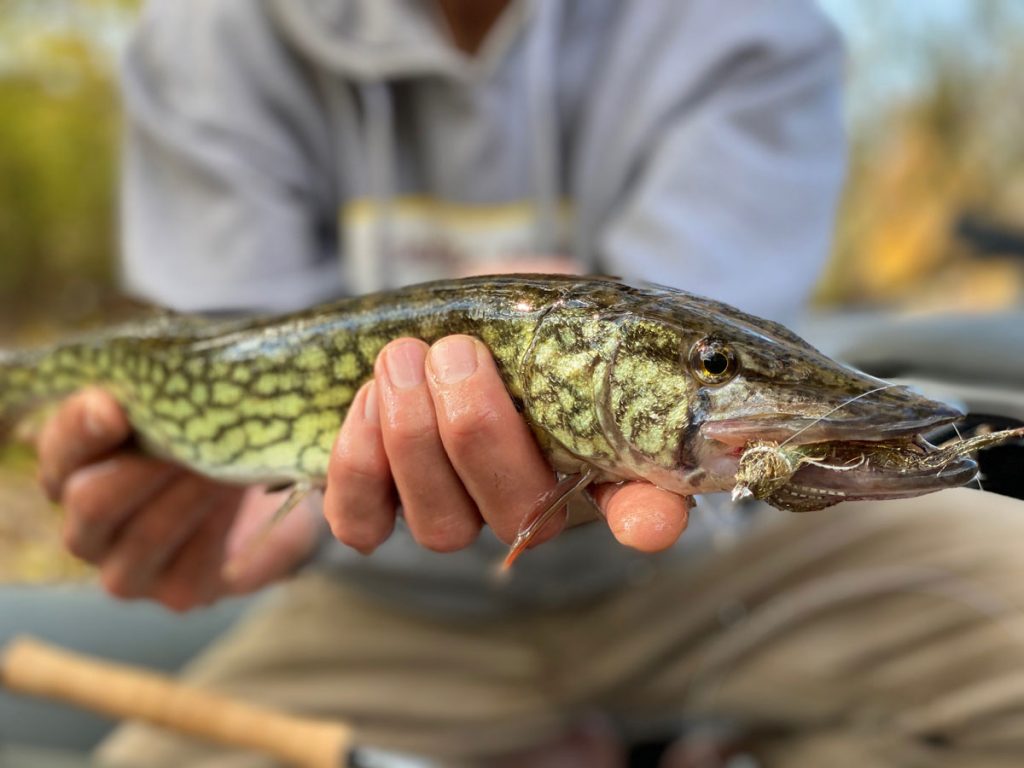 Once at the freshwater reaches of the river, in the vicinity of the “Forks,” chain pickerel enter the conversation. Mullica River pickerel stage at current breaks and indentations along the shoreline. They suspend like the barracuda, waiting for something foolish enough to enter their path. Minnows under bobbers are a lock. Nightcrawlers occasionally catch fish, but soft plastics and spoons are the most popular presentations.

The Mullica isn’t loaded with largemouth bass, but they are available in the river. They spend their time behind fallen trees, offshoot pools, lazy streams, and behind boat docks. Even more than pickerel, they stay out of the fast flow to conserve energy and ambush unwary forage. Crankbaits, soft plastics, and nightcrawlers will hammer Mullica bucketmouths.