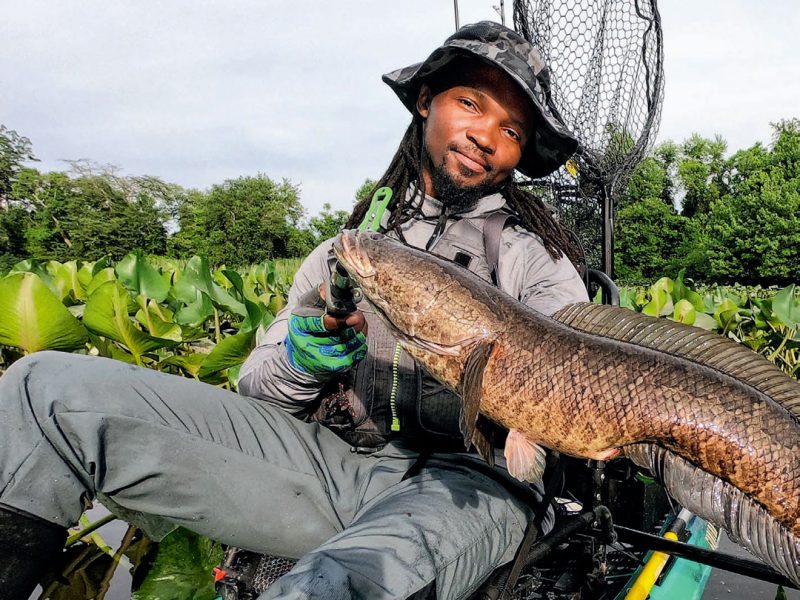 Neaven Reevey is part of a growing number of anglers embracing the northern snakehead and the challenge of hooking and landing this hard-fighting species. Reevey uses topwater frogs to elicit savage strikes from snakeheads.

Invasive. The term, by definition, conjures negativity any way you comprehend it, and is a fisheries biologist’s worst nightmare. I prefer to view it as an opportunity, particularly when it comes to rip-snorting fishing experiences with new species—a “go forth and prosper” attitude.

Meet the flathead catfish and the northern snakehead, the former a bruiser with roots in the southern and midwestern states, the latter a torpedo-shaped slash-and-grab import from Asia. Efforts to slow their spread have been futile. They are here to stay and certainly add diversity to the Garden State’s freshwater fishing roster.

Two distinctly different scenarios are playing out (and will continue to do so) in the Delaware River and an increasing number of its tributaries. Not to be excluded is the Raritan River and its primary tributaries, the Millstone River and Delaware & Raritan Canal.

As with any invasive situation, concerns about the impact on established species such as largemouth bass (itself invasive, technically speaking) and the food chain are foremost. As of this writing, the jury is still out as to the snakehead’s detriment to bass populations. Does the invader eat fingerling and advanced fingerling bass? No doubt. Do bass eat fingerling and advanced fingerling snakeheads. No doubt. That’s greatly simplified, of course, but earlier fears about catastrophic crashes to bass populations beset by these raiders have not been realized. Not yet, at least.

When it comes to the flathead catfish, which is an eating machine if there ever was one, the fear was that it would push out the channel cat and the white cat from their respective habitats. It’s a given that a big flat will take over a hole, meaning that its smaller kin have to move to less threatening areas. That’s adaptation in real-time. So far, I’ve caught channels and whites in venues where flatheads have been documented, more than a few in double-digit weights.

Northern snakeheads were first caught in Stewart Lake on Woodbury Creek in the spring of 2008. Why the fish were released is anyone’s guess, but they found their way into the Schuylkill River. From there, they made it into the Delaware River and then into its tributaries. No lake with a fish ladder was safe from the invasion, and populations were soon established in Newton Lake, Cooper River Park Lake, and Stewart Lake, to name a few.

Responding to angler concerns, the Bureau amped up its electro-fishing surveys through 2009 and 2010, and it was obvious that the northern snakehead was on the move at an accelerated pace.

Says principal fisheries biologist Chris Smith, “The northern snakehead is established not only in the Delaware River tributaries in the tidal sections of lower and mid-section of the state, but far up the Delaware itself. We’ve had reports of them being caught in Sussex County up at the New York/Pennsylvania border.”

He continued, “There really is no way to estimate the population because it includes hundreds of miles of water when you include the tributaries it inhabits. It’s a prolific spawner, capable of spawning multiple times a year, it grows quickly and can survive in a variety of habitats, from tidal creeks to rivers to lakes.”

Angler interest in the northern snakehead’s potential began increasing in 2013 and 2014, and was a full-blown fever by 2015.

The hyper-aggressive snakehead is built for speed and lightning strikes. It provides heart-pounding hits on surface lures like weedless frogs, poppers, buzzbaits, prop baits, and walk-the-dog plugs. It’s cover-oriented and hangs out under lily pads, alongside downed trees, under overhanging brush, and alongside thick mats of weeds.

Use care handling one of these fish because it has the dentition of a tyrannosaur and knows how to use it on a carelessly placed digit.

How big do northern snakeheads in New Jersey get? Fish in the 5- to 7-pound range don’t raise eyebrows, with 8- to 10-pound fish not uncommon. Capt. Dom Troisi from Full Draw Bowfishing, who also offers hook and line snakehead safaris, has seen fish that would easily close in on the 15-pound mark.

Flathead catfish started showing with regularity during 2009 and 2010, with some being caught in Raccoon Creek and Rancocas Creek, both tributaries of the Delaware River. They were then found in other feeders, including the lower Crosswicks Creek and then increasingly in the Delaware proper, in particular around deeper holes near bridges up through Phillipsburg in Warren County. As with the snakehead, it made its way from the Schuylkill to the Delaware, and then into the D&R Canal, Raritan River, and Millstone River.

While not experiencing the meteoric rise in popularity of the northern snakehead, the flathead has a coterie of devotees that is slowly but surely growing.

“Size matters,” opined Troisi, adding “The flatheads we’re hooking, and sometimes landing, are in the thirty- to fifty-plus pound range. Guys who are used to catching channel cats are blown away by the brute force and power of flatheads. It’s a live-bait game, and we use six- to ten-inch suckers, trout, and chubs, and the biggest sunfish we can find, and get them down to where the flatheads are. Hook one, and you’re in for the fight like you never experienced in freshwater.”

Live trout are especially savored by these bottom-dwelling behemoths, and can be purchased from the Musky Hatchery in Asbury or Skip’s Outdoors in Stockton. If the baits are below the 9-inch state minimum, be sure you have the receipt on you. Easily identified by its protruding lower jaw and white lobe on its upper tailfin, the flathead is boss wherever it takes up residence. It inhales anything it can fit in its cavernous maw and grows rapidly.

Notes Smith, “Flatheads are throughout the Delaware and Raritan river systems. They’re spawning and increasing their range. Like the northern snakehead, they’re here to stay.”

Currently, New Jersey does not have state record categories for northern snakehead and flathead catfish, as do Maryland (both), Delaware (snakehead) and Pennsylvania (flathead).

“We don’t want to encourage fisherman to catch these and stock them in other waters,” explained bureau chief Lisa Barno. To say that we were at odds on this was an understatement. What better way to make dents in an invasive population than encouraging fishing and killing them? Besides, who would be irresponsible enough to bucket-stock an invasive when there are enough out there already?

Chris Smith opened my eyes on that one. “On the Nanticoke River in Delaware, a northern snakehead was sampled and found to be genetically linked to the snakehead population in the Delaware River. Logistics considered, that particular fish was most likely stocked and there are probably more in there.” While I still believe that record categories should be established, I get chief Barno’s point.

Says Smith, “Our invasive policy is to educate the public not to spread these fish from water to water, and to kill them when they are caught.”

Yeah, let those invasives be pervasive.

The white-meat snakehead makes for some pretty good eats, predicated, of course, on the water quality where it was caught. I’ve found that ‘heads caught from flowing swims taste better than those from still waters. However, I make it a practice to give the fillets a soak in cold, salted water an hour before it hits the pan.

Dash or two of black pepper

Put crackers into a zip-close bag and crush to a medium-fine texture.

Dip fillet chunks in egg coating, then in the cracker-crumb mixture. Press both sides firmly to make sure crumbs stick. Sauté each side 2 to 3 minutes until coating is crispy.

Place on paper towels briefly to drain. Serve on a bed of baby spinach with some lemon wedges and cherry tomatoes for garnish and either tartar sauce or a horseradish cocktail sauce (I prefer Kelchner’s for both) for dipping.

Accompany with macaroni or potato salad, and an ice-cold mug o’ suds.

For the Snake Bites sandwich experience, place fillet in a fresh ciabatta roll (slightly toasted is a good touch) on fresh lettuce, a hefty slice of tomato, and a few rings of sweet red onion. Top with tartar sauce.