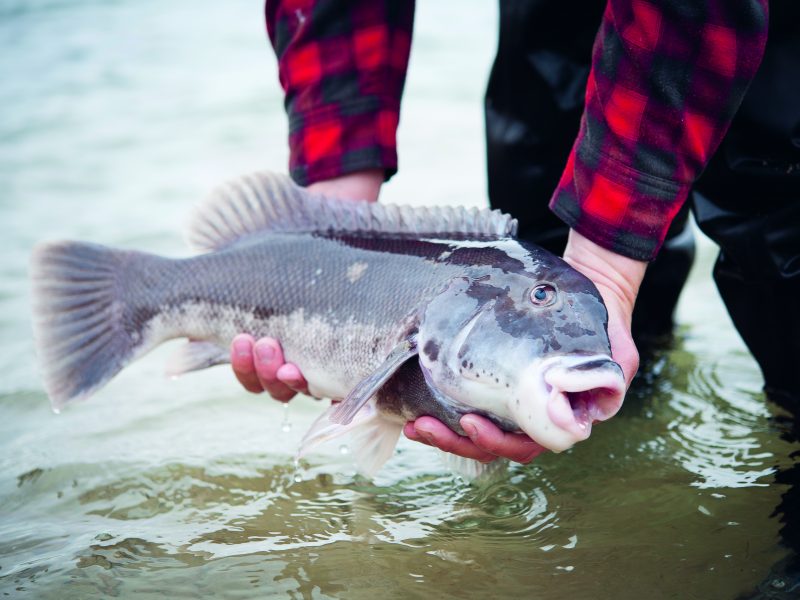 Tautog have become one of the most popular species in the Northeast. Although they have had a cult-like following for decades, their recent rise to fame can most likely be attributed to a couple of angling breakthroughs. Those include tog jigs, which allow anglers to better present crab baits while using lighter tackle and less hardware, and saltwater trolling motors that make anchoring over a structure as easy as pushing a button.

These, along with braided line and lighter, more sensitive rods, have made hooking and landing a tautog much more accessible and fun than it was even a decade ago. And, did I mention that they taste delicious?

The hookset is the most addicting aspect of tautog fishing because you will miss many more than you hook. But when setting the hook on a big one, you’ll know right away as the fish digs for the security of structure, testing your drag and your knots.

As migratory fish, blackfish follow similar patterns to summer flounder, with inshore-to-offshore rather than north-to-south migrations. The difference is that tog don’t travel quite as far and they are found only on hard structure such as rocks, wrecks, and reefs, which provide them with shelter and feeding opportunities. The tautog’s diet consists of crustaceans, bivalves, and even marine sponges.

In the spring, when the sun’s angle changes and the ocean begins to warm, New Jersey tautog start to slowly increase their feeding and move inshore from wrecks and structures in 85 to 120 feet of water, where they spent the winter. At the beginning of New Jersey’s one-month spring tog season, which begins on April 1, the fish hang out on deeper structures, but as the month progresses, they move to shallower inshore wrecks and inlets. Before the season closes, an angler fishing from a jetty will have a shot at catching a keeper from shore.

Spring tautog often prefer softer-bodied baits over hard-shelled crabs. Fresh clams, and even shrimp, are great baits this time of year since they offer easily digestible sources of nutrition.

Anglers working jetty walls, rocks, and crevices should enjoy relatively active tog fishing. Boat anglers targeting some of the same areas will also find feeding fish. As the water warms, dietary changes begin to reflect their increased activity, which is when green crabs are the best bait, especially if tipped on tog jigs.

New Jersey tautog fishing is closed in New Jersey from May 1 to July 31 to give the fish a break as they spawn in inshore waters, bays, and inlets. They continue to feed during this time and are still doing so when the season reopens, with a 1-fish limit, on August 1.

Anglers believe that as the season progresses from summer to fall, tog are conditioned to eating harder-shelled prey such as mussels and various species of crabs. They also feed more aggressively in warmer water, and the activity of its prey also increases, giving the fish even more feeding opportunities.

Invasive crab species, such as green and Asian shore crabs, have become staples in blackfish diets during the better part of the season. These crabs are the preferred baits when looking for tog around backwater bridges, structures, and jetties in the late summer and early fall.

Shore and back-bay fishermen will continue to have shots at keeper tog through the end of the summer and into the fall, but as water temperatures begin dropping in November, the fish begin moving to deeper structures.

Location and Bait: ocean structure and changing up crabs

Around Thanksgiving for most of New Jersey, tog slowly migrate to their offshore structures as the temperatures begin to drop. Fall tautog fishing gets better at deeper depths as the season progresses and water temperatures drop. White-legger (Jonah crab), Atlantic rock crabs, and hermit crabs are the main species on these offshore wrecks and are prime baits for fishermen seeking big blackfish. The same tog that were feeding on green crabs earlier in the season closer to shore become connoisseurs of these other crabs. This is the main reason anglers fishing white-leggers generally out-catch green crab fishermen later in the season.

From Christmas almost until the season closes at the end of February, fishermen can catch tautog at deeper structures off New Jersey. Winter tautog will inhabit wrecks in the 85- to 120-foot range, but their feeding activity slows with the cooler water temperatures and their metabolisms are at the lowest point of the season. Jonah crabs and hermits will still tempt keepers during this last part of the season, but with crab availability low or sometimes non-existent, anglers can also try soft baits such as clams or shrimp. If the current allows, a tog jig may provide an edge over a rig for presenting the crab to lethargic and wary trophy tog.

One of the quickest and simplest setups for tog is a single-hook Belmar rig. A snelled Virginia-style hook is looped around the double surgeon’s loop that holds the sinker, then an overhand knot is tied around the hook leader to lock it into place. Make sure the hook does not extend past the length of the sinker since this may cause you to miss the bite. 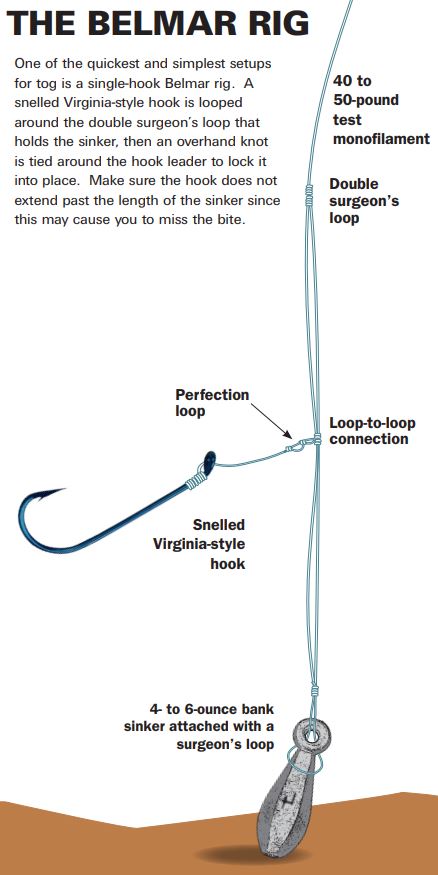 Should I move to another tautog fishing spot?

In all types of fishing, but especially when targeting tautog, making decisions can be the difference between fish in the box or takeout for dinner. As the water gets colder, finding tautog and then building a bite is extremely important. If you drop down and get hits but they are small fish, stay in the area. As a general rule, it is always best to stay where’s there even slight activity, especially during the colder months. As more crab baits are continually dropped down, additional scent is diffused into the area and feeding should ramp up, often drawing the interest of larger fish. Seasoned tog anglers understand that keeper-sized fish push out smaller fish, so there is no reason to move. On the flip side, if activity is completely dead and shows no signs of improvement, it’s definitely worth searching out areas with more life.

Is it a good idea to release the large tautog?

Tog are very slow-growing fish. According to the latest scientific research, a 15-inch tautog, the minimum size in New Jersey, is 7 to 8 years old. Double-digit fish are 20 years old or more. As more fishermen get into tog fishing, it’s been encouraging to see many choosing to release larger fish after a photo, while keeping smaller fish for the table. This will go a long way for the fishery, leaving more trophy-sized fish on New Jersey’s reefs and wrecks, and allowing these larger fish to continue to spawn.

Is tautog fishing good after a storm?

During the fall and early winter months, most of our coastal areas are susceptible to storms and changing seas. Tog are very reactive to increased currents, water clarity, and other bottom disturbances caused by rough seas, winds, and tidal cycles. Anglers who enjoyed drop-and-reel fishing in the early fall will have to essentially wait out the bite after a storm since tog are slower to find baits in dirty water. During these disturbed bottom periods, tog rely more on their sense of smell as compared to vision, meaning good fishing generally takes more time. When possible, wait a few days after a storm for the water clarity to improve before making a tog trip.

Article: Tautog Tips from the Pros