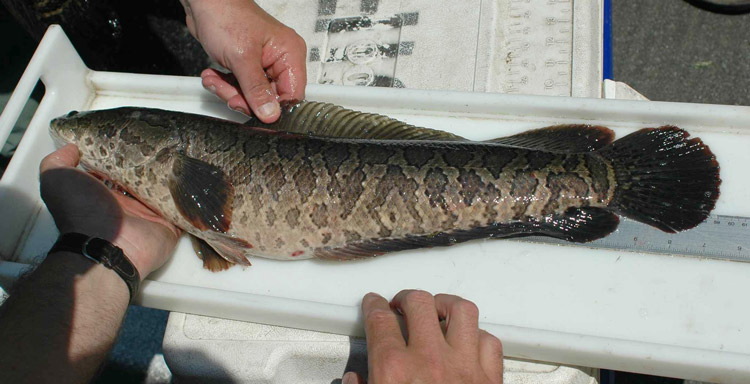 It’s one of those situations where the uninvited guest proves the most entertaining when the party-hearty host is on the fade.

Such is the case with the northern snakehead and the August meltdown of largemouth activity in the tributaries of the Delaware River in the New Jersey area stretching from Little Mantua Creek in Gloucester northward into the Crosswicks Creek in Burlington County.

If it hasn’t already, it is very likely that this voracious invader will soon infiltrate the languid 30-mile Delaware-and-Raritan Canal in Trenton (Mercer County). From there, it may enter the Raritan River proper during a catastrophic rain event (like the one that created Tilcon Lake in Warren County) and subsequent overland flooding.

For almost a decade, the presence of the Northern snakehead has been causing anxiety among fisheries managers, bass fishing enthusiasts, bass fishing clubs, and panfish—even more so than its fellow alien, the flathead catfish. Why? Because it’s an extremely prolific late-spring spawner, it’s an indiscriminant first-level predator, it can breathe air and survive out of water for several hours, and it has the tolerance to thrive in a variety of environments, even those that might also be called toxic waste ditches.

As per the “official” record, the snakehead’s origin in this area (it was already established in several tidal waters in Maryland and Virginia) was a lake in Philadelphia’s FDR Park. Whether the fish were released because they had become too large for a home aquarium or were freed to establish a source of food for a select residential population is moot. They soon found their way into the Schuylkill, and from there it was only a few flicks of their wide, slightly indented tails before they were in the Delaware River. The Big D’s tributaries beckoned, and anglers fishing these waters are now living with the results.

“There’s no doubt the northern snakehead is here to stay, and attempts at eradication would be futile,” says NJ Division of Fish & Wildlife principal fisheries biologist Chris Smith, himself a bass circuit competitor who has caught snakeheads during tournaments on the Potomac. He continues, “Trying to get estimates on how many are out there is impossible because, counting the tributaries, it now inhabits several hundred miles of water. The degree of the negative impact it will have on bass, panfish and forage populations in the respective ecosystems won’t be known for years.”

As far as largemouths are concerned, it should be recognized that they will feed on snakehead fry and fingerlings just as the snakeheads do with them. However, once a snakehead reaches, say, eight inches, it’s going to take a big bass to choke one down. Conversely, an eight-inch bass is a Happy Meal to a two-pound ‘head.

Declared fisha non grata by the Division, it’s an immediate death sentence for any snakehead that’s caught. Thrashed, bashed or otherwise trashed, any snakehead is to be killed immediately and disposed of. The species has a Rasputin-like tenacity for life, and the most certain form of death is beheading, plain and simple. The fish can be retained for consumption, but it must first be killed. Possession of a live snakehead (on a stringer, in a bucket or livewell, or squirming around on dry ground – remember, it can breathe air) is illegal.

The good news: the snakehead offers rip-your-face-off fishing, especially during the August heat. It is very cover-oriented and will hang under beds of lily pads and floating weeds, alongside laydowns, under overhanging brush, along the outer edges of cattails, and along (and sometimes within) thick mats of weeds. The snakehead’s profile is built for speed and lightning fast strikes and, with the teeth of a Tyrannosaurus Rex, its clamp is unyielding. There is nothing a snakehead won’t eat. Shiners, sunfish, frogs, fingerling bass, carp and suckers, eels, small turtles, mice, Smart Cars…nothing is safe.

Its extremely aggressive behavior makes the snakehead an ideal target for those who thrill at the sight of a surface strike. Buzzbaits, popping plugs, floating stick and propeller baits worked along edges and through alleys in the vegetation will elicit crunching assaults. The frog is especially relished by snakeheads, and amphibian imitators such as the Booyah Pad Crasher (swamp frog and bullfrog patterns) are pure snake charmers. Behind-the-dorsal-hooked shiners allowed to swim in the alleys of weeds are promised a violent death. Hardware-wise, opt for 40-pound braid tied directly to the eye, upping the tether to 50 or even 65 pounds if the pads are especially thick. If using live bait, hang it to an 18-inch length of 30-pound fluorocarbon leader to ward slice-offs should the shiner be nabbed down deep.

How big are the snakeheads in southern Jersey waters? They range anywhere from 10 inches to 10 pounds, and Smith suggests that they can easily attain weights of 12 pounds or better. Mike Biel from West Wing Outfitters (609-647-6958), who operates an after-dark bowfishing guide service on the Delaware River in Bordentown specializing in giant common and grass carp, says he’s seen some that size on hot August nights.

Despite being hated, loathed and despised, the fact is that the snakehead is, unfortunately, going places, and by that I don’t mean going away. It’s entrenched, and the only recourse is to make the most of the situation. In my view, along with the flathead it should be given a place at the state record table as it has in Maryland. Why not? Ignoring the snakehead’s pres- ence isn’t going to do anything to eradicate it, and if encouraging fishing for it will help put a dent, however slight, in the popula- tion, that’s a plus.

Information about Garden State snakeheads can be obtained by calling Chris Smith at 609-259-6964.