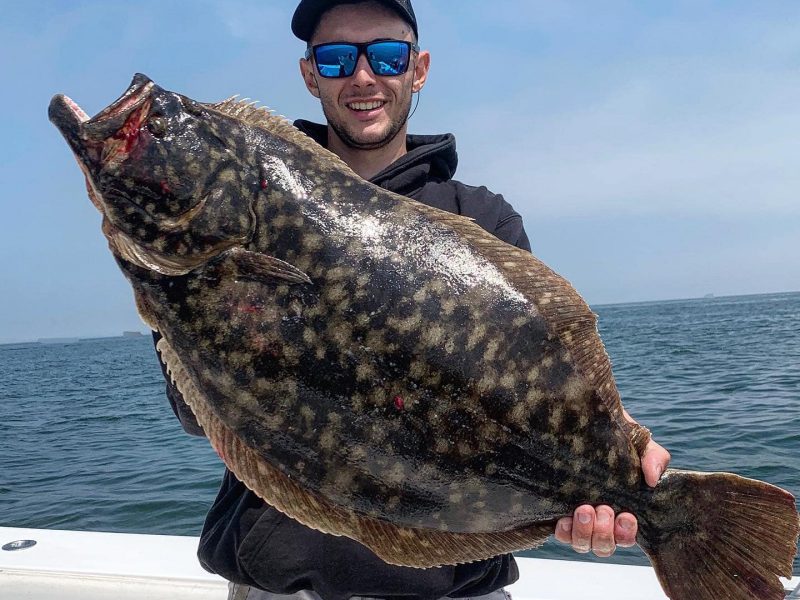 Two crucial questions need to be answered for successful fluke fishing—where are they, and what are they eating?

Summer flounder are migratory, following similar (if not the same) patterns every year. Fluke migrate from east to west in the spring, leaving their wintering grounds at the edge of the continental shelf to arrive in our back bays and inshore waters by April. In midsummer, New Jersey fluke leave the bays, settling around reefs and inshore structures. There, they feed heavily until early fall, when they retreat offshore to spawn through October and November and spend the winter. 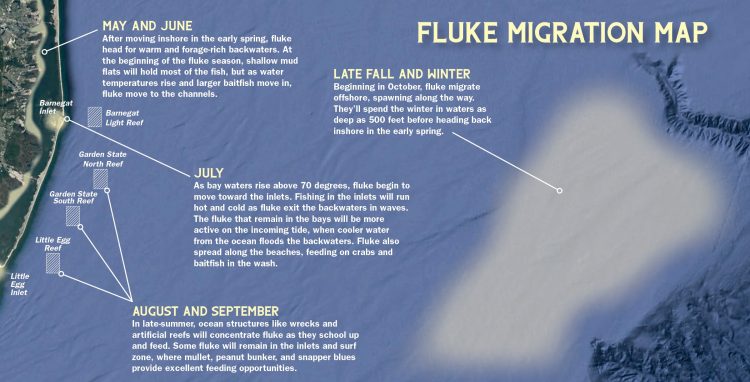 By the time the fluke fishing season begins, they’ve been swimming and feeding in the back bays for several weeks. Some of the flounder stay on inshore reef sites as opposed to coming into the bays, but those numbers are relatively low, according to diver reports.

In the bays, fluke will encounter a plethora of baitfish seeking out the warmer, protected waters. Where fluke hold throughout the bays is directly influenced by which baitfish are most abundant. Grass shrimp and sand shrimp are plentiful in most bays and estuaries in the spring, and fluke will gorge themselves on them in the absence of other baitfish. Fluke seek them out in eel grass flats. With early-season fluke feeding on these small 2- to 3-inch offerings, your baits should be similarly small. This is why light-tackle and ¼- to ¾-ounce jigs or bucktails are so deadly on spring backwater fluke.

In many of New Jersey’s bays, mosquito ditches provide habitat for large schools of mummichogs at high tide. As the tide drains, the exit points from these locations can be fluke fishing when drifting with live minnows.

As the spring progresses to summer, Atlantic spearing in the 4- to 6-inch range inhabit most backwater locations as they spawn, and fluke will begin to change their feeding patterns by moving from the mud and sand flats to dropoffs, channels, and deeper holes. Anglers should begin to use larger baits and focus their efforts on channels, edges, points, and drop-offs. The feeding pattern will be directly influenced by the increased presence of spearing, and flounder staging locations will directly mirror those areas holding baitfish. Larger baits such as the Berkley Gulp 4- to 5-inch Swimming Minnow should begin to work better. Most of the action occurring from May to late July is in water from 2 to 10 feet since fluke position themselves at good ambush locations throughout the backwaters.

In the backwaters, the slack period through the first two hours of the ebb current usually has cleaner, warmer water, and this is when the fishing is best. As the ebb current continues, the water still warms, but organic material pulled along with the tides reduces water clarity, which slows down the action. Chartreuse or highly visible lures will outperform others during this part of the daily tide cycle.

Toward the end of July, slowly shortening daylight hours signal a mass exodus of fluke from the backwaters. But before leaving, fluke adjust their feeding habits in the bays once again. The backwaters have warmed to the point of shutting the fluke bite down during the outgoing tides. The fish shift their feeding activity to the flood tide, and the cleaner, cooler ocean temperatures that come with it.

Fluke also move to deeper holes and channels close to the inlets this month as they stage for their ocean journey. Since New Jersey fluke leave the backwaters in waves, fishing close to the inlet will run hot and cold due to schools of fish moving through.

August and September are prime fluke fishing months when the inlets, reef sites, inshore wrecks, and deep-water wrecks start to fire on all cylinders. The diets of migrating fluke shift from spearing encountered in the back to peanut bunker. These 4- to 5-inch juvenile menhaden will start flushing out of our bays into the inlets, along with 6- to 8-inch snapper blues. Using larger baits and lures will help target keeper-sized fish. Don’t be afraid of using bigger baits at this point in the season.

Fluke hanging out at the reefs, wrecks, and other ocean structures focus on larger forage like sand lances, squid, juvenile sea bass, and crabs. Large curly-tails, like the Berkley Gulp 6-inch Grubs, tipped on 3- to 6-ounce bucktails or jigheads become 7- to 9-inch baits, and doormat fluke love them.

As summer turns to fall, fluke in New Jersey will continue to move farther offshore in preparation for the spawn. The larvae will be swept back inshore by winter currents, eventually reaching our estuaries, where the cycle begins again.