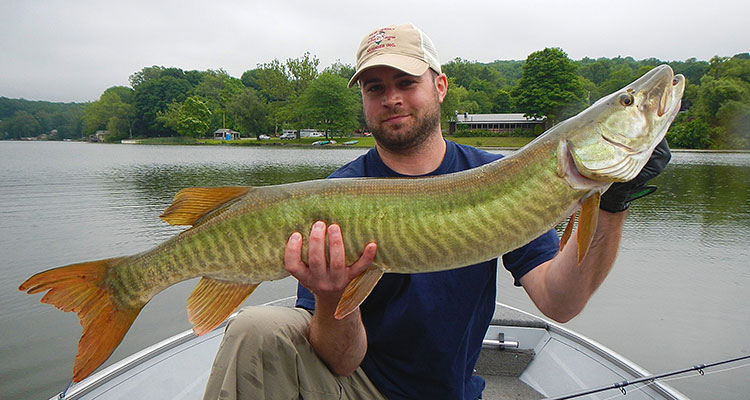 The first time I caught more than one muskie in a single day of fishing changed much of what I thought I knew about muskie fishing. It was early spring, and my friend Brian and I were going about the routine that had been engrained in our minds during our first few years targeting these elusive fish. As we worked the typical breaks and edges in the warming water, we succeeded in moving only one fish.

Normally, we’d have shrugged and said, “That’s muskie fishing,” but on this day we decided to try something different. Instead of going through our milk run again, we opted to fish some shallower water on a large flat with emerging weeds. Over the next two hours, we hooked four muskies, landing three of them. We also had a few more follows that didn’t commit. All of the fish came from 5 feet of water, far from any drop-off or weed edge.

I hear over and over again that “muskies are creatures of the edge.” While there is a great deal of truth to that, if you limit your muskie hunt to weed edges and breaklines, you’re missing fish. This can hold true right until ice-up, but fishing the shallow flats is essential in the early spring.

Muskies are not native to New Jersey. Their populations in the Garden State are sustained by hatcheries, and there is very little, if any, natural reproduction. The reason, I’m told, is the bottom substrate in our lakes. In their native range, muskies spawn over sand or pebble bottoms. New Jersey’s lakes have soft bottoms where the muskies eggs are covered over with sediment and smothered.

The muskies are unaware of that little piece of information, however, and try like heck to reproduce. This means that good numbers of spawning fish will move into shallow water when the water temperature approaches 50 degrees. In addition to attracting muskies to spawn, the warmer water temperatures of the shallows draws baitfish from deeper water, attracting muskies to feed as well.

The north end of a lake will warm quickly in the spring because it receives more sunlight and is protected from cold north winds. That said, I do not ignore the other end of the lake; in fact, my most productive flats for spring muskies are located on the southern ends of two different lakes. Any shallow flat with a dark bottom will absorb sunlight and has the potential to attract spawning and feeding fish. Watching the temperature gauge on your depthfinder will help you find the warmest spots.

Weed growth is another element to pay attention to while scouting your spring muskies. Although the shallow flats may become too overgrown to pull lures through by June and July, they will be in prime condition in April and May. Emerging weeds on the flats are another fish-holding element, so look for areas that have some salad.

Once you’ve identified possible spawning locations, pay attention to your temperature gauge. When water temperatures are still in the 40s, muskies will be staging in 10 to 15 feet of water near the spawning grounds. Once temperatures push into the 50s, focus your efforts on the 5- to 10-foot flats. Flats hold muskies until the water dips below the 50-degree mark in the fall. These areas may become choked with weeds in the summer, but if they are fishable, you may find muskies there.

Don’t hesitate to throw a bait into 2 feet of water, especially on bright, sunny days that can warm the extreme shallows. Stealth is key in such shallow water to prevent spooking the fish, so try using baits with smaller profiles that don’t make a huge splash, and make sure the muskies don’t see you first.

The Right Tool for the Job

Picking the right bait for early season muskies in shallow water is about finding the bait that will most effectively cover water. With the focus on 5 to 10 feet of water, use baits that can be worked over and through the emerging weeds.

Small bucktails, small crankbaits, muskie-sized spinnerbaits and muskie jigs make up my entire arsenal for early-season muskies on the flats. Smaller bucktails like the Musky Mayhem Double Showgirl have no trouble staying above the emerging weeds, and like any other time of year, muskies just can’t seem to resist a bucktail. If the weeds are thick and the treble of the Showgirl is hanging up, try switching to a Lindy M & G Spin. This muskie-sized spinnerbait is a tried-and-true fish-catcher, and an early season favorite. With either the spinnerbait or the bucktail, a steady retrieve will get the job done, and holding your rod high will help keep it above the weeds.

Crankbaits will also allow you to target skinnier water. Most muskie crankbaits float at rest, so twitching them will allow you to fish just below the surface. A slow, steady retrieve will make a crankbait dive a couple of feet, depending on the speed of your retrieve, the size of the lip on the crankbait and the angle of your rod tip. The packaging on almost all muskie cranks will tell you how deep they run, so try picking ones that dive between 0 and 5 feet. The Joe Bucher Outdoors Shallow Raider is a good lure to start with.

Muskie jigs also produce fish and are sometimes the only option for fishing the extreme shallows. J-Mac makes a great muskie/pike jig that costs only a few bucks. Attach a Lunker City Salt Shaker to the hook and you have a deadly muskie combo that can make it through super-shallow water and the thickest slop. Swim the jig through the weeds, occasionally letting it fall, and make sure you’ve reeled up the slack before setting the hook.


A good net is the most important piece of equipment the muskie fisherman owns. Nets that are too small or are made of cheap, thin plastic mesh can do considerable damage to a muskie’s slime coat, skin and fins. An oversized net acts as a pen and enables you to keep the fish in the water while you unhook it. Most of the muskie nets on the market today are also made with a coating on the mesh that protects the fish while it’s in the net.

A caught muskie often has the hook buried in such a way that it pins the fish’s mouth shut. In these cases, it’s best to quickly snip the hook with a pair of miniature bolt cutters, like those from Knipex. This is easier on the fish and improves its chances for survival.

So if you’re looking to improve your muskie game—or catch your first one—make sure you’re spending plenty of time to fishing the flats. You will always be able to find muskies on breaks, weedlines and in open water, but shallow water muskies can be easier to locate and are often the most willing to bite, and at no time is this more true than in the early springtime.