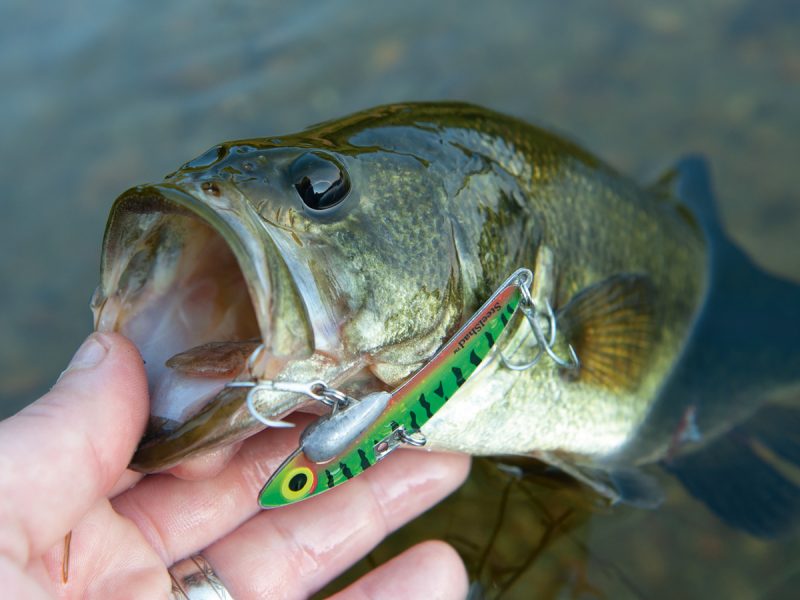 It was a crisp October morning. I nudged the boat toward a waypoint, steering it into the light breeze. Sitting over 30 feet of water, I cast a spoon up onto a slow-tapering, deep flat. The lure fluttered to bottom and I began a snap-jigging retrieve, feeling its pulsing vibrations through the rod handle. I continued jigging, but was interrupted by a solid strike.

Sweeping the 7-foot medium spinning rod to set the hook, I immediately found myself playing catch-up, reeling in 15-pound braid to maintain tension as the fish skyrocketed to the surface and executed a textbook smallmouth bass maneuver. The bronzeback broke water, then turned and began digging downward. The 3-pounder pulled hard, but it was soon glistening in the bright autumn sunlight within the landing net. The catch marked the beginning of a great day of fishing, a day when jigging spoons and blade baits again proved their prowess for catching bass from cold water.

Jigging spoons and blade baits catch largemouth and smallmouth bass year-round but are particularly potent during cold-water periods. In recent years, several new metal baits have arrived on the market, a sign of their effectiveness for catching bass, along with other fish species.

The term “spoon” represents a broad range of baits. When bass fishing in northern lakes, it is hard to go wrong using a 2- to 4-inch spoon. Spoons can be categorized many ways. Here, we’ll lump them into either straight or bent models since this trait influences their action and fall rate, among other things.
The ACME Kastmaster, Bass Pro Shops XPS Tungsten jigging spoon, Bass’n Bait Company Rattle Snakie, Hopkins Shorty, Luhr Jensen Cast Champ, and Northland Buck-Shot Rattle Spoon are straight spoons. They sink quickly and have conservative fluttering actions, which makes them well suited for bass with narrow strike windows. They’re equally effective for precision vertical tactics like jigging over an irregular bottom or along a steep ledge.

A bent spoon moves more erratically, and the curvier the bait, the wilder it behaves. As a result, these lures sink more slowly than straight spoons. This action increases their hang time in the water, which is useful for attracting scattered or suspending bass as well as temping bites from hesitant onlookers. The ACME Little Cleo, Blue Fox Moresilda, Custom Jigs & Spins Slender Spoon, Freedom Tackle Minnow Spoon, Luhr Jensen Krocodile, and 4-inch Strike King Sexy Spoon are bent spoons.

A blade bait is another formidable metal lure for autumn. Classics include the Heddon Sonar, Silver Buddy, and Reef Runner Cicada. More “recent” arrivals are the Damiki Vault and Vortex, Lucky Craft ILV 50, Johnson Thinfisher, Steelshad, and the unique Sebile Vibrato. Blades emit lots of vibration and flash on the upstroke, and have much tighter fluttering actions during the fall compared to spoons. And, unlike a spoon’s vertical profile, a blade bait is horizontally oriented. Having each style of lure lets an angler present bass with two distinct profiles, plus differing degrees of flash and vibration frequencies.

Color options abound, though silver and gold patterns are must-haves, and a selection of yellow perch, white, and hot patterns (like clown and fire tiger) are also recommended.

A Word on Weights

It is wise to have spoons and blades in a variety of weights in order to be able to effectively fish varying depths and water conditions. If you’re fishing deep smallmouth in big water like that found on Lake Champlain, or in fast current like in the Connecticut River, heavier spoons and blade baits are essential. Lighter versions can pay off when casting mid-depths, especially in smaller waterbodies. Previously, my selection consisted of 3/8-, 1/2-, and 3/4-ounce baits, but this changed after speaking with two anglers.

Great Lakes guide Simon Frost explained that a 1-ounce jigging spoon helps him fish vertically in depths beyond 30 feet for big-water smallmouth in rough water conditions and high winds. A ¾-ounce version gets the nod when it is calm, though when the lake is nasty, a 1-ounce spoon gives more control and precision, which means catching more giant bronzebacks.

At the other end of the spectrum is something I learned from Wisconsin guide Eric Haataja. He shared how potent a small ¼-ounce blade bait can be in the fall. He isn’t against heavier blades or jigging spoons; in fact, Haataja finds smallmouth often have no qualms chasing down a 1/2-ounce blade bait. However, on days when they’re less interested in chasing and need some coaxing, the slower fall and tighter vibrations of a lighter blade is very effective at turning sniffers into biters. Heeding his advice, I’ve become a fan of this power-finesse approach using 1/4-ounce blades for catching portly bass (along with big panfish and walleye) in autumn on smaller lakes and in calm weather conditions.

Deep, lush vegetation beds and isolated weed clumps are popular feeding stations for largemouth and smallmouth bass in autumn. Casting a jigging spoon or a blade bait may not initially come to mind for fishing greenery, but on one overcast October day years ago I learned how effective these lures can be when fished around the edges of vegetation.

I was using finesse plastics over the top and along the deep edge of a grass bed in 10 to 12 feet of water, hoping to catch largemouth, smallmouth, and black crappie. Eager to try and upsize my crappie catches, I switched to a Custom Jigs & Spins Slender Spoon. I figured its wild, fluttering action and slow sink would be perfect for attracting slabs suspending over the grass tops. It worked; but I also caught a heck of a lot of largemouth using the spoon.

The mechanics of fishing a bent spoon or blade around grass are straightforward. Fan-cast the top of the vegetation or make short pitches along the outside edge. Allow the bait to sink for a couple seconds, but not so far that it sinks into the vegetation or it will surely snag grass. Next, slowly lift the rod to raise the lure, pause to let it flutter down while reeling in slack line, then jig it again. Most hits occur as the bait falls.

Points, humps, bars, flats, and river ledges are open-water areas where spoons are effective. Smallmouth and largemouth may coexist in mid-depths, but expect smallmouth to dominate depths beyond 25 feet.

Long casts with a spoon paired with a steady snap-jigging retrieve are effective at covering water and catching bass. After the lure settles on bottom, snap the rod to pull it upward one to two feet off bottom. As the bait sinks, lower the rod and reel in some line. Each bait has its own unique characteristics that will determine whether its best action is when allowed to fall on either a tight or a semi-slack line. Allow the bait to hit bottom (or stop just shy of the floor) before jigging it again. This rapid-jigging retrieve will trigger reaction strikes from neutral fish while simultaneously appealing to aggressive bass willing to chase.

Varying the retrieve is as simple as adding a few reel turns after the snap, which swims the bait a short distance after its initial scurry off the floor. Another option is using two short rod snaps instead of one steady pull. This results in two distinct hopping motions and a different vibration pattern.

A trick Frost shared for triggering smallmouth in cold water is letting a jigging spoon fall and then settle on bottom after snapping it upward. And, here’s the important part: he dead-sticks the spoon on the floor for several seconds.

“What happens is when bass aren’t really feeding, they see that flash. The bait comes down, and they swim over and pick it up,” Frost said.

While fishing quickly with spoons has its place in autumn, a mid-range pace is also worth trying for spoons as well as blade baits. A moderate, steady lift along with a lazy drop can be better at times for sluggish, neutral bass. And, certain lures produce their best action when fished at a mid-range speed. In fact, Haataja cautions against overworking blade baits on a casting retrieve.

“Of all the techniques I teach, blade-bait fishing takes more time and persistence to have success,” Haataja said, explaining that overworking a blade by pulling it too fast or lifting it too far off bottom is a common mistake he sees clients make.

“It’s all about small rod tip pops,” Haataja said. “Make a short snap and always keep a taut line when the bait sinks. Keep the rod tip in the hook-set position, so when the fish taps the bait you can quickly set the hook.”

Haataja predominantly casts a light blade bait on 6- to 8-pound braid with a 10-pound fluorocarbon leader. He uses a medium-light rod to cushion the fight and keep small hooks on the ¼-ounce blade from pulling out. The soft rod absorbs some of the jigging action, so although we’re talking a 4- to 6-inch snap, the rod’s influence makes the blade’s speed a mid-range pace. (Search Haataja on YouTube to see his blade bait jigging retrieves along with other interesting angling topics.)

Being able to cast a blade bait a country mile also makes it effective for catching suspending smallmouth bass feeding on open-water baitfish like shad and smelt. Here, a blade gives the angler another option beyond suspending jerkbaits, topwaters, spinnerbaits, spy baits, and other lures commonly used in this scenario. The blade can be retrieved directly beneath the surface or counted down to a specific depth. Steadily reel the blade while pumping the rod so it darts forward and then flutters down – hold on tight because smallmouth absolutely crush this presentation. A long-casting spoon can be used in a similar manner.

Vertical jigging a spoon or blade bait is another effective way to catch fall bass. I find this method works better for smallmouth, but if largemouth are deep in your area, be sure to give it a try.

The key to vertical jigging success is good boat control: always position the boat into the wind. Using a bow-mount trolling motor is one strategy, but I also use my big tiller outboard to back-troll into the wind when in my Lund 1775 Pro Guide in rough conditions. Regardless of how you control the boat, the goal is keeping it over the lure so the line is as vertical as possible for maximum control. This is most important when drifting over a snaggy bottom to avoid hang-ups. When fishing less hazardous terrain, one can jig a bait with an angle in the line.

The other advantage of fishing under the boat is that it positions the lure within the fishfinder’s sonar cone and allows its depth and fish reaction to be monitored on the display. This feedback is useful for refining the presentation and making bass bite.

The fall rate is also important and, again, an angler must decide whether to let a lure fall on slack line or on a controlled fall. While not an absolute, I find a controlled fall effective with blades. Spoons are another matter and really can go either way depending on the specific lure and weight used.

When it comes to autumn fishing for largemouth and smallmouth bass, spoons and blade baits are time-honored presentations. Whether cast or vertically jigged, the flash and vibration of these metal lures can trigger strikes from both non-feeding and aggressive bass. This fall, don’t leave the dock without a couple of these lures in your tackle box.