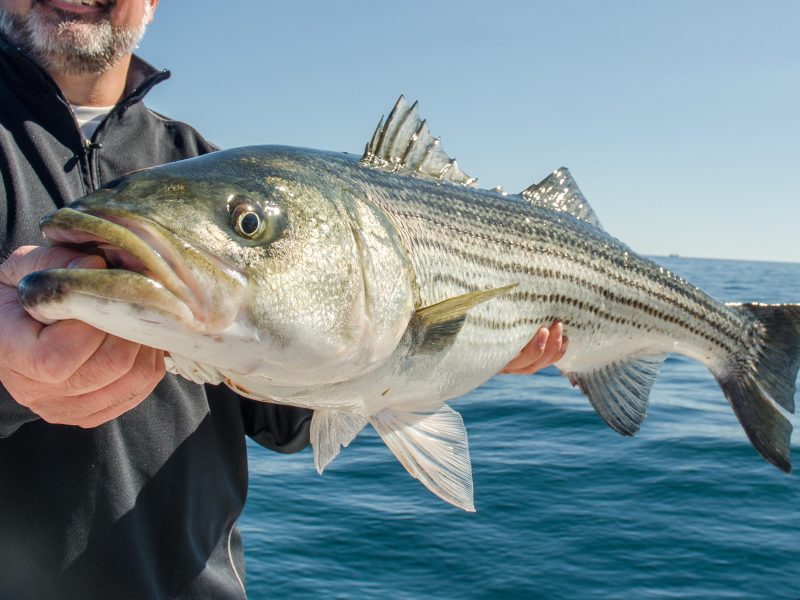 By this time of year, the Massachusetts’ commercial striped bass fishing season is usually in the books. After the late-June opening, the rod-and-reel commercial fleet usually tops off roughly 800,000-pound quota by the end of August. But this year, as of this afternoon, the quota is just over 71% filled.

At the current rate that the quota is filling up, Massachusetts Marine Fisheries projects that commercial fishermen would need to fish into October to catch the full 847,585 pounds of striped bass they have been allocated. And that’s if the notoriously fickle fall weather allows fishermen to get on the water enough to catch those stripers before they leave Massachusetts.

In response to that, on Tuesday, Mass Marine Fisheries opened a public comment period to ask about adjustments to open commercial fishing days for striped bass. The release read as follows:

“Current quota monitoring data demonstrates that just under 250,000 pounds – approximately 30% – of the commercial striped bass quota remains. In recent weeks, daily harvest levels have averaged about 20,000 – 25,000 pounds. If current conditions persist, we do not project closing the fishery until October. Moreover, current weather projections and typical fall weather may constrain fishing activity reducing our ability to utilize the available quota.

The Marine Fisheries Advisory Commission (MFAC) will review DMF’s recommendation and vote on whether or not to authorize the Director to take this action at its September 13, 2018 business meeting. Additional notification will be sent out this Friday – September 14, 2018 – to inform the public of the MFAC’s decision on this matter. If approved, these new fishing days will go into effect for fishing week beginning on September 17, 2018.

DMF will accept public comment on this proposal through 5PM on Tuesday, September 25, 2018. Any comment received will be provided to the MFAC and DMF may recommend further revisions to the 2018 commercial striped bass limits based on these comments.“

If you’ve kept up with the On The Water Fishing Forecasts for Cape Cod and Massachusetts this summer, you know that there have been great numbers of schoolies and small recreational-size keepers (28 inches and larger) around, but larger striped bass have been harder to come by. There were fewer large striped bass around Race Point and the Outer Beaches this spring, a big bass, topwater fishery that has happened like clockwork for the past several years. The large stripers that show up in Cape Cod Bay in the late summer were late arriving and fewer in number. Besides a few big fish blitzes in the Cape Cod Canal, it’s been an alarmingly quiet summer for big striped bass in Massachusetts.

You can share your thoughts with Massachusetts Marine Fisheries at the following email: marine.fish@state.ma.us