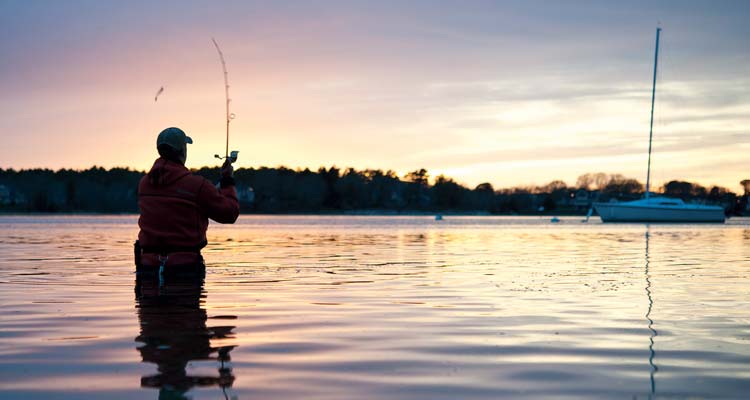 Although it’s true that surfcasters focus primarily on ocean beaches in the fall as they attempt to intercept the mass migration of baitfish and the predators that follow them, there are other opportunities. These ocean runs can be spectacular, and I look forward to the fall run with intense hope. I love the pounding surf, the crisp air, and the promise of catching fish amid acres of churning bait and fish. But, what to do when ocean action is spotty or non-existent? The answer is to look for more reliable action in the harbors.

Access is often either difficult or impossible. Nonetheless, there are fish to be caught there, and when the ocean runs are poor, as they were in 2016, I move north. Harbors are consistently productive because the young of many species are nurtured there. Early on, juvenile baitfish find protection from predators in marsh grasses, bottom seaweeds, rock piles, shallow creeks, and even wrecks, and the food they need is abundant in these eutrophic estuaries. As a result, the young bait grows fast. For most of the summer, these young-of-the-year fish go unnoticed because they are so small, but by the time autumn arrives, most are 3 to 6 inches long, and when the schools are large, they offer a banquet to predators.

The shoals of bait may include peanut bunker, porgies, weakfish, snappers, spearing, and herring. Of course, there are years when none of these species spawn with huge success and then there are years when several species are successful. However, in most years, it’s one bait species that dominates, like in 2015 when the porgy year-class was off the charts, and in 2016 when bunker spawns were very successful.

Sure, these same baits pour out of bays into the ocean through Long Island’s South Shore inlets, but the schools spill into a vast ocean and it’s easy for them to get lost. For example, what if schools of bait are emptying out of Fire Island Inlet, but the mega schools of stripers and blues are still east and north? The result is that the bait can skedaddle west and south on their migration mostly unmolested—at least for a while. The migration works a little differently in Long Island Sound because it is, in reality, a huge estuary. In the Sound, there are always schools of predators lurking nearby in deep water. When the vibrations from tens of thousands of small fish in the harbors ratchet up and their smell begins to leak out into the Sound on outgoing tides, it doesn’t take long for the predators to find the food. Sometimes, it’s as if a switch gets thrown and what was once poor fishing turns into an instant rout.

All Long Island Sound harbors will produce handsomely in years when bait schools are large and numerous; however, each harbor may not produce at the same time. Although not a hard and fast rule, there is a tendency for action to move from west to east through the autumn, presumably because western harbors cool first. Western harbors do abut a narrower and generally shallower Sound that cools more quickly, stimulating the bait to move out of nooks and crannies toward the mouths. On the other hand, to the east where the Sound is deeper and wider, there is more water that takes longer to cool, and thus the bait migration is delayed. Again, also not a hard and fast rule, but action in western harbors such as Little Neck, Manhasset, New Rochelle, and Mamaroneck tend to produce best from late September into mid-October. Action in eastern harbors tends to pick up in mid-October and last into November. It’s impossible to pinpoint the timing of the runs since so much depends on weather patterns and the species of dominant bait. I never count on any run beginning and ending at the same time (or at the same places) year after year because there are no absolutes in fishing.

I don’t count on fishing reports either because they are often days old and may be exaggerated or misleading. However, I do count on my own eyes and ears, trusting them to let me know when things are gearing up. Finding my own fish is not only more satisfying, but also puts me on the action ahead of most folks, which gives me room to work the shorelines without interference—at least for a while.

Unless one is very familiar with a harbor, I suggest fishing in daylight because it’s much safer and because bait schools are easier to spot. Most of the time, the action is quiet and there are seldom flocks of screaming birds to give it away, or even splashing fish for that matter. But where there’s bait, there are fish, especially in the fall. Since I have already figured out where I can legally enter a shoreline and the safe ways to move about, this knowledge allows me to search for bait and fish freely. However, any angler who has not done this homework should make doing so the first order of business; otherwise, you might end up stuck in mud up to your thigh, or worse.

Certainly, there are hard-packed places in the harbors, but there are also holes filled with silt, and debris from storms and the decay of vegetation. I know this because I’ve found many of them over the years, perhaps most of them. Typically, if you don’t know where to step and decide to charge down a shoreline toward a few breaking fish, you’ll end up in one kind of trouble or another. So, safety must be a priority. Next, I wander around in my car and try to find out which harbor has the most bait and which part of a 12-hour tide cycle the fish are using to feed, because each year is different. Once I know these elements, it’s simply a matter of working out the details—lures, presentations, the effects of wind direction, as well as any patterns of bait movement around the harbor.

My lure selection has more to do with the type of bait than it does anything else. For example, in 2015 when huge schools of 3- to 4-inch porgies filled the harbors, bucktails were better than poppers; in 2016 with lots of peanut bunker, poppers and pencils poppers were sometimes best. There was even a period of three days when 7-inch C10 RedFins produced stripers and the occasional big blue when peanuts were pushed into water only about a foot deep.

As you can see, I like to keep my arsenal simple. Decades ago, I toted a huge bag because I wanted to be ready for any situation. The problem was I had trouble removing a single lure from the bag without lifting a half-dozen others, and it dawned on me that most of the lures I dragged along stayed in the bag only to rust from neglect. It may have taken too long, but I learned my lesson, and today I’m a minimalist.

My arsenal includes only the lures that consistently work in the harbors in autumn, and my lure bag is now more usable, with easy access to every lure I carry. (Of course, my back and neck are also beneficiaries of the lighter bag.) I further simplify my choices by carrying lures that are basically white. In the shallow harbors, white bucktails weighing between ½ and 1 ounce suit my needs. I use split-tail pork rind (I stocked up before they went out of production), and also carry Fat Cow Strips in the same 5-inch length that work just as well. When the tide is higher, I’ll primarily use ¾-ounce bucktails, but the ½-ounce size is ideal at the bottom of the tide. The trick is to find the right bucktail to address the following needs: distance, water depth, and retrieve speed. If I normally use a ½-ounce bucktail at the bottom of the tide, but the fish are further out than usual, I’ll switch to a ¾-ounce size and reel faster to keep it above the mud, debris, and weeds.

Although I work bucktails low and slow when there’s depth and current, in skinny water without current and modest depth, the speed of the retrieve seems to matter a lot less.

Likewise, the poppers I use are basically white and I’ve found that I typically have the most success with a Super Strike 2 3/8-ounce Little Neck Popper. This size allows for a perfect combination of casting distance, gaudy splash, and an excellent swimming action at slow speed. There is a tendency for anglers to work a popper quickly when blues are feeding, but that isn’t always the right choice for stripers. I fiddle with retrieve speed until I find the day’s sweet spot. Generally, stripers prefer a deliberate action, while blues seem to change their minds from minute to minute.

There are also days when pencils poppers outproduce standard poppers, so vary your retrieve speed. Although I do use Gibbs pencils, the Cordell 1-ounce Pencil Popper is ideal for the harbors where there is usually little wind and extended distances aren’t generally needed. Indeed, all colors work well, but I tend to gravitate to chrome-sided ones for just a little flash. However, in the interest of full disclosure, fish have chewed their way through the chrome coating on many of my Cordell pencils, leaving almond-colored plastics that are equally effective.

It may be tempting to believe a smaller or light power rod will perform just as well as the outfits mentioned above, but it just ain’t so! Remember, you’ll sometimes need to cast lures heavier than 2 ounces, make long casts, and steer teen-size stripers away from docks, moorings, and bottom debris.

When there’s a fall ocean-run of fish, I’ll be waist-deep in the suds, but when the ocean pickings are slim, I’ll be slinking around the North Shore harbors looking for the one with the biggest schools of bait.