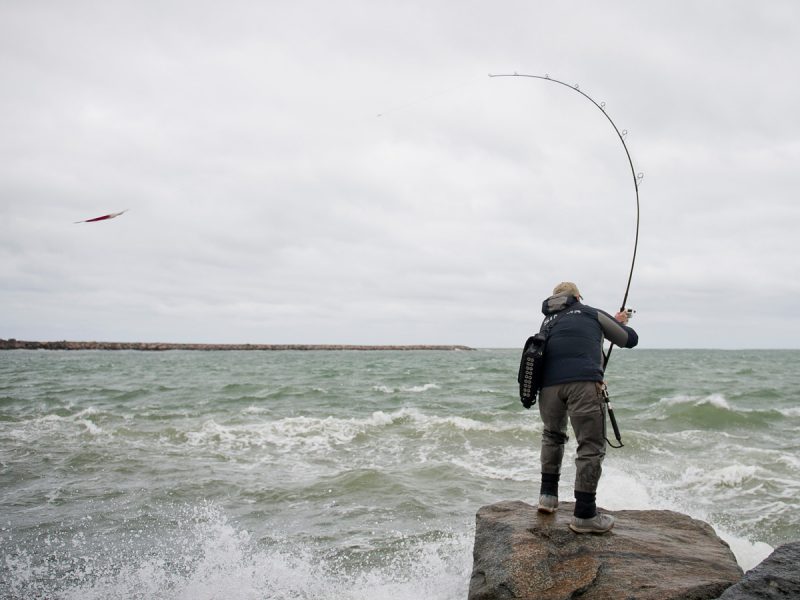 According to the chart I’d studied that afternoon at the office—at the expense of doing actual work—about 200 feet away from where I was standing, the bottom dropped sharply into a channel. “I can reach that,” I thought, while eyeing the chart’s legend and estimating the distance. But by the time I’d reached the water and saw just how far away the channel marker was, I began to have my doubts. My casts with eels, metal lips and light bucktail jigs fell considerably short of 200 feet, and as I prepared to leave, a boat motored up, lights off, and began drifting just off the channel edge. Though I couldn’t see the fishermen, I could hear them.

“Look at the fishfinder!” one of them said.

“Stacked up on the edge, just like last night,” the other answered.

I sat for a while, casting occasionally, but mostly listening to the boat fishermen catch what sounded like very big stripers.

I rarely stress over casting distance when surfcasting. Even in locations like the Cape Cod Canal where big fish frequently break water 100-plus yards off the bank, many bass—many very large bass—are caught just a short lob cast off the rocks. But sometimes, the fisherman who casts farthest who catches most. Whether the bass have hunkered down on a piece of offshore structure or they are chasing around a school of baitfish, knowing how to add some yards to your cast can save your day in the surf.

To immediately improve casting distance with every lure, rod and reel you use, downsize your line. Switching from 50- to 40-pound-test braided line sacrifices a little strength, but can add significant casting distance. Fishermen in rocky areas may be leery of changing to a thinner diameter line, but a long monofilament leader, spliced into the main line by an Albright knot, will give some added abrasion resistance against boulder-bound stripers. Some braids have a slick coating that helps the line leave the spool and shoot through the guides with less resistance.

The way the line lays on the reel also affects distance. The less friction generated as the line comes off the spool, the farther the cast will go. Several reel manufacturers have been giving the line lay more attention in recent years. Shimano’s Ultegra XTD, part of their Long Cast Surf System, lays line perfectly flat on the spool by using super slow oscillation. It takes 50 turns of the reel handle for the spool to complete one oscillation. The resulting perfectly flat line lay minimizes friction during the cast.

The designers of Van Staal’s X-Series paid particular attention to creating an even line lay, which, in addition to improving casting distance, also increases the spool’s line capacity. Regardless of what reel you use, keep the spool as close to full as you can to achieve the greatest possible casting distance.

Some reels have a long-cast spool—that is, a spool that is tall and has a large arbor that allows line to easily shoot off the easily during the cast.

When it comes to casting distance, more important than length or action is using a rod that is rated for the lures you plan on throwing. Every rod has a “sweet spot,” a weight that it casts best. For example, my Lamiglas Infinity Surf 11 MHS comfortably casts lures from 1.5 to 5 ounces, but it casts 2.5- to 3-ounce lures the farthest. Finding your rod’s sweet spot is a matter of feel—the rod will load smoothly on the cast and the lure will take off like a rocket.

Your own casting stroke is more important to casting distance than any equipment. As with a golf swing, technique trumps strength. Trying to overpower your cast isn’t going to send your lure 100 yards into the surf. Slow down and let the rod do the work, and you’ll see a marked increase in casting distance.

When going long for surf stripers, lure selection plays a huge part in reaching the fish. Finding a balance between a lure that casts well and makes an effective presentation for the location is the tough part. Just because the fish are far off the beach, doesn’t mean they are in deep water. Heavy, long-casting lures that sink too quickly will drag bottom or pick up weeds.

For this reason, my nighttime plug bag is heavy on needlefish when I need distance to reach the stripers. In addition to casting farther than just about any other plug, needlefish are some of the most versatile striper lures available. No matter what location or conditions you fish, there is a needlefish out there that will catch fish, from small floating models for calm waters to big fast-sinking plugs for rough seas and strong currents.

Long-distance casting stubby needlefish like the Super Strike Bullet merit extra consideration when targeting far-out fish. These lures, dressed up with feathered tail hooks, can have a wiggling, pulsing action that rivals soft plastics or bucktails, giving you the fish-attracting moves of those lures and the distance-casting benefits of a needlefish.

I always stash a few bottle plugs in the bag as well, provided I’m fishing somewhere with enough current to make them effective. Darters such as the Super Strike Zig-Zag, though not built for distance like bottle plugs, can reach offshore bass as well, and these plugs will work in moderate to slow currents. I have found that many darters tumble and lose distance when casting into a headwind.

Experimenting with long-casting lures could help you strike gold. One spring night, my friend Dave and I were casting to a current seam far off the beach where a school of bass had set up to feed. The water was shallow and the current was slow, making it the perfect place to fish 1- to 1 ½-ounce bucktails. The only problem was that the bucktails fell well short of the rip. When the onshore wind would slow momentarily, and we’d get a few extra feet on our casts, we almost always got hit within the first few turns of the retrieve. If we didn’t hook up in the first few cranks, the rest of the retrieve was over dead water. I briefly clipped on a 2-ounce bucktail, which got the distance I needed, but became immediately buried in weeds. I compensated by retrieving faster to keep the heavier jig off the bottom, but the bass weren’t interested in that. I tried bottles, darters, needles and even poppers, but the bass only wanted the jig. I was considering a move to somewhere the bass might be closer when the sound of Dave’s screaming drag made me reconsider. The fish took a long time to subdue, but Dave eventually steered it into the shallow water at his feet, all 42 pounds of it. In the mouth of the big striper was a 2-ounce bucktail, tipped with two pork rinds. The extra strip of pork slowed the bucktail’s descent just enough for it to hover in front of the big bass during Dave’s unhurried retrieve.

Choosing lures to reach far-off stripers is a little easier in the daylight. Country-mile casters like metals and pencil poppers put stripers on the beach for daytime surf-fishermen throughout the Northeast. Unless sand eels are present, I prefer wide-bodied metal lures, like a Point Jude Nautilus, Hopkins No=Eql or Acme Kastmaster that ride high in the water column and have good action. A dressed tail hook will add to the action. When sand eels move in, especially during the fall, slimmer metals like the A.O.K. T-Hex and Ava Diamond Jig, are the most productive metals. 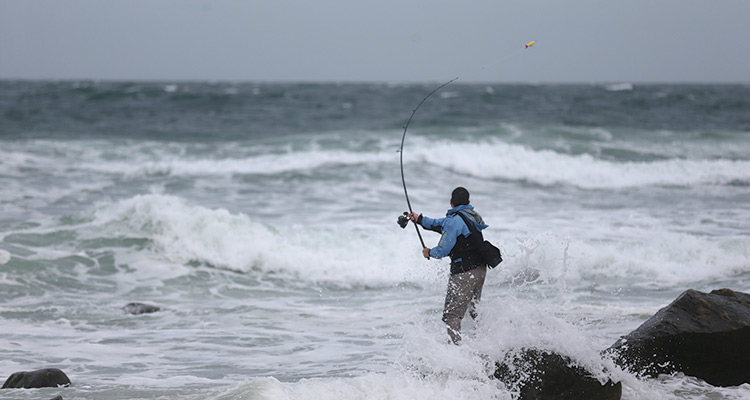 I have a spot, where a drop-off gives up big bass any time I can get a live eel there. Unfortunately, without a stiff wind at my back and an extreme low tide that allows me to wade closer to the drop off, I can’t get an eel anywhere near the structure. Nevertheless, this spot is on my radar anytime the wind howls due west around the new or full moon. It may happen only once or twice a season, but it’s as close to a sure thing as surf fishing gets.

An offshore wind helps put offshore spots within range, especially with lures and baits that don’t cast very well—like metal lips or eels. Of course, many spots depend on an in-your-face breeze to bring in the stripers there. Sandbars usually require an onshore wind to create the white water where stripers love to feed. Under these conditions, use needlefish and metals to push through the wind and reach the fish.