Doug Brodsky was fishing a few years back off Montauk when he spotted a familiar sight swaying in the chop a few hundred yards off the beach. Bruce Froh was jigging bucktails from his 16-foot tin boat, the Blue Frog, reeling in striper after striper. This sight on this particular day wasn’t particularly out of the ordinary. In fact, this picture was quite common. 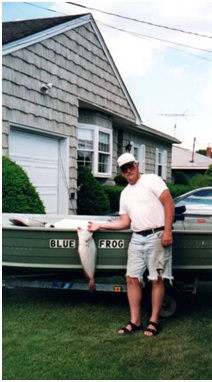 The next day, Doug approached Bruce and asked him how he did it. Bruce said he’d show him and asked him to come out on the boat with him.

“Are you crazy going off Montauk in this little tin boat?” Doug replied.

Maybe he was, or maybe it was Doug who was the crazy one for accepting the invitation. Nevertheless, they headed out and began dropping Bruce’s homemade bucktails. Before long, Doug seemed to forget that he was in a 16-foot tin boat. That day, 52 stripers were caught exclusively on Bruce’s “Blue Frog Bucktails.” Doug soon realized the potential in these handmade jigs. 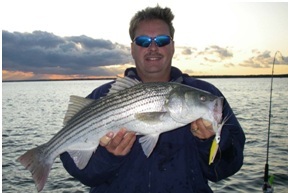 “Why don’t we start producing and marketing these? The local fishermen already use them. Let’s do something with this,” Doug told Bruce.

Bruce was hesitant but granted Doug the opportunity to do what he wanted. This is when “Blue Frog Bucktails” went from the homemade, hand-tied jigs they were in the past, to the staple of inshore jigging that they are today.

From here, business partner Tom McClouglin joined the team and they began making plans to manufacture the famous swing-hook bucktails in bulk. There was only one thing left to do, in Doug’s mind: Change the original (and relatively unattractive) toad-like brand logo to something more recognizable. And this time, make it look more like a frog. A Blue Frog.

The first round of swing-hook bucktails sold like mad, and the team began modifying their bucktails and offering different styles for different water conditions.

A wide selection and variety of bucktail types was important to the team as they began developing their jigs. The swing-hook was the first that Bruce Froh created, and the first that Blue Frog manufactured. This swing-hook design gives a more realistic presentation of the jig and bait, allowing for more strikes and hook-ups. 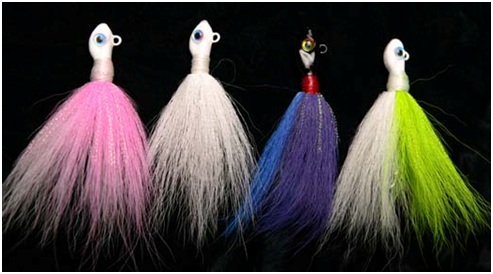 Sizes range from small ½-ounce bucktails perfect for targeting smaller fluke and other fish in skinnier, slower-moving water, to large 8-ounce “deep divers,” which excel at getting down and holding in the deep holes where the doormats reside.

Head designs vary as well, from the “arrow-head” design perfect for waters running fast and deep, to the chunkier “pot-belly” heads, which ride higher in the water column for slower and skinner presentations.

Chances are, in whichever situation you find yourself fishing in, there is a “Blue Frog Bucktail” available to put fish in your boat or at your feet.

To this day, Bruce can still be spotted fishing his “Blue Frog Bucktails” in the 16-foot tin boat, “The Blue Frog” off the coast of Montauk. “A few weeks ago I spotted Bruce heaving in the chop, fishing like a maniac, and watched as he jigged up a 49-pound striped bass with a Blue Frog Bucktail in its mouth.”

More information can be found on the website at Bluefrogbucktails.com.