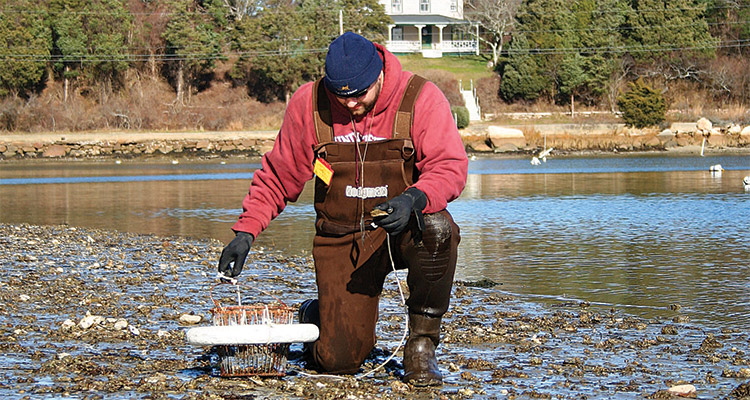 Many years ago, I made an attempt at earning extra income by shellfishing commercially. Fresh out of college, still with a strong back and ripe with enthusiasm, I paid 140 dollars for a town commercial shellfish permit. My career would be short-lived, however, consisting of only two trips, both for oysters.

On my first venture out, I spent five hours on the water and was pleased to have harvested a half bushel of oysters. My back was sore, and my hands were sliced and bloodied from the sharp shells, but I was proud of my accomplishment. I rushed to the local shellfish monger, who paid me a meager 52 dollars for all my hard work. On my next outing, I learned that my honey hole was not as prolific as I had imagined. I’d plucked the area pretty well on my first trip, and the pickings were slim. Trip number two only yielded 36 dollars.

Luckily, I had a full-time job and decided that graphic design would be a wiser career path for me than commercial shellfishing.

I still enjoy gathering oysters in the fall, and each year I make several trips back to my honey hole, but I only take a few dozen per trip, as I don’t want to wipe my only spot clean.

Wild oysters are not as abundant as they once were, but if you look hard enough you can find them. Some towns will seed oysters, and these areas can be especially productive. Oysters tend to favor rocky areas, generally in bays and harbors that get plenty of tidal flow. They begin their lives as “seeds” that drift through the water seeking out something to anchor on. Once a seed finds a suitable location, usually a rock or another mollusk shell, it starts building a foundation for its new homestead. Unlike other types of bivalves, oysters cannot move. An oyster creates a secretion that bonds its shell to a hard surface, and once it’s there, it’s there for a lifetime. This feature makes them pretty easy to locate. Unlike steamers and quahogs, oysters lack the ability to dig and can be found sitting right on top of the seafloor.

In most areas, you can gather oysters from fall through early spring – I generally begin in October or November. The water quality is much better during the colder months, and you can taste it in the shellfish.

Oysters tend to congregate in the zone from the mid-tide mark to just above the low-tide mark. Because of this, I like to head out at dead low tide. If you’re lucky and have a great spot, you can simply walk along the waterline and pick them up off the beach. Usually it’s a bit more work than that, however.

I gear up with a pair of neoprene waders, a quahog basket rake, a shellfish gauge, some old leather gloves, my basket and float, a flathead screwdriver, and my license.

You will know right away if you are in a good area. Seek out a spot that features a bottom of rocks, mud and broken shells. Walk slowly, try not to stir up the bottom and pay close attention to areas with lots of dead oyster shells on the bottom. An oyster’s favorite thing to attach to is another oyster shell. Sometimes you can simply walk along and scoop them up off the bottom with your quahog rake. Other times, you might need to vigorously rake up baskets full of broken shells and sift through the debris (kind of like mining for gold). The best way to learn is to watch someone else do it. Different spots require different techniques, so don’t be afraid to mimic the locals.

Once you find an oyster, be careful. It won’t bite you, but can slice your finger wide open with its razor-sharp shell. Always wear gloves.

Chances are good that when you find an oyster, it will be clinging to another object, be it a rock, an old shell or another oyster. By law, in most locations you can only harvest oysters that are more than 3 inches in overall length. You should also be aware of small seed oysters that may be attached to adult oysters. By law you must dislodge any seeds that are growing on your quarry.

In recent years, oyster farms have been popping up at an epic rate along our coastline. Oysters are fairly easy to cultivate and there is enough demand for them that they have become a profitable commercial commodity. Unlike many other forms of aquaculture, oyster farming is actually beneficial to the environment, and poses very little threat to native populations. Oyster beds filter out a lot of algae from the water, and help improve overall water quality.

I recently paid a visit to one of the local farms, and it was an enlightening experience.

For the past 20 years, Dave Ryan has been running Cape Cod Oyster Co., producer of Wianno Oysters, which has two farm locations on Cape Cod. These locations crank out around 100 bushels of primo specimens every day. Their crew of eight works hard through rain, snow, ice and wind, and conditions are often quite inhospitable, especially in the winter. In warm-weather months, health code regulations require oysters to be either iced or refrigerated within 2 hours of being plucked from the sea. Dave’s crew works fast, and they have developed an efficient system that allows them to fill their daily quota in a single trip, in less than two hours.

Growing oysters begins with seeding. On Dave’s farm, batches of seed are set out in early spring. They begin their lives submerged in fine mesh bags, which protect them from predators. Oysters grow quickly, and after several months the seeds will have grown exponentially in size. They are then transferred into flat mesh bags, and then placed atop the baskets that hold the adult oysters. When harvesting, Dave’s crew rarely has to leave their boats. They simply pull in a crate of adult oysters, empty it, and then fill it back up with a new batch of seed. The farm is constantly in full production and operates like a well-oiled machine.

The oysters are ready for harvest after about 14 months, at which point they will be around 3 inches in length.

Wianno Oysters sells their product exclusively to one wholesaler, Aquanor, which operates out of Boston and sells seafood to many high-end restaurants and markets across the country. The farm delivers fresh oysters five days a week, which ensures a constantly fresh supply for consumers.

One benefit of farming oysters is that, if grown in the right location, they can be harvested continuously throughout the year so there is never an off-season – meaning a steady income. They are also a reliable crop that is disease resistant, and their robust shells ward off most predators.

So, if you’re looking for a safe, economical and environmentally friendly item at your local fish market, oysters should be at the top of your list. Chances are they are from a local source and haven’t been lurking behind the glass as long as some of the other seafood. Buy fresh, buy local!

Oysters are perhaps best simply served raw and ice cold, with a dash of cocktail sauce and a spritz of lemon juice. And, plan on spending quite a bit of your time prying them apart with a large flathead screwdriver. If your culinary habits are on the squeamish side, cooking them might be a better option. Following are a few of my go-to recipes.

Other Great On the Water Recipes

Cooking The Catch 1 & 2 Combo
Get both of these well written and resourceful cookbooks for one reduced price. Hundreds of great recipes for local seafood.

Last winter, Dave and I hosted a cooking demonstration at a local angler’s club. We whipped up five recipes that featured local seafood. Dave made this appetizer, which might be my new all-time favorite oyster recipe. Try it!

Cut 12 slices, about ½-inch thick, from the French bread. Brush with olive oil, then toast to make crostinis. In a large frying pan melt the butter, add the shallot and sauté for about 2 minutes. Add the wine and then reduce by one half over medium heat. Add the tarragon and the shucked oysters, and sauté for about two to three minutes, until the oysters are just cooked through. Add the oyster liquor and remove from heat. Place the crostinis on a serving platter or in individual bowls, and top each one with an oyster. Liberally ladle the remaining juice on top and serve. This is an amazing dish that can convert an oyster hater into an oyster lover. Oysters with tarragon are a match made in heaven!

This classic American dish dates back to 1899, where it was created at Antoine’s Restaurant in New Orleans. It was considered to be so rich that it was named after the richest man at the time, John D. Rockefeller.

Position a rack in the top third of the oven and preheat to 475 degrees. In a food processor, finely chop the garlic. Add the green onions and spinach, and process until finely chopped. Transfer to a bowl.

Combine butter, breadcrumbs, Sambuca and hot sauce in the processor. Pulse until it’s well blended. Return spinach mixture to processor and mix until just blended. Season with salt and pepper to taste. Next, pack rock salt into a baking sheet to a depth of around 1/2 inch. Arrange shucked oysters on top, making sure not to spill any of the oyster liquor. Top each one with about a tablespoon of the mixture. Sprinkle with cheese. Bake until they are brown on top, about 6 to 8 minutes. Serve with lemon wedges and devour!

This luxurious and classic recipe is easier to prepare than one might think. The hardest part will be shucking the oysters. The most important factors in preparing a fine oyster stew is one: do not boil the milk (pull it off the burner when it reaches 200 degrees) and two: do not overcook the oysters, which will become tough and rubbery if overdone.

Combine the milk, oyster liquid, evaporated milk, hot sauce and white pepper in a saucepan. Cook over medium heat, stirring often. Insert a thermometer and watch it closely – do not let it get above 200 degrees.

Meanwhile, in a large frying pan, melt the butter over medium heat, stir in the shallots and sauté until they are softened and clear, about 3-4 minutes. Add in a liberal pinch of saffron. Now, add in the shucked oysters and cook for about two to three minutes until their edges begin to curl. Remove immediately and use a spatula to transfer the oysters and their liquid into the pan with the milk mixture. Stir, and add salt and pepper to taste (it shouldn’t need much salt). Ladle into serving bowls, and then garnish with chopped scallions and oyster crackers. Serve with fresh bread, which you’ll need to sop up the bowl. If you really want to take it over the top, add some crispy bacon bits on top (you will thank me).
Bon appétite!