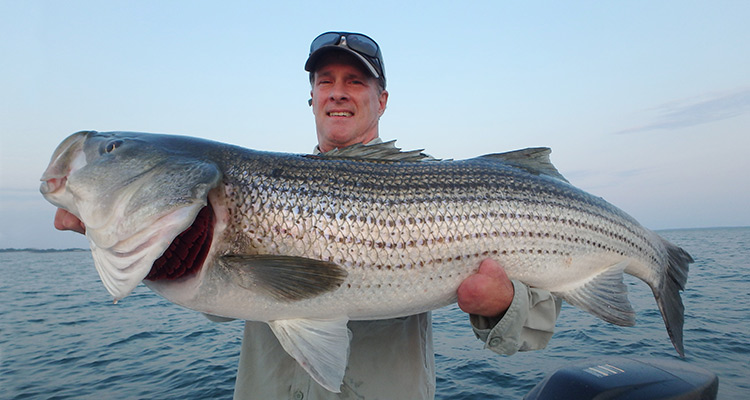 Over the past two seasons, Long Island Sound has benefited from an immense influx of adult menhaden, known to most fishermen as bunker, which are a staple in the diet of large striped bass. In fact, if I had to pick the best live bait to use for striped bass in the daytime, it would be a live bunker.

Aside from the fact that striped bass can’t resist them, what makes bunker a great bait choice for anglers looking to tangle with a big bass is how easy they are to obtain. You can find bunker in any river or harbor. Sunrise is prime time to catch them, as they will be swimming near the surface and are easy to spot by looking for “nervous water” or telltale splashes.

There are two easy ways for fishermen to catch enough bunker for a day of fishing. I use a 10-foot cast net made specifically for bunker that has a fast sink rate and large diameter mesh. After spotting a school near the surface, I’ll motor alongside or drift close by and throw the cast net. With one good throw, I can usually fill my baitwells. If the bunker are down deep, which is more common in the late morning and afternoon, I’ll use my fishfinder to locate them and then throw the net over the school, allowing it to sink to the desired depth before closing it.

The second, more common method is to catch bunker using a snagging hook, which is a large lead-weighted treble hook. Simply cast it past the school and make long sweeps of your rod to snag the bunker.

Once your baitwell is filled with enough lively bait for your trip, head out to your favorite striper grounds. (However, don’t overlook the river or harbor where you caught the bait, as there may be big stripers and bluefish lurking nearby.) Make sure your live well pumps are working properly and don’t overcrowd and kill your baits. A good rule of thumb is to put in no more than one bunker for every gallon of water in your live well. I have two large, circular live wells with high-speed pickups and constant water flow that will hold about 48 bunker in total.

When fishing in water less than 20 feet deep, which is usually productive at dawn and dusk, live-lining bunker without any weight is the best presentation. The advantage to live-lining in shallower water is that it allows the bait to swim freely and look natural. I rig my live-lining rod with a long leader made of 8 feet of 50-pound fluorocarbon. If the fish are feeding aggressively, I’ll hook the bunker on a 9/0 circle hook and allow the bass to run with it before coming tight.

When fish are being finicky, picking up and dropping the bait without engulfing it, I will use a 3/0 VMC treble hook and cut one hook point off, making it a double hook—one hook to hold the bait and a second hook exposed to stick the bass. (You do not need the third hook, which can hurt the fish and tangle around the leader.) Whether using a circle or double hook, hook the bait through the nostrils, which will allow it to be pulled head first and swim naturally. When fishing with a double hook, I set it as soon as the bass grabs the bait so I can snag it in the lip. Due to the bait’s size, the fish that I target with live bunker are mainly 34 inches and up.

When live-lining, anglers can choose to use a spinning or conventional setup. For spinning rods, I use a medium-action rod capable of lobbing the bait away from the boat, and my preferred spinning reel is a Daiwa Saltiga 4500 loaded with 50-pound-test Suffix 832 braid. For my conventional setup, I like the Lamiglas Triflex TFX 7030 CT rod paired with a Daiwa Saltist-BG 30H, also loaded with 50-pound braid.

Once you have your boat positioned up-current of the structure that you wish to fish, shut down your engine and lob-cast the baits away from the boat. Depending on wind and current, cast in the direction that allows the bait to swim away from the boat. When a bass is on your bait in shallow water, it will often chase it up to the surface and you will see the bass swirl on the bait before inhaling it. I have also seen bass tail-slap the bait out of the water and then swallow it once it lands.

When fishing in more than 20 feet of water, I switch over to a three-way rig. Throughout the summer and whenever the sun is high in the sky, three-waying live bunker is my go-to method. The advantage of three-waying is that this technique allows you to fish your bait at a controlled depth a few feet off the bottom in deeper water. The three-way rig is made by tying a three-way swivel to your main running line and then tying a 10-inch piece of monofilament with a surgeon’s loop onto the second eye to hold your sinker. (The reason to use a loop is it allows you to easily add or remove a weight.) This rig often requires a fairly heavy sinker because the bunker will create drag in the water and you will need to use enough weight to keep the rig vertical. On the third end of the swivel, tie on a 5-foot length of 50-pound-test monofilament or fluorocarbon and then your hook. The same conventional outfit mentioned for live-lining is also a good choice for three-waying.

Three-waying requires constant awareness of the water depth, so stand in an area of the boat where you can see your sonar unit. The goal is to stay close to the bottom without allowing the weight to drag and snag. Start by positioning your boat up-tide of the reef you are targeting. As you drift over the reef and the bottom rises, reel in just enough to keep the sinker from hitting the bottom, but don’t bring it more than 5 feet off the structure. As you continue to drift into deeper water, keep your thumb on the spool and let out just enough line to stay in the strike zone within 5 feet of the bottom. When fishing a three-way, I stand with one hand on the fore-grip and one on the butt of the rod so I am ready to strike. When I feel the hit, I lower the rod tip to the water and then strike the fish.

Three-waying live bunker can be an incredibly productive method for catching trophy striped bass. This rig allows anglers to fish the deeper reefs that dot Long Island Sound and keeps the bait close to the bottom where the biggest bass spend the majority of their time.

When bluefish are in peak numbers during August and September, I’ll often rig some rods to catch the ones that patrol the reefs. Last year, we had large numbers of 12- to 16- pound bluefish that provided great sport for anglers on light tackle. When targeting bluefish, I add a 6-inch piece of thin wire to the eye of the hook via a haywire twist and use another haywire twist to tie on a stinger hook that will go just behind the bunker’s dorsal fin. (The wire should be flexible enough that it doesn’t prevent the bunker from swimming naturally.)

When a bluefish tries to bite your bunker in half, it will end up being grabbed by the stinger hook. When fishing a stinger-hook rig, keep your reel in gear and strike immediately to prevent deep-hooking the fish. Don’t be surprised if you catch a striper when rigged for bluefish. There were many times when we were catching bluefish when suddenly a nice bass took the bait.