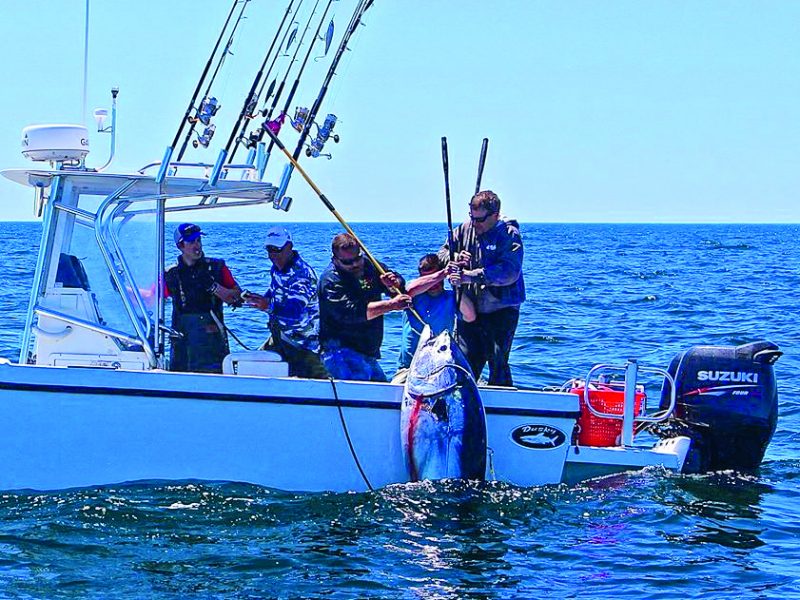 The tackle available to the modern angler has advanced rapidly over the past 15 years, most especially so in the light-tackle spin category. Twenty years ago, chasing tuna with spinning rods consisted of beefed-up striped bass reels and rods designed for tarpon, and the capabilities allowed for success on only the very small-sized school fish.

Braided line had already moved from the kite world into fishing applications. Using 50-pound test braided line joined with a four-turn Surgeon Knot or a Bimini in the braid to a Bristol knot using 40- or 50-pound fluorocarbon with the limited drag capabilities of the reels was enough to land these 15- to 40-pound fish. With the sudden appearance of huge schools of willing 1- to 2-year old tuna in 2004, the wheels were set in motion for rapid advancement.

Cape Cod became an easy place to test gear when the amazing year class from 2003 decided that southern New England was a good place to return each June. As these fish grew, I was left outmatched and undergunned with inferior tools for the trade, and the need for larger reels, specialized rods, and a better system to attach the leader and terminal tackle. The Japanese tackle industry had already begun building reels capable of handling larger gamefish, with the growing popularity of casting and jigging for giant trevally and dogtooth tuna. Many companies jumped in, and the revolution hit full swing.

From 2006 to 2009, the average size of the bluefin grew from the low 40-inch range to more than 60 inches, which provided ample time to go through the painful process of testing everything in the system and then breaking everything and anything while developing a successful approach to gearing and rigging against the bigger classes of fish.

The old saying “There’s more than one way to skin a cat” holds true in all aspects of life, as with a particular angler or captain’s way of rigging up their gear. I am not saying this is the only way to rig that will prove successful at landing outsized tuna on light tackle spinning gear, however the systematic approach I have developed has allowed my crews to virtually rule out the gear or terminal tackle failure as the cause of a poor outcome once a big one has been hooked. By eliminating any weak points from the rod, reel, line, leader, and attachment to the lure or jig it allows the anglers to put the necessary pressure on the fish to bring them up to the boat for a shot at end game. Consistency, as well as constant maintenance on the gear, will heavily stack the deck on your side, not withstanding the need to improve as an angler or captain of your own boat.

I use strictly 7’6” to 7’9” casting rods aboard my boat, and prefer 5’2” to 5’4” jigging rods. I tested many different styles and brands of rods, from the high-end Japanese boutique models down to the custom-built rods cut down off of other successful blanks to try and get the right action from the tip to work lures or jigs, as well as enough parabolic action while not compromising the ability lift the fish—rods need to have a proper shut-off point along the midsection of the rod so the bend does not pass into the foregrip area. The closest I got to the action I was looking for was a few of the rods designed to target GT, although they were very pricey and difficult to obtain. It was then that I worked closely with Yong Yan at Jigging World Corporation as he developed a series of rods specifically designed to chase large fish. I use the 150g popping rod for tuna under 100 pounds, and the 200g for tuna over 100 pounds. The 350g paired to smaller spin reels for tuna under 100 pounds, and the 450g for the larger models. These rods are very affordable to comparative offerings in the industry and are able to withstand the major abuse they receive aboard my boat each season. There are other rods fully capable from numerous other manufacturers, but I stick with something once it works for me, and the relationship I have with my affiliates is important to me so loyalty is a factor. Explore the many options and fi nd a rod similar in action and strength that will work for you.

For whatever reason, there just aren’t many choices in reels. Although there are a few newer choices over the past two seasons, I have had incredible success with Shimano, and strictly use them aboard my boat. The large model bluefin require the Shimano Stella 18000 with faster retrieve for casting topwater, and the 20000 Stella for jigging as it has a larger spool and slower retrieve ratio, which is better for working jigs up from deeper drops. When chasing smaller school bluefin, scaling down the gear provides much more fun which is where the Shimano TwinPower 14000 and even 10000 reels come into play for both topwater and jigging. Some anglers prefer overhead reels for jigging, which I also employ for less experienced anglers as they are much easier to work and feel the subtle hits that occur when dropping metal and soft plastics. The Shimano Talica 16 is a great choice for an all-around reel with enough capacity and drag, yet lightweight and narrow for the small jig sticks.

I use Tuf-Line Guide’s Choice Hollow Core line in 80-pound-test strength for the big reels with no backing. It is crucial to have your reels spooled up by a knowledgeable tackle shop or rigging specialist. It requires extreme tension during the spooling process or it will bind up on a good run and bury itself under the bottom of the spool of line. Once the reel has been properly packed, I employ a hollow loop which provides a doubled line and knotless loop to join the Wind-on leaders I use.

I use a piece of number 6 straight wire bent in half and crimped snug instead of a rigging needle. Daho makes an excellent set of rigging needles that will also allow splicing of different diameter braided and Dacron lines. I like a nice tight loop on my line, and then attach a wind-on leader of 80- or 100-pound-test mono or fluorocarbon. Many prefer to make their own wind-ons, and there are great resources for step-by-step methods online. I have found that with the time involved and cost of materials, it makes more sense for me to use pre-made Wind-ons from BHP Tackle. Basil Pappas has been at the forefront of providing wind-on top shots, leaders, and spooling services for big game fishing pursuits for many years. The Casting wind-ons are built to 12 feet, the perfect length for allowing extra-long casts without a knot slapping through the guides, decreasing distance and wearing down the strength of the join. The jigging wind-ons are made to 25 feet, as no casting distance is required, it gives a great section of stealthy leader away from the line to the offering.

There are literally hundreds of knots you can employ to connect the leader to whatever is being delivered to the fish. Tying directly to anything typically isn’t a great idea unless it has a built-in swivel due to twisting the line or leader.

The only lure I tie directly to in my arsenal is the RonZ performance bait, which has a built-in HD swivel. All others are tied off via Palomar knot to a 240-pound Spro Power Swivel and either a 185- or 255-pound Spro Power split-ring to attach the plug or jig. Jigging setups also have an additional solid ring with a single assist hook attached via the split-ring, allowing the jig to swing freely once the fish is hooked, so as to not provide leverage for the fish to throw the hook.

The Spro Power system allows the swivel ring to pass around the split ring without binding, which is very important for providing correct action to the plugs and jigs, as well as prevent the aforementioned leverage to the fish.

Every lure requires certain hook configurations to make it work properly as well as get a solid hook set once a fish is tight to your line. There are many different configurations and brands of hooks that will work, using both single hooks as well as trebles. All of my jigs and some of my stickbaits are rigged with an assist cord to a single hook, the rest are attached via the same Spro split-ring to the wire loop in the plug. I choose tinned hooks only as they degrade quickly if a fish pops off during the fight with the plug or jig still attached.

With this system I have eliminated most of the gear-related issues that can occur. It is still very important to inspect the entire system after every outing to ensure the reel is fully functional, the rod has no broken inserts or guides, and the line/leader has no nicks or weak spots. The task of choosing what specific lures and jigs to throw is a whole different cat to skin, so I will not go into any of that in this article. I hope this insight into how I rig up for the monster tuna improves your chances of landing that fish-of-a-lifetime on a spinning rod.