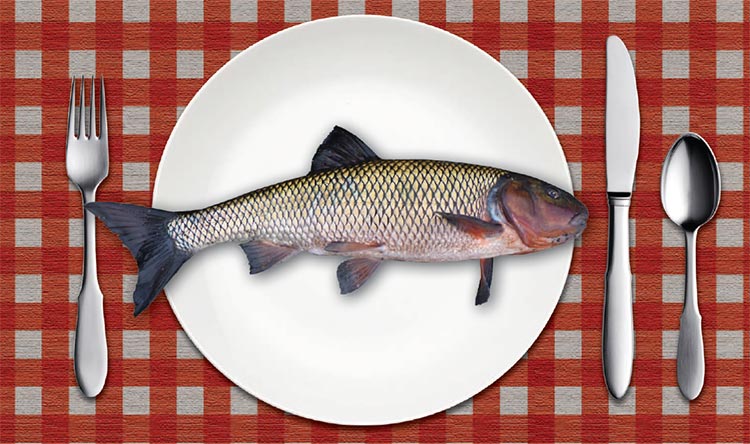 They taste like a wet paper bag with bones.” At some point, when I was a teenager, I read that about fallfish, those large, abundant, aggressive minnows common in most of the Northeast’s larger streams and rivers. I don’t recall where I read it, but I took the author’s word for it. After all, there must be a reason why fallfish are considered “trash fish,” I thought. If that description was even remotely accurate, I was not interested in trying one.

Many things changed as I matured, including my views on the so-called “trash fish”. I started to have some respect for all fish, even the ones I wouldn’t keep to eat. I also started to wonder about things, such as why Europeans value minnow species so much for sport and food? And why is it that Asian people seem to enjoy eating so many fish species that Americans disregard? And, if fallfish eat the same food as trout and bass and live in the same rivers, how is it possible that they could taste so bad?

Eventually, I started faithfully fishing a part of the Connecticut River that is noted for trout fishing. The trout there behave like trout. Some days the bite is on, but often it is not. The fallfish, on the other hand, are almost always obliging. Their abundance and reckless abandon combine to give the impression that this part of the river has an endless supply of large fallfish. Too bad I can’t eat them, I thought. Or can I? 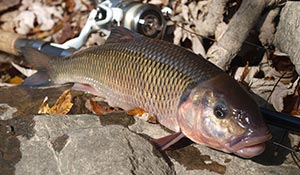 The fallfish (Semotilus corporalis) is the largest northeast minnow. Juvenile fallfish have a dark stripe that runs down the center of their body. They are a silvery shade on the top and sides of the body, but have a white shading on the belly. Breeding males develop a pinkish tone on the opercular region, although the species does not develop bright breeding colors. A typical size is 17 inches, but a fallfish can grow to be up to 20 inches long.

I finally questioned the statement that I had read so many years before and began my own investigation of fallfish consumption. It began where so many modern quests for information begin, on the internet. Not surprisingly, I did not find much information on eating fallfish, but I did manage to find a few websites that discussed it, including the Fish Nerds site (fishnerds.com). The Fish Nerds live in New Hampshire and were on a quest (since completed) to catch and consume every freshwater fish species in the state of New Hampshire. By the time I found their blog, they had already eaten fallfish, and reported that it was one of the better-tasting fish they had consumed up to that point. Brown paper bag? Apparently not. They did, however, report that fallfish were indeed very bony, and all those bones made processing and eating the fish difficult.

Fortunately, I had some experience with preparing and eating bony fish. My earliest experiments were with white suckers. I had read a magazine article that described how anglers in Missouri prepare redhorse suckers. These resourceful Midwesterners use a spoon or other tool to scrape the scales off the sucker. Then, they fillet the fish, leaving the skin on. Next, they lay the fillet skin side down and score the meat with a knife every ¼ inch, without cutting through the skin. Then, they bread the fillets and deep-fry them. The scores in the meat help the hot oil reach the bones and soften them.

I have had mixed results with this method, both with suckers and fallfish. It seems to work best for fish smaller than about 15 inches, as larger fish have thicker bones that do not soften as readily with this method. As you would expect with anything deep fried, the flavor of fish prepared with this method is quite tasty. Unfortunately, the texture tends to be crumbly. While the fillets of less bony fish such as perch and bass generally hold together when cooked, when you eliminate the bones in sucker and fallfish fillets, the meat wants to fall apart. Fortunately, crumbly fried fish makes good fish tacos. Put the fried fish in a taco shell or tortilla with whatever fixings you like (e.g., lettuce, cheese, salsa, and guacamole).

Chain pickerel are the bony fish that I have eaten the most. While I might fillet a larger pickerel and cut out the small Y-bones that are found in a row along the middle of the fillet, the smaller pickerel (less than about 22 inches) go through the meat grinder. I fillet pickerel just like I do any other fish, removing the skin and the ribs. Then, I cut the fillets into thin strips and run them through the meat grinder on the fine setting. The ground fish can be used in just about any recipe that doesn’t require whole fillets, like chowders, casseroles, or fish loaf. My favorite use for ground fish is in fish cakes or fish balls. While others might be able to taste some difference between pickerel, sucker, and fallfish, I consider them to be interchangeable when used as ground fish meat. 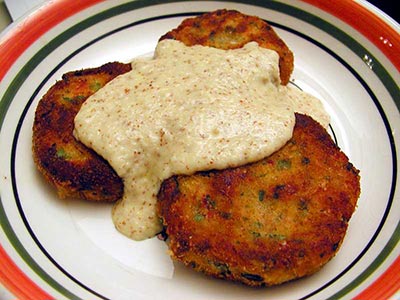 Thoroughly mix all the remoulade sauce ingredients and chill in refrigerator, preferably for a few hours. Meanwhile, mix the fish cake ingredients. If the mixture is too crumbly and won’t form a patty, add more egg; if it is too wet, add more breadcrumbs. Use your hands to form the mixture into cakes. You can either deep-fry the cakes by immersing them in hot oil or pan-fry them in a thin layer of oil.

A third method that I use for bony fish is pickling. Pickling has long been used by many cultures as a way to flavor and preserve food. The main benefit of pickling bony fish is that the vinegar dissolves the bones. I have used fallfish and suckers in my pickling experiments over the last few years, but pickerel make good candidates for pickling as well. My preferred method is to fillet the fish, removing the ribs and skin. I cut the fillets into 1- to 2-inch chunks, and then put them in the freezer for at least two days. According to the University of Minnesota Extension, freezing the meat for at least two days should kill any parasites that might be in the meat. This step is important because I do not cook the meat as part of this process.

When I am ready to make a batch of pickled fish, I thaw about 1 to 2 pounds of meat before soaking it in a strong brine solution made of four parts water to one part pickling salt. I mix up as much brine as I need to cover the meat and then soak it overnight in a non-reactive bowl in the refrigerator. When the meat is done soaking, it will be very firm because the brine will have drawn water out of the meat. I rinse the meat thoroughly before transferring it to whatever non-reactive container I will be using to do the actual pickling. (My pickling container is usually a plastic storage bowl with a lid.) I like my pickled fish sweet, so I make my pickling solution by heating one cup of white vinegar on the stove top and dissolving one cup of white sugar in it. I slice half an onion and alternate layers of meat and onions in the pickling container. I add 1 tablespoon of pickling spices to the vinegar and sugar solution before pouring it over the fish and onions.

After about 7 days in the refrigerator, the bones will be softened, and the meat will look white, as if it has been cooked. It is a good idea to stir everything about halfway through the week, just to make sure that the meat chunks aren’t sticking together. When the entire process is done, the meat should be pleasantly firm, with a hint of fish flavor that is dominated by the sweet and sour of the sugar and vinegar.

I have thoroughly enjoyed my quest to determine how to eat bony fish like fallfish, suckers, and pickerel, and I am pleased with my findings for two main reasons. First, and most obviously, I like to eat fish, and these are abundant, easy to catch, and tasty when properly prepared. Second, because these fish are abundant and not prized by most anglers, I don’t feel bad about harvesting them.

The next time you are fishing for trout or bass and struggling to keep the fallfish, suckers, or pickerel off your line, consider harvesting some of these bony fish and trying one of these methods. I think that you will be pleasantly surprised.