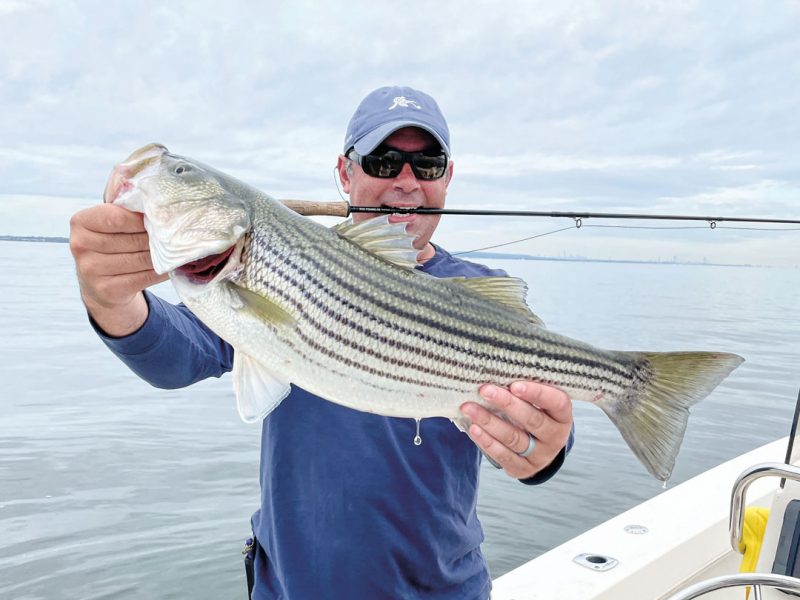 The clear, crisp air in November brings beautiful sunrises. With the New York skyline outlined by a deep-red sky and a little mist rising off the water, the scene was set for a magical day on the water—if the fish were willing to cooperate.

The truck reported 35 degrees when I got in, but with water temperatures still in the 50s, it was comfortable on the boat. As my angler stowed his gear in the console locker, I idled down the creek. Countless menhaden of all sizes tail-slapped and dimpled the surface. I gave a quick wave to another guide who was cast-netting those baitfish to live-line them out in the bay. A 12-inch live bait was not too big for some of the fish that were around.

Rather than follow the parade of boats out into the channel to live-line or troll, I eased my 23 Jones Brothers onto a flat that held about 5 feet of water. It was edged with marsh grass and loaded with bait. I had never fished with this angler before, so when he landed his first long cast right on the edge of the grass, I felt some relief. We were encouraged by a couple of swirls on the surface of the calm water, and a few casts later, he came tight to a fish.

I knew it was a big fish by the way it crashed the stickbait and pulled drag, and it turned out to be my angler’s personal best at 45 inches. He was excited, I was excited, and the big cow bass swam away strong. Fifteen minutes into the morning, and we’d already had a successful day.

The wind was pushing the boat toward the shoreline, so I periodically had to start the engine and reset the drift. Every time I moved the boat, at least a dozen bass spooked and swirled, indicating just how many fish there were on the flat. We caught fish in the shallows until the sun got higher in the sky and then followed the fish as they moved deeper. I probably burned three gallons of gas that day to catch a couple dozen nice bass. It was a memorable morning, but actually quite typical for fall in Raritan Bay.

Raritan Bay is a remarkable fishery that sits right under the noses of 10 million people. Despite hundreds of years of development, commerce, and population growth, the bay has sustained itself as a striper hot spot. As a dynamic stopover location for the migrations of bass, bluefish, and bait, there are many opportunities for success in the bay, whether you prefer to troll, live-line, or fish with light tackle and fly gear. Extend your season in Raritan Bay most years, you can catch fish right up to Christmas.

In the spring, striped bass swim through the bay to reach the Hudson River to spawn, then return to its food-rich waters to feed. Coming full circle, they stop in Raritan Bay on their way back from New England in late September or October to feed until they are ready to head further south. In recent years, this has meant an amazing fishery from October well into December. As a Northeast striper angler who fishes from New Jersey to Cape Cod, this gives me a 9- or 10-month season. 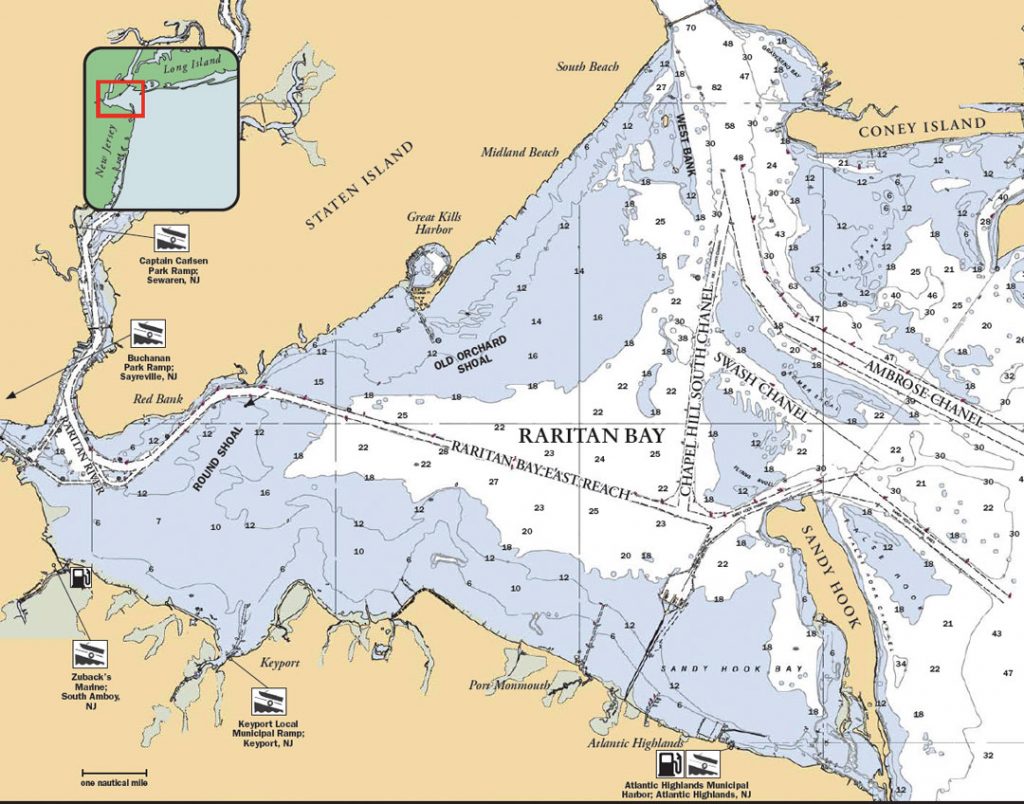 Huge schools of menhaden start piling up in the bay during late summer. These vary from peanuts to full-size adults of 12 inches or more. The peanuts arrive first and frequently bring blues and false albacore with them. Schools of large menhaden then arrive and can be seen finning on the surface in September, but it seems to take a few weeks for bass to find the mass of bait. This lag puts the best fishing between mid-October and mid-December.

It is worth noting that stripers and gator blues are not the only predators attracted to the bait that arrives in the bay. Bluefin tuna generally don’t come into the bay proper but could be as close as a few miles out, so it’s not a bad idea to keep a tuna rig in the boat. Marine mammals, including dolphins, pilot whales, and humpback whales, also feed on menhaden right in the shadow of New York City.

Weather is a key factor in the fall run, both in the timing and location of when the fish show up. It usually takes until mid-October for the water temperatures to cool enough for the bigger bass to show. I like to see the temp below 65 before expecting to see any real monsters, but smaller fish will arrive before that.

Where you’ll find fish depends on several factors, but water temperature and bait are the most important by far. Shallow water cools faster, so if there is bait in the shallows, you stand a good chance of finding bass. Look for shallow flats in 2 to 10 feet of water adjacent to channels. On calm days, you will be able to see the bait on the surface and fish breaking water. This is a great time for topwater lures and flies. Eventually, the shallows become too cool, and the bait and fish move deeper, out toward one of the reaches or even the ocean. On most days, massive schools of bait are easy to spot and give away the location of the fish.

In the fall, fish can be feeding anywhere from the surface to the bottom in 60 feet of water, so light-tackle anglers have a wide range of options when it comes to techniques. Again, the predominant bait in fall is large menhaden, so don’t be shy about fishing big baits.

If I had to pick just one artificial to fish, it would be a large Storm Shad in chartreuse or tan with flash. I keep a number of sizes and colors of this bait in my boat, and it’s what I have the rods rigged with at the beginning of the day. Other pre-rigged shads also work, or you can rig a shad body on a jighead.

Make sure to use enough weight to get these baits down since they tend to creep up the water column, especially when the boat’s drifting at a good clip. A shad bait doesn’t need a special technique to be fished effectively. Cast it out, let it sink to the desired depth, and reel slowly with the rod tip down. Other soft plastics, such as Slug-Gos and RonZs, are also effective.

Another bait that does an excellent job of imitating large menhaden is the flutter spoon. I like 8- to 9-inch ones weighing between 2 and 5 ounces that are made by Nichols or Tony Maja. Despite the weight, they tend to flutter their way to the bottom rather than sink straight down like a diamond jig. I pitch mine ahead of the boat on the drift and let it swing to me until it is straight up and down. I then lift the rod tip up and let it drop so the spoon falls with little tension on it. This helps achieve the fluttering action, but it can be hard to feel a bite since I am not tight to the lure. I try to stay as tight as I can while still letting the spoon flutter on the drop. I suggest a few practice drops next to the boat where you can still see the spoon to establish just how it flutters.

Finally, never pass up an opportunity to fish topwater plugs. Fishing around schools of huge menhaden is the perfect time to break out a Doc or similar large stickbait. These can be fished in the shallows or out in the deeper water; however, I frequently downsize my topwater offerings when fishing the shallows because 6-inch baits seem to get more eats in water under 5 feet deep.

The diversity of the fishing opportunities during the Raritan Bay fall run lends itself to some spectacular fly fishing. Just as with light tackle, this fishery begins shallow with fish devouring all sizes of menhaden. Gurglers or Crease flies will work on a floating line, but I usually have better luck fishing an intermediate line with a 3- to 6-inch baitfish pattern such as an EP fly, Deceiver, or Hollow fly. Clousers and other weighted flies work but can sink too fast and pick up weeds. Unless I’m fishing a topwater fly, I use an intermediate line on an 8 weight. The intermediate line is helpful because I can strip quickly in 2 to 5 feet of water to avoid dragging bottom and then let it sink a little in 5 to 10 feet of water without picking up another rod. Once I move out to the deeper waters in the middle of the bay, I fish sinking lines almost exclusively. I like 8 and 9 weights with 300- or 350-grain full-sink lines, though a 10 weight with a 400-grain line is not overkill on a windy day. This is the time for your big baitfish patterns. If you know how to tie a big Hollow fly, go for it, since the bait you’re imitating is a big adult menhaden.

If the bass are on the surface, fly fishing can be as simple as throwing into the blitz and stripping. When they are not showing themselves, swinging a fly under a school of menhaden or casting and letting it sink when you are marking fish is the way to go. The hardest part is just getting the fly in front of the fish. It is important to see how deep the fish are, either by eye or on the sounder, and then getting the fly to that depth. Often, making a cast to 10 or 11 o’clock and counting down the sink before beginning to strip is effective. This lets the fly sink without any tension on it for maximum depth control. On a calm day, an angler can get a fly down 40 feet. Casting 70 feet and feathering out 30 feet is acceptable as well. There are no pictures on the scorecard.

Sometimes, you just have to break out the boat rods. It is the fall, after all, and the wind can rip some days. When I fish with conventional gear, I either live-line menhaden or troll. When trolling, I pull mojos or heavy shad umbrellas, trying a couple of different rigs until I see if one weight is working better than another. These rigs are almost always chartreuse. When I fish live bait, I either snag or cast-net menhaden and rig them on a simple fish-finder rig with 1 to 3 ounces of weight. Again, if one weight works better, switch all the rods to that.

Captain Michael Behot operates MoonDog Fishing out of Keansburg, NJ in the fall.