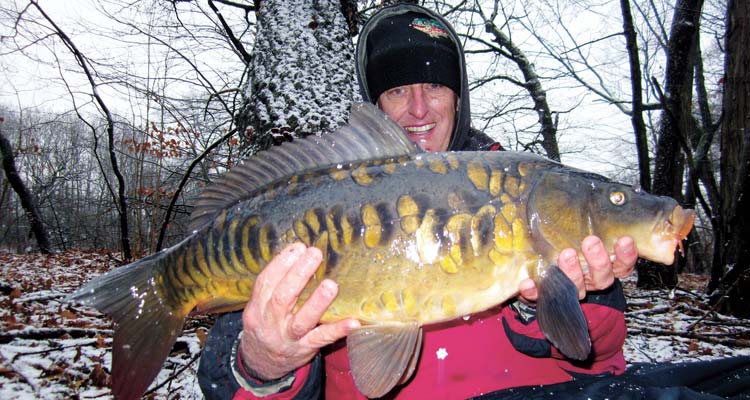 Pictured above: Early December and light snow just fell, but the carp were still hitting.

Most fishermen associate carp fishing with warm weather. The truth is these giants of freshwater are very adaptable and will hit in just about any water temperatures at any time of the year. In late fall, they usually will feed in varying degrees until the ice arrives, making it a great time to target them.

I spent a good amount of time carp fishing last year in late fall and early winter. Last year’s unusually warm weather set up some spectacular late-season carp fishing. In the months of November and December, I landed more than 500 carp while fishing a number of locations in Rhode Island and Massachusetts. Most of these fish were in the 5- to 15-pound range, but some exceeded 20 pounds.

On December 8, with temperatures in the upper 50s—part of a string of warm days that served to increase the water temperatures and kick the carp into high gear—I was fishing a small, shallow river with light water flow (a key factor at this time of year). I had my usual late-fall bait setup, which includes a couple of pieces of sweet corn on the hair rig and a method ball (chum) of bait packed around my 1-ounce no-roll sinker.

The action was non-stop. My offering would hit the water and within 5 minutes, the rod tip would start banging and the line would zip off, causing my bait alarm to scream. Using two rods, I had many doubles that afternoon, creating chaos as I tried to land two fish simultaneously on two different outfits.

My total turned out to be 30 carp landed in an afternoon, of which 20 were mirror carp and 10 were common carp. Their sizes ranged from 3 to 15 pounds. It was the biggest haul I have ever experienced in a day of carp fishing.

It’s easy to get into carp fishing by using the same tackle you would use for light saltwater or heavy freshwater fishing. Saltwater striper gear, such as an 8- to 10-foot medium-action spinning rod with a heavy-duty spinning reel spooled with 15-pound-test monofilament, will easily get the job done.

Fishermen who target carp regularly often upgrade to 9- to 12-foot European-style carp rods that are sold at specialty stores like Big Carp Tackle. These are long and flexible rods built to cast heavy weights that are packed with bait. Most of the serious carp guys also use large bait-feeder spinning reels, which allow line to be pulled from the reel when the bail is closed. If you are using traditional spinning reels, you will have to crank the drag down to a low setting to allow line to come off the reel on the take. Never fish a traditional reel with the bail closed and a tight drag—even a small carp is capable of pulling the rod into the water.

Whatever gear you choose, the terminal setup will be the same. I like to fish sliding egg or no-roll sinkers that are an ounce or larger. (Note that there are restrictions on the use of lead sinkers under an ounce in most states.) My leader (called “hooklink” by serious carpers) is short, 4 to 6 inches long, and is made with 50-pound-test braided line. I use that short leader because I want the bait to be close to my chum circle, which will form as my chum or “method” disintegrates off the sinker. In most cases, I am using a small hook, usually a #8 short shank—an effective and inexpensive hook is an Umpqua Tiemco #2457. However, some fishermen prefer the expensive and super-sharp Euro carp hooks that can be purchased at specialty carp stores.

Carp tend to prefer “soft” baits in the colder water of late fall, which makes the bait choices less complicated than at other times of the year. My two main go-to baits in late fall are dough balls or sweet corn from a can. Some fishermen add a kernel of plastic artificial corn to their bait, which gives the offering some color and buoyancy.

There are many ways to fish a dough ball. I like to buy a loaf of white bread and prepare a bunch of dough balls at home or while I am sitting by the water waiting for a hit. I will pinch a small amount of the white part of the bread and knead it into a ball the size of a small marble. (It should be small, less than the diameter of a dime.) If you are going with a more traditional setup, just pack the dough ball around the hook so that it is secure and firm. I will make a mound of dough balls to fish with and a bunch to use as chum. I will use the bread’s crust in my method mix.

Since I am fishing European techniques most of the time, I use a hair rig, a basic method of carp-baiting in which the bait is put on a small section of looped line that comes off the hook. This is accomplished with a baiting needle and the bait is held in place with a plastic hair stop.

When fishing a dough ball on a hair rig, I like to harden it up before using it to make the bait more durable. After making the dough balls, I will set them out in the sun to harden and dry. Then, I stick the baiting needle into a dough ball and lock it in place on the hair rig with a plastic hair stop.

There is one more component to any kind of fall baiting—the method mix. This is a sticky mix of chum that packs around your sinker. I like to pack my method mix about the size of a golf ball. When in the water for a short period of time, the packed chum disintegrates off the sinker and the bait is left sitting right in the middle of a pile of food. It is one of the most effective fishing “tricks” that I have ever used.

To make my method mix, I get a container like a big plastic coffee can to hold the mix. I add about half a container of chopped-up bread and the fill the rest with old-fashioned oatmeal. I also add some cornmeal as an option. After adding about a handful or two of corn, I slowly add water and knead this mix. Be careful you don’t add too much water because the consistency should be a sticky snowball that will pack and hold together. If made correctly, it should hold together on the cast and slowly break down once it hits the water.

A “delicate” approach is often the best when fishing for late-fall carp. They are feeding, but sometimes not as voraciously as they do in the warmer months. For that reason, small leaders, small hooks, and softer baits tend to have more appeal and lead to greater catches.

In late fall, I have had my best success in shallow-water spots such as smaller ponds and slow-moving, small rivers. In these spots, the water tends to warm up quickly on sunny days, which stokes the carp’s activity level and leads to increased feeding. My 30-fish day described above came after a string of warm days, showing how weather plays an important role in late-fall fishing.

Time of the day can also be critical when fishing for late-fall carp. The warmest part of the day occurs in mid- to late afternoon, so that is prime time to fish in the colder months. Just that little uptick in water temperature can get the carp feeding, though the warmer the better when it comes to late-fall fishing. Sunny days are better than cold, cloudy days. Nighttime fishing usually slows after November 1, but it can quickly come to life during warm spells.

Over the years, there has often been an element of surprise to my late-fall carping. Last year, I hit those phenomenal numbers of fish in the last two months of the year, no doubt caused by the unusually warm weather. A couple of years ago, I went out in a late November snowstorm and landed many carp, including one beautiful specimen that was voted Big Carp Tackle’s Fish of the Month. But, several years ago, I got the shock of my fishing life on a warm and rainy early November day. While on a shallow pond in Rhode Island on November 10, I landed the largest fish ever caught in Rhode Island waters. It was a beast of a common carp that pulled my certified scale down to an even 36 pounds. That fish became the Carp Angler Group all-time record for Rhode Island. It never became the official state record because I would have had to kill it and bring it down to an official weigh station to get it entered. Instead, I released the fish after weighing it and having a witness confirm its weight.

After my striper fishing ends in November, I really look forward to carp fishing on a full-time basis until the ice arrives. In recent years, most ponds and rivers have remained ice-free until the end of December, so that gives me about five or six weeks of solid carp fishing. Most fishermen can’t imagine how good it can be.