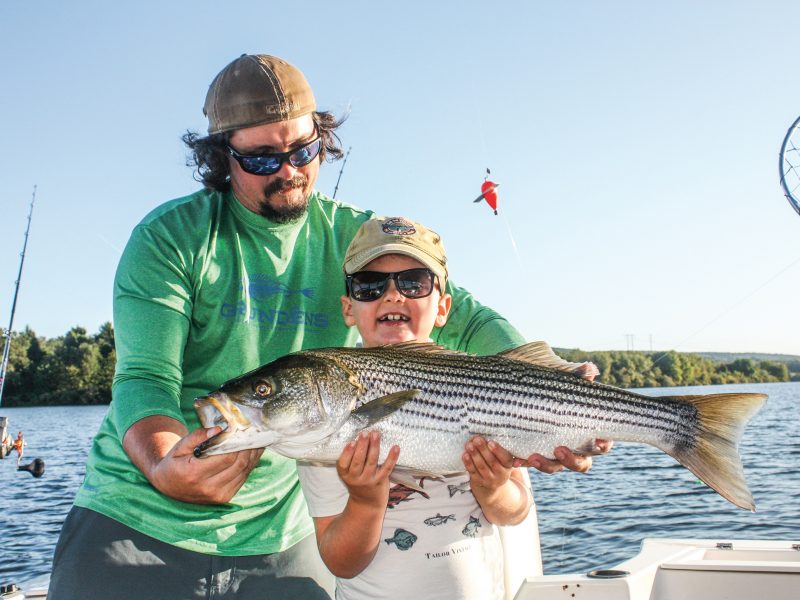 Growing up in Pennsylvania with no ocean in sight and a best friend whose need for stripers rivaled his need for oxygen meant that we were always headed out of state. Anywhere between Massachusetts and North Carolina was fair game for us. My memories of striper fishing from grade school through college consist of chasing those first reports of herring to the Jersey Shore in February when the temperatures were still in the single digits; living out of a truck on Island Beach State Park for days at a time; spending entire summer nights checking out every bridge between Ocean City and Cape May; making the long drive up to Montauk to traverse the lighthouse rocks in the fall; and even trekking down to the Outer Banks after Christmas. Somebody else I knew thought it would be a good idea to don wetsuits in the Cape Hatteras surf in the dead of winter. If only we had known about the striper fishery hiding right in our own backyards.

Submit your fish photos using the hashtag #OnTheWaterMagazine, or email them to feedback@onthewater.com.

Located about 90 minutes north of Philadelphia, Beltzville Lake is part of Beltzville State Park. The lake was created (and is maintained and operated) by the U.S. Army Corps of Engineers as a 3,600-acre flood-control project on Pohopoco Creek. The Department of Conservation and Natural Resources leases and manages the recreation on and around the lake.

In late August, I joined Steve Vinciguerra of Troll On Fishing Guide Service for a trip to Beltzville Lake. He has been fishing Beltzville for 10 years, and over that time, he has been able to dial in the techniques that work on the pure-strain striped bass stocked in the impoundment.

My son, Tyler, and I meet Steve at the Pine Run boat launch at 5:45 a.m., and by that time there were already several boats making their way to their favorite striper spots on the lake. After a 5-minute ride, we arrived at our desired location and Steve explained the plan for the day.

There are several different techniques that fisherman use to effectively target stripers on Beltzville, and it all comes down to preference. Trolling is one of the more popular methods, but it can be tricky. Pennsylvania state law does not allow an angler to have more than 3 hooks on a single line, so trolling a traditional umbrella rig is problematic. Some fishermen troll deep-diving plugs like the Mann’s Stretch 25, or even Mojo Rigs, but rocky bottom and drastic depth changes will quickly claim lures if fishermen don’t pay attention to where they are trolling.

Time of year also factors into which approach is most productive. When we reached our destination, the fish finder read a surface temperature of 76 degrees, and Steve explained that during the summer months when the temperatures are higher, the fish tend to hang deeper. They straddle the thermocline and make it difficult to reach them with deep-diving plugs that drop 25-to-35 feet down, forcing fishermen to use downriggers to reach the fish on the troll. Once the water begins to cool in the fall, the stripers spread out through the lake and can be more easily caught casting lures or trolling.

Our approach for the day was drifting with live bait. Steve’s bait of choice was the alewife, which was introduced to the lake years ago. These fish flourished and are the primary forage for stripers here. Other anglers may live-line trout and bluegill, but Steve believes the alewives works best because their silver reflection gets the attention of stripers from a distance.

We retrieved six alewives from the livewell and set them at varying depths. The rigs were simple, consisting of a 1/0 octopus-style hook attached to 5 feet of 15-pound-test leader material with a 1-to-2-ounce egg sinker above the barrel swivel attaching the leader to the monofilament main line. The 15-pound leader was ideal with the alewives we were using, but when using larger baits like live trout, most fishermen use up to 25-pound-test leaders. Years ago, the state stocked Beltzville with trout, but discontinued it when they learned the stocked trout were being annihilated by schools of stripers waiting to ambush them at the boat ramps around the lake.

Over the first 2 hours of fishing, we marked several fish on the fishfinder, but none showed any interest in our offerings. At about 8 a.m., the first clicker went off on one of the reels and seconds later, Tyler was battling his first Beltzville Lake striper. After several minutes, we saw the color of a fish that I’m not accustomed to seeing while freshwater fishing in my home state. We got the 30-inch striper boatside, and quickly released him. Steve explained that with the water temperature that day, releasing the fish without bringing it out of the water was important. My son was eager to bring one of the stripers home for dinner, but we decided to wait for a bigger one.

We didn’t have long to wait. As soon as that first striper swam out of sight, the drag on another reel started screaming. We looked at the depth finder and it was lit up with marks from 40-to-100 feet down. After a few minutes, we were staring at a 33-inch striper in the net. We’d found the massive school of stripers Steve was looking for, and he used his trolling motor to keep us in position over the ledge where the fish were hanging. We immediately sent down fresh baits and, within a minute, were battling again. This fish looked like the twin of the 33-incher we’d caught earlier.

After resetting our baits, we waited 5 minutes until another rod went off. This fish didn’t come to boat without a fight, however, and it swam toward the bow to wrap the trolling motor in a clever escape attempt. With some teamwork, we were able to avert the crisis and released the 32-inch striper so that he might grow into a 40-pounder one day. Steve’s largest striper from Beltzville was a 37-incher, but he knows of fishermen who have caught 30-and even 40-pounders from the lake.

As he was telling me this, 100 yards away, the water began to erupt into a scene more fitting for the Atlantic Ocean than a freshwater lake in Northern Pennsylvania. Hundreds of stripers began pushing a school of alewives to the surface and the blitz was on! The only thing missing were the hundreds of laughing gulls, terns, and gannets that usually accompany it.

By the time we reeled up the lines and motored over the school, the action had died, and the fish disappeared. They reappeared 50 yards away, crashing the surface again, gorging on alewives, but our attempt to intercept them ended the same way— with the fish disappearing before we got off a cast. This repeated itself four more times over the next half hour, all with the same result. Steve said such blitzes are a regular occurrence on the lake, but during the summer months when the surface temperature is warm, the stripers feed briefly at the surface before they can no longer tolerate the warm temperatures. In late September and October when the water is cooler, these blitzes can last 10-to-15 minutes.

While the lake has no tides, there are periodic water releases from the dam. Apparently, there is no warning about when water is going to be released from the dam, but some of the biggest blitzes on Beltzville have coincided with these releases, so the striper’s innate attraction to moving water shows itself in these landlocked fish.

In the spring, the stripers still try to ascend the smaller creeks feeding the lake to spawn. Striped bass eggs and newly hatched larvae require enough current to remain suspended in the water column; otherwise, they settle to the bottom and are smothered by sediment. Beltzville lacks the conditions necessary for successful spawning so the population is maintained by the state’s stocking program.

Over the next 30 minutes, we tried unsuccessfully to tempt another striper with our live alewives. However, with two fish in the box and several others released, we decided to head for the dock. We hadn’t even arrived back at the dock yet and my son was already asking me when we could come back again. I had to cast aside my instinctive thought that we would have to wait until October when the fall striper run passed through New Jersey again, and replied “Anytime you want, buddy. These fish are right in our backyard and never leave.”

Pennsylvania regulations for inland waters— which exclude the Delaware River—allow anglers to keep two stripers over 20-inches per day, but with two fish on ice, we decided to release anything else that we caught that day.