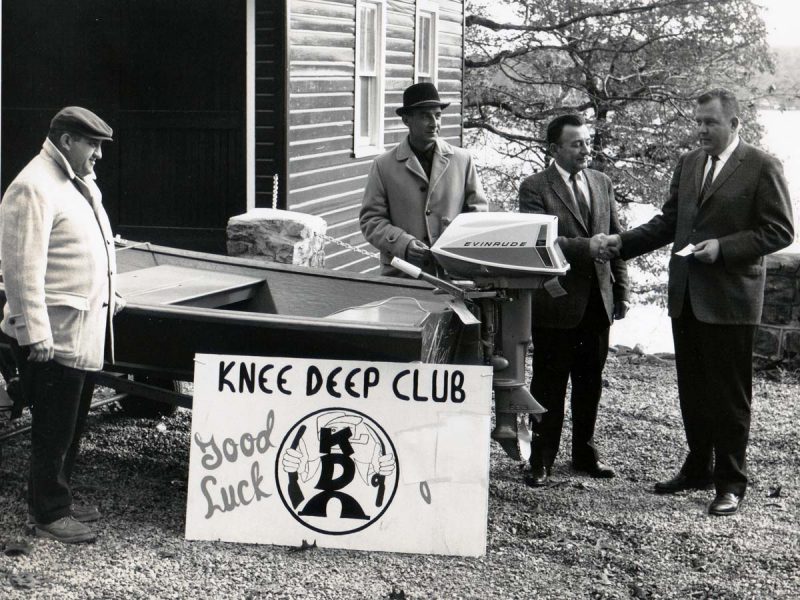 Pictured above: Knee Deep Club members show off the grand prize from their annual raffle (circa 1960)

My relationship with Lake Hopatcong began more than 20 years ago. While driving to one of my favorite ponds in Sussex County, I took a detour. Instead of following Route 15 North, I made my way to Nolan’s Point Road and finally to Dow’s Boat Rentals where I met Laurie Murphy, proprietor of Dow’s and arguably the most popular person on the lake. I purchased a couple dozen herring, rented a boat, and set out on what—at the time—seemed like a monstrosity of a lake.

Compared to our local ponds—waters that are fishable from shore or with a 10-foot jon boat and electric motor—Lake Hopatcong was like nothing I’d ever seen. Each section of the large lake had a name: Chestnut Point, Pickerel Point, Nolan’s Point. I fished several hours with nothing to show for it, but still left the lake that day filled with a burning and lasting curiosity.

I spent the next decade trying to figure out how to fish Lake Hopatcong. Every time I thought I had learned something, I was left scratching my head. One day, as I was coming off the water after another humiliating defeat, I met Lou Marcucci, a longtime member of the Knee Deep Club and a familiar face on the lake. Lou spent a half-hour on the dock at Dow’s teaching me how to double-anchor, how to rig a slip bobber, and how to rig a “down rod.” He then grabbed a map from inside Dow’s and showed me different locations to try, and told me not to fish too deep because of low oxygen content in the summer. The next time I fished the lake, I employed his wisdom, and my wife caught a 6-pound walleye because of his good advice.

Lou’s knowledge, patience and willingness to teach the next generation of fishermen is what I have since learned is the heart and soul of the Knee Deep Club. With a history that goes back more than a half a century, the members of this club carry on a tradition of improving fishing opportunities, preserving lake habitat, and passing fishing knowledge from generation to generation. There is no question that the fishery in Lake Hopatcong would not be what is today without the Knee Deep Club.

A Beginning and a Name

The Knee Deep Hunting and Fishing Club dates back to 1946. At that time, the New York Yankees had won only 10 of their 27 World Series championships, and the last eight New Jersey governors had yet to be born. The club was officially incorporated three years later in 1949.

There’s been no shortage of speculation over the years as to how the club acquired its name. Even the New York Times chimed in, purporting the name meant that all fishermen are knee deep in B.S., referring to fish stories of questionable veracity. While there may be some truth in the statement, that’s not where the Knee Deep Club took its name. The true story is that prior to the first official meeting, the founding members discussed the club’s formation at John Dugan’s house. As they were talking on the porch during one of the gatherings, John’s wife Peg unknowingly uttered the phrase that lives on 70 years later. While coming inside from the porch, she was asked by one of the other wives what the boys were up to. Peg replied, “I don’t know, but they’re knee deep in something.” The term “knee deep” stuck. Also surviving the test of time is the club’s official emblem, designed by Joseph Pauls in 1947.

The club grew quickly, and in 1947 had 279 paid members. The club’s early stocking efforts included rabbits and pheasants, but almost immediately shifted to stocking fish only. The Knee Deep Club began lobbying the state and federal government on Lake Hopatcong’s behalf, and their efforts were rewarded. The club secured 4,050 largemouth bass from the state in 1947, and another 9,900 the year after. Federal fisheries responded with 1,000 smallmouth bass in 1947.

During the early years, the club started several programs that are still carried on today. Some of these are the monthly meetings with guest speakers, the Yearlong Contest, the Junior Derby, and the Official Weigh Station. In 1949, the club helped organize the now-legendary Lake Hopatcong Fourth of July fireworks display.

Today’s anglers have the Knee Deep Club to thank for the vast array of fishing opportunities in Lake Hopatcong. No other body of water in New Jersey has an abundance and diversity of species quite like it. Trout stocking began in 1952, when the club entered into an agreement with the Division of Fish and Game. (This agreement set guidelines that stand to the present day.) The club used its own funds to purchase trout, with the state at least matching the club’s purchase. The club monitored the results of the program and stocking numbers continued to climb.

Around the same time, the club began lobbying the state for a walleye stocking program. The initial stocking effort was short-lived due to evidence of high mortality. However, in the following years, smaller walleye began to appear, indicating that some of the original fish not only survived but successfully spawned. As time passed, walleye between 4 and 8 pounds continued to be hooked, and in 1962, Bill Goldwick caught a historical club-record walleye of 11 pounds, 4 ounces through the ice. Stocking efforts resumed, and Lake Hopatcong’s walleye fishery has become one of the most successful programs in the state.

Joint efforts by the state and the Knee Deep Club have resulted in the establishment of several new fisheries as well as strengthening existing ones. The hybrid striped bass program is one of the most successful in the state. Healthy populations of tiger muskellunge and true-strain muskellunge have been established, and Lake Hopatcong is now a premier muskie destination in the Northeast. Channel catfish have been re-established, and fish pushing 20 pounds are caught every year. Walleye and trout continue to be stocked annually, the lake’s panfish population is plentiful, and the ever-present landlocked herring keep everything fed.

From the earliest days of the club, a Junior Division was established, followed by a Junior Derby. While limited to club members at first, the Junior Derby opened to the public and moved from Lake Hopatcong to Memorial Pond in Mount Arlington. In 1975, with the help of the Easter Seals Foundation, the Knee Deep Club held its first Special Needs Outing. These wonderful events continue today, and are held annually on a Saturday in June. Volunteers from the club show up in huge numbers for support.

A quick peek at the Knee Deep Club website will show the “Kid’s Corner,” Junior Standings and pictures of the annual Junior trophy presentation, by far the most important and well-attended meeting of the year. These traditions are engrained in the tenets of the club, and have remained a key focus for more than 70 years.

Fishing contests remain another important focus of the Knee Deep Club. From January to October, monthly contests cover everything from ice fishing to catching pickerel, trout, hybrid stripers, and walleye. Every contest is open to the public, and the prizes can be substantial. The Knee Deep contests remain some of the most popular fishing events in the state.

Past, Present and Future

The Knee Deep Club has continued its traditions through the years and shows no signs of slowing down. A full calendar of contests has been set for 2018 and weekly meetings (including the Junior Awards night) are slated.

One of the more recent Knee Deep initiatives are the “Water Scouts,” who survey the lake for invasive water chestnuts. The project, spearheaded by former President Tim Clancy, has succeeded in removing these invasive plants before they can take hold. (The water chestnut has completely overgrown several bodies of water in New Jersey, including Lake Musconetcong, which is just downstream from Hopatcong.)

The Knee Deep Club keeps in close contact with state and local officials, voicing opinions and lobbying for laws and legislation that protect fishermen’s rights and the health of the lake. And of course, there’s the fish. In 2017, the state stocked the lake with nearly 10,000 trout, in addition to the fish purchased and stocked by the Knee Deep Club. Also in 2017, the lake received more than 65,000 walleyes, 27,133 hybrid stripers, close to 125,000 channel catfish, 30,000 largemouth bass, and 365 true-strain muskies, with 3000 holdovers scheduled for spring 2018.

For almost 75 years, the members of Knee Deep Club have been watchful stewards and active participants in the success of Lake Hopatcong and its fisheries. The philanthropy and generosity of this club has had a lasting impact, and with its primary focus of passing the love of fishing down from generation to generation, both the Knee Deep Club and Lake Hopatcong have a bright future.