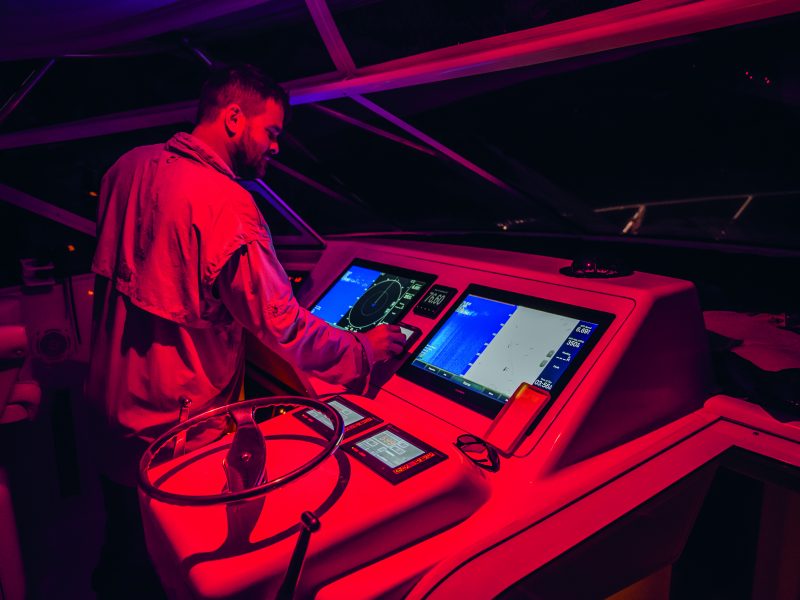 You are out on the water on a spectacular summer day. The wind is calm, the sky is blue, and there are only a few clouds in sight. You’ve had a great morning of fishing and decide to head to your favorite destination for lunch and a drink. The harbor is packed, so you raft up to one of your buddies on a mooring. You go onshore and everyone is in a great mood. The town is hopping and it’s a great early summer afternoon.

An hour later, you look to the west and see towering white clouds in the distance. It’s still warm and windless, but you can see a front coming. What’s your plan?


This happened to me last June at Oak Bluffs on Martha’s Vineyard. My reaction was to look at weather radar on my cellphone, then immediately pay the bill and get my wife and I back to the boat. A line of thunderstorms 60 miles to the northwest were moving southeast. We took the launch out to the mooring and immediately started the complex process of sliding off the mooring with one boat on either side of us. It took 20 minutes to safely disengage. We left the harbor and found calm seas and a gentle breeze. My wife wanted to fish a bit more, so we stopped at a rip halfway to the dock.

There was a gentle westerly breeze, but dark clouds loomed to our west. My cellphone and SiriusXM Marine weather showed incoming thunderstorms. I pulled the plug on fishing and we returned to the dock, where we tied up in our slip. Thirty minutes later, all hell broke loose—tropical downpours, waterspouts, thunder, and lightning. We watched from the safety of our slip as dozens of boats raced into the harbor and lined up in circles at the boat ramp. Wind was blowing the tops of the waves square, and lightning was firing all around us.

I have been caught on the water as well as on a mooring in conditions like these more than once. In this situation, keeping a watch allowed us to be safe and secure.

Things that Pass in the Night

My next anecdote about the importance of keeping a watch (as well as learning from mistakes) was 100 miles offshore earlier this summer. We were the only boat 12 miles east of a crowd in Block Canyon on a clear night. I had the radar set at 2 miles, and there were three experienced crew on board. When I am on watch, I always run a radar scan out to 16 miles every hour or so, looking for large ships. I got up at 11 p.m. when we had a fish on and asked the crew if I could get another couple hours of sleep. They said yes, so I ran a scan out to 24 miles, then went back to sleep. I woke up at 2 a.m. with the boat moving, rolled out of bed, and asked, “Fish?”

“No, it’s a ship!” was the answer. I got up on deck to see a large set of lights high above us passing close astern. Radar showed the ship at ¾ mile and moving at 15 knots.

What happened was that the person on deck was fishing hard, focused to stern. He had done a visual scan and checked the radar within the past half hour. It was a clear, calm night and we were alone, so his guard was down. I contacted the ship by radio, and their watch-stander had in fact seen us at 5 miles and altered course 2 points to starboard to pass ½-mile to our stern. One-half mile may sound like a good distance, but when it’s an 800-foot car carrier 12 stories high moving at 16 knots, it’s frighteningly close.

Ships at sea cover a lot of distance quickly. At 16 knots, a ship covers 8 miles in 30 minutes. A proper watch would have identified the potential problem and given us time to move, with less excitement and drama. Note the international navigational rules clearly spell this out:

§83.05 Look-out (Rule 5)
Every vessel shall at all times maintain a proper look-out by sight and hearing as well as by all available means appropriate in the prevailing circumstances and conditions so as to make a full appraisal of the situation and of the risk of collision.

I want to broaden this discussion on watch-standing to boating in restricted waters in poor visibility, notably fog. Ferries and other large vessels operate in narrow channels and can be constrained by draft or restricted in maneuverability as defined in the navigation rules.

Rule 3
The term “vessel constrained by her draft” means a power-driven vessel which because of her draft in relation to the available depth and width of navigable water is severely restricted in her ability to deviate from the course she is following.

In addition to the commonsense rule that the bigger boat has right of way, the navigational rules state that in order of precedence, both restricted maneuverability and vessels constrained by draft have the right of way over either a power boat or a sailboat.

Every summer I hear the same complaints about the Martha’s Vineyard ferry:
“He almost ran me down in the fog!”

“I had right of way, and he did not change course!”

And so on. If you have ever been on the bridge of a large boat, you will notice the professionalism and attention to detail. Orders are given and repeated, and a radar watch and visual watch are kept at all times. A log is kept of course changes, the radio is constantly used between other ferries and commercial vessels, and closing situations are discussed in advance of them becoming problems.

If you look at a detail chart of a shipping or ferry channel, you will see channels marked with dotted lines for safe passage. These are courses that a ship or ferry must take in order not to run aground. The fact of the matter is that a ferry or other large boat often has right of way over you due to depth restrictions; they cannot always alter course, nor can they come to an immediate stop in a closing situation. As a mariner, it’s incumbent on you to be aware of situations where a larger boat is restricted in its ability to maneuver or constrained by depth and give them space. Add in limited visibility from fog or low light, and the danger doubles. Just as you don’t want to see a ferry looming out of a fog bank, they don’t want to pass within 100 yards of you in a restricted passage.

How does keeping a watch fit here? Very simply – while boating, you must be situationally aware and increase your focus and attention in tight waters. I constantly pass the Woods Hole to Martha’s Vineyard ferry lanes as part of longer voyages. I always have a second pair of eyes either visually assessing a closing situation or helping me with the radar picture. In fog, even with my radar, I assign a crew member eyeball and airhorn duty. That job is to keep a watch for targets I see on radar and sound a fog signal every 2 minutes as required in the Navigational Rules.

When crossing those lanes, I use both my radar and my crew’s eyes and ears to assess and react to a closing situation. When in doubt, I alter course and aim behind a ferry while I am a mile away. There are no style points for barely clearing a ferry’s bow by a few hundred yards. It’s better to be safe, add a minute to your journey. and avoid close quarters with a large vessel.

Keep a Watch While Fishing

We all fish in congested waters at times. Often, the best fishing is near channels, passages, points, and coves that have heavy boat traffic. As long as I have been boating and fishing, I can remember close confrontations and near-collisions that didn’t have to happen had I been keeping a proper watch.

Thirty years ago, I used to drift channel entrances to large estuaries as I fly-fished for stripers. I was young and dumb, and believed I had right of way because I was fishing. Periodically, I had to scramble as a large boat held to the channel and made me move in a hurry to get out of its way. More than once, I was waked by a large boat leaving the jetties and powering up, tossing my 15-foot Whaler like a cork. In hindsight, almost all of these encounters and problems were due to me not keeping a close watch on the boating traffic because I was so focused on fishing.

Twenty-five years ago, when I was still relatively inexperienced as a boater, I used to anchor up in front of the Middle Ground Rip a mile north of Martha’s Vineyard to fly-fish for stripers. I positioned my boat a fly cast from the rip in 3-knot currents. Once anchored, I was there for the bulk of the tide. That in itself was stupid and dangerous.

One calm day, I was pinned just south of the rip as the Katama, the Vineyard truck ferry, steamed by a mile out. On the very calm day, her wake was visible rolling inward, but so what? I found out when that wake amplified the height of the rip and pushed it 10 yards closer to me. Suddenly the rip was piling into the stern of my open-transom Mako. The boat was awash with a foot of water on the deck. I had never been so scared as a boater. I started the engine, cut the anchor line, and motored forward to get water out the boat. Again, completely my fault for not keeping a watch on the water.

Here’s a final story from my small boat days. Back in the ‘80s, you could sight-cast to large bluefish on local flats in 3 feet of water, and it was great fun in a small boat. I would head out from my mooring at dawn and scream 10 miles to the east, usually on flat-calm seas, fish for 2 to 3 hours, and head back. By then, I had at least some notion of the effects of an afternoon southwest breeze, so I planned to head home by 8 or 9 a.m. One day on the flats, the wind started to pick up, so I pulled the plug and headed home into a dark sky. As I headed west, the sky turned darker and the rumble of thunder started. Instead of doing the right thing and diverting course to a local harbor, I kept running for home, directly into a lightning storm. I’m here to tell the story, but keeping a proper weather watch would have led to a lot less drama.

Boating and fishing is supposed to be a fun, relaxing activity. As a recreational boater, you don’t need to concern yourself with all the formalities of being a professional mariner. By no means am I suggesting that you institute watch procedures on a 21-foot center console. I do, however, recommend that you always keep an eye on weather and sea conditions, and be situationally aware of boat traffic in your immediate vicinity as well as anticipated traffic in your course. The stories I have recounted of boating mistakes I made almost all boil down to the same root cause: not keeping an eye seaward amd not being aware of conditions around me. Remember the adage, You are a mariner first and a fisherman second!