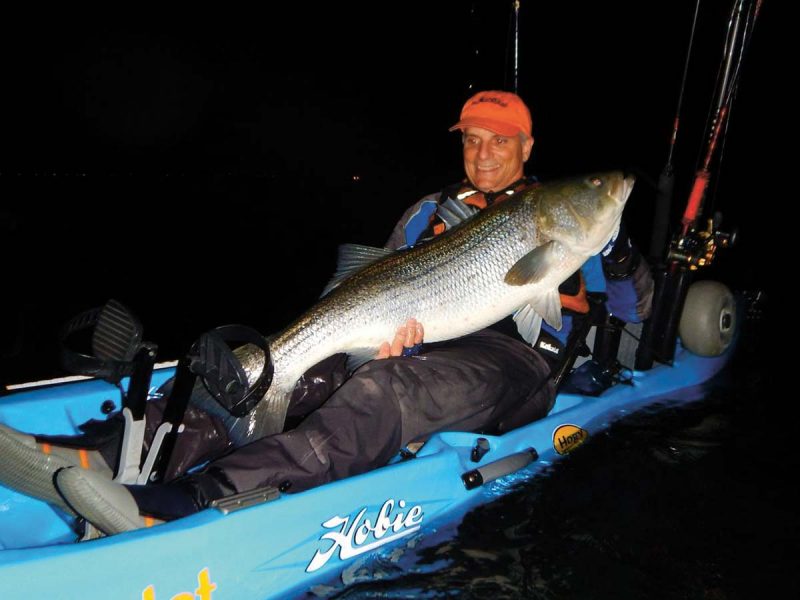 Pictured above: Kayaks can reach shallow rocks and reefs where big bass feed at night. photo provided by Eric Harrison

With my kayak in tow, I arrived at the point where blacktop meets sand and saw the water glistening underneath the glow of the full moon. A soft, warm summer breeze filled the air, and the rhythmic lapping of waves was the only sound I could hear. Every piece of the puzzle seemed to be in place: tide cycle, moon phase, and the weather – they all matched the conditions that have proven successful in the past.

I reached my destination, an area of rocky structure where baitfish funnel through with the tide and started making casts over the structure. As the current began to build, a pause in my retrieve brought the distinct thump of a striped bass and a solid hookset. With a sudden peal of the drag, the kayak turned with the force of the fish trying to escape.

As memorable as the strike of a big striped bass and its initial runs are, landing a sizable fish from the low vantage point of a kayak is also a big reward. I subdued the tired bass by grasping its lower lip, struggling to maintain a grip on its oversized mouth. When I slid the fish over the gunwale of the kayak, it filled my lap with its enormous body, its head draped over one side of the kayak and tail over the other. After a quick snapshot, I slid the fish back into the water and begin reviving it, holding it by its lower jaw and slowly pedaling so water passed through its gills. When it clamped down on my thumb, I knew it was ready to go. With a powerful splash of its tail, it swam off into the depths, becoming another memory of a summer night fishing for striped bass in the dark of night.

Shallow reefs and rocky structures are prime locations to catch large striped bass, especially at night. Under the cover of darkness, large striped bass venture into shallow waters to feed, and a kayak is the perfect platform to access and fish these habitats. It allows a quiet approach and provides access to shallow, rocky areas that cannot be safely accessed by a larger boat. This is not to say that kayakers cannot catch big striped bass during daylight hours, but the chances of hooking into a cow striper increase at night, especially in shallow coastal areas.

There are three primary fishing methods that I use when targeting striped bass in currents that form over rocky structure: casting, trolling, and three-way jigging. Which method I choose depends on depth, current, and the bait I’m using.

Generally, when casting into current and at structure, I prefer using live eels and soft-plastic baits, either unweighted or fitted with jigheads. When trolling, I almost exclusively use live or dead eels. Dead eels have a nice action at a slow troll, and you can add in a twitch followed by a pause to invoke strikes. They are also much easier to manage in a kayak and easier to control once in the water. For fishing deep reefs, I again prefer eels, but other bait species, including menhaden, can be very effective.

Casting is my preferred technique for fishing boulder fields and shallow reefs with water depths less than 12 feet. Identifying holding spots for stripers, such as drop-offs, pockets, and boulders is important for knowing where to cast and retrieve. Using GPS and sonar mounted to my kayak, I like to drift over the structure to seek out these holding zones. The ability to get into position and present the bait effectively in these areas is where a kayak excels. The best approach to reach these holding zones is to set up just down-current from the structure and cast up-current. A pedal-drive kayak makes the task of setting up and casting into current much more efficient. By pedaling and matching the speed of the oncoming current, it allows you to maintain position while casting and retrieving.

When trying to locate stripers among large boulder fields and long reefs, trolling is most effective for covering water and locating fish. Slow-trolling live bait is one of my favorite ways to catch stripers from a kayak. Using my Hobie Outback, I can maintain a slow, consistent speed while holding the rod, perhaps adding small twitches and letting the bait speed up and slow down.

I’ve found a circle hook is best for trolling live bait from a kayak because of the awkward position required to set a traditional J-hook. When a fish strikes the bait a distance behind the kayak, simply reeling tight to the fish is enough to engage a circle hook. Using the weight of the hooked fish, you can turn the kayak and face the fish by tightening up the drag and leveraging your body around the rod.

The most important thing to remember when trolling from a kayak is to maintain the proper depth, which can be done by altering the amount of line out or the trolling speed. Often, the biggest striped bass lie in wait along the bottom, making it necessary to get the bait down to their holding depth. While trolling at a steady speed, usually 1 to 1.5 knots, I will throw the bait back behind and let line out incrementally until it hits bottom, then reel up a couple turns. Presenting the bait at the correct depth is important for success and a kayak makes this more achievable with its ability to finely adjust position and speed.

Fishing deeper reefs from a kayak can produce some exceptional striped bass. Reefs within a few miles of shore can often be accessed by kayak if you are mindful of the tides and currents. The best way to target these fish-harboring structures is by drifting over the top with the current. Fish generally sit on the down-current side of a reef, so keeping the bait close to the bottom while drifting across the drop-off is essential. This zone is usually quite small, so the maneuverability of a kayak allows you to key in on the drift and quickly reset once past the productive zone.

When fighting a fish along a reef, it will often attempt to hold position along bottom and behind rocks, so pulling it up and away as quickly as possible will reduce the number of break-offs. A pedal kayak can be used as a tool to work the fish away from the structure and into open water, greatly increasing the chances of landing a large fish.

An ideal casting rod setup for kayak fishing in current and around structure is a 7- to 8-foot medium-heavy rod with a 5000 to 8000 series reel, spooled with 50-pound-test braided line and topped with a 4-foot length of 50-pound-test fluorocarbon leader. A setup of this magnitude is necessary to pry a heavy bass from behind boulders and structure and still have enough rod length to reach around the bow as a fish gets close to the kayak. Some prefer saltwater bait-casting reels that provide enough line capacity and drag weight to subdue a heavy striped bass.

When dropping bait down and three-waying over reefs, a stouter rod is generally preferred. A conventional reel paired with a 6- to 7-foot medium-heavy powered rod is necessary in this scenario.

When fighting a striped bass, it often swims straight toward rocky structure. A large fish can easily turn and tow a kayak, so stopping the fish from reaching structure can make or break landing a trophy striped bass. This can be done by turning away from the direction of the running fish and paddling or pedaling hard toward open water. I typically keep the drag on the light side until hooking a fish and then tighten down, depending on its size. A tight drag coupled with a sudden strike can flip a kayak, so it is important to be aware of your drag setting. That said, one of the best advantages of kayak fishing is the ability to follow the fish and use the resistance of the kayak through the water to wear it out. Once headed in a clear direction, a balance between drag and resistance of the kayak will tire a large fish out in no time.

I must add that kayak fishing the environments discussed in this article can be dangerous and requires some common sense as well as safety precautions. A personal flotation device (PFD) is imperative because a flipped kayak in open ocean could be deadly. Second, boaters may have trouble seeing a kayak in open water, even on a bright sunny day, never mind in the dark of night. Take along a bright flag for day and white 360-degree light for night. A handheld VHF radio is also a good device to have when kayaking in the ocean so that you can communicate with buddies and call for assistance or rescue in an emergency. A noisemaking device, as simple as a whistle or air horn, is a must.

Being aware of the weather and tides is crucial before heading out on the water. Full and new moon tide cycles can be some of the best times to catch a cow striper, but with these moons comes stronger than normal currents. (That’s the reason big bass will be on the prowl.) Getting familiar with the tides and currents at your fishing spots is important when fishing from kayak, for both fishing success and safety’s sake.