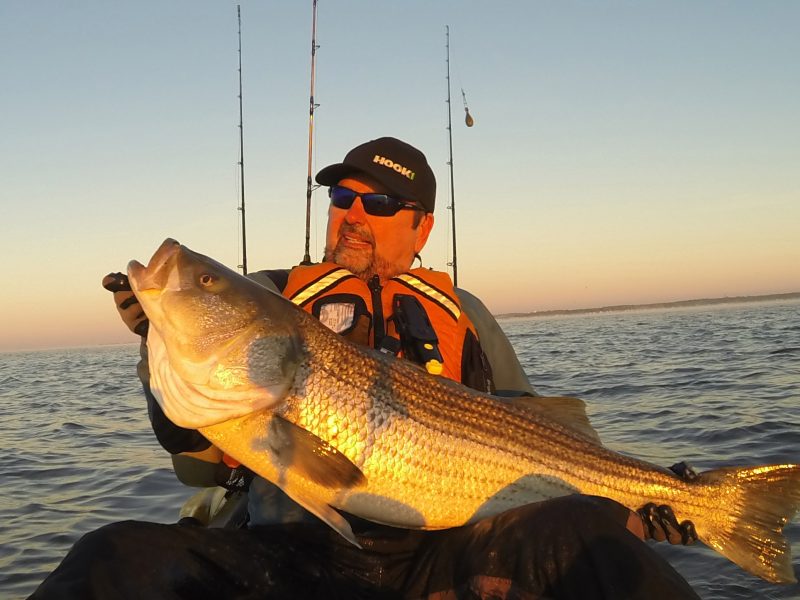 In my shore-fishing days, October was often the most frustrating month. Fishing was wide open one night, and the next night the spot would be dead because the fish had moved on. I always wanted a way to be more mobile on those quiet nights, to be able to hit more spots in search of the schools of migrating bass. Of course, come late fall, kayak fishing became my choice for mobility!

Depending on where you live in New England, striped bass change their behavior sometime in late September or early October. They are no longer stuck on structure and are now roaming, moving south and chasing schools of bait.

I spend most of my season chasing bass on structure or in rips, spots where the local bass come to feed on a regular and predictable basis based on tides and time of day (or night). In many of these spots, I find bass feeding on crabs and lobsters, especially at night. Big plastics slowly bumped along the bottom are regular producers for these fish. But as the fish prepare to migrate, they seem to be less keyed in on crustaceans and are looking for something along the lines of fresh fish.

Late in the season, the young-of-the-year baitfish are usually big enough to eat, especially juvenile herring dumping out of rivers, and big baits like pogies and mackerel usually make an appearance too. The density of the bait and the higher quality food refocus the bass on fattening up for their journey south.

Fortunately, as kayakers we are well prepared to respond to this seasonal change; we aren’t stuck on shore and can get out and chase the fish day and night. We often associate the fall run with big daytime feeds, but in the last few years in many areas, that hasn’t happened. The night bite has often been more consistent than the day bite, but seldom have the wide open blitzes occurred during the day in the areas I fish. In October, it pays to get out day and night and those early morning trips that start in the dark and end well after the sun rises provide a great opportunity to fish a few different styles.

I’m a pretty die-hard soft-plastic bait guy from the kayak because I prefer to catch bass on the single hook of a jighead and not have a bass with a mouthful of trebles on my lap. But October is a time to fish a variety of lures.

My summertime go-to lure at night is a 13-inch black or dark-colored soft-plastic like the Jiggn’ Hogy on a jighead, and on October nights, I usually rig at least one rod with this lure. The difference is in the presentation. Come October I’m much less focused on bottom bouncing and much more focused on speed swimming that lure through areas of current. I use a much faster retrieve as these fish aren’t grubbing on the bottom anymore and are looking for a bait that speeds away from them. This time of year, even inactive fish are often willing to jump on a fast-moving bait, just as a well fed cat is only interested in chasing a mouse that runs away.

I also keep a variety of light-colored plastics, usually in the 7- to 10-inch range, rigged on jigheads up to one ounce. These sizes are great for throwing at breaking fish. Smaller jigheads work well speeding along the surface, and the heavier heads are great for letting the bait drop below the school. Fishing beneath and down current from breaking fish is a great way to find larger fish, even on days when it appears that only small fish are around.

My tackle box is also filled with a few other lures specifically to target bass and blues focused on bait fish. October is a great month to use surface lures and needlefish plugs. These types of lures are excellent baitfish imitators and call fish in from a distance. They also cast well and allow you to cover more water when looking for fish. When you need a search lure, it is tough to beat trolling a Bomber or Rapala, and you can’t troll too quickly in your kayak – a bass or blue usually has no problem catching a lure at your top speed. For larger fish I also like to throw a big West Coast metal swimmer, the Tady 45. This is a lure that swims at a modest pace and has a great kick that calls in the big fish. It is especially effective around breaking fish. Anyone who has fished party boats in California knows the thrill of watching fish eat a Tady as it cruises just under the surface. Your tackle box should be stocked with a selection of lures that provide some casting distance and are good baitfish imitations; it helps to have a selection that will allow you to fish both on top and under breaking fish.

With fish less focused on structure, you may have to develop a new array of spots to fish. At night, I like to focus on rips and I seldom find fish in October in areas without current. Many spots with current and structure will serve as staging areas where fish gather overnight as they wait for first light and the opportunity to go looking for schools of baitfish. These fish are often very catchable, especially if the occasional school of bait rolls through. I have been on inactive fish that suddenly erupted in the dark as a school of baitfish wandered where they shouldn’t have. Lights on the water are also great attractors at night, bringing in schools of baitfish, often with bass on their edges. In general the fish under the lights are smaller, but they can often provide action on an otherwise fruitless night. I usually set up a milk run of spots going from areas with lights to areas with current and revisiting the lights if I don’t find fish.

Daytime fall fishing is usually focused on finding breaking fish, and October can be the best month for surface activity. Areas with strong currents and rivers that dump out fresh herring are great places to focus on at sunrise. The dawn bite can be excellent, even without breaking fish; bass and blues will often roam these areas looking for schools of bait, and trolling a lure can be a great way to intercept them. Boaters can make fishing breaking schools a challenge by running over fish and putting them down, but if you stick to the areas where the fish are showing and work them even when the fish aren’t breaking, you may find that you can out fish the run and gunners. Plus staying on the spot can make it easier for you to beat the boats to the fish if they pop up nearby.

If you have more than one kayak in your fleet, October is the month to fish your faster boats. Pedals are a definite advantage over paddles for chasing after breaking fish because you can cast at the fish as you give chase. Pedals are also quite helpful when the fish are in the faster water!

October is a month often celebrated for big bass, but in many areas the big bass clear out. Don’t forget to bring some light tackle with you. In most of New England, this is our last month of good striper fishing for quite a while, so take your time and enjoy every fish no matter what the size.

Many kayakers stash their yaks as the weather cools off, but those that do can miss out on a fun time of year. October requires a bit more insulation and a dry suit is nice to have on the colder nights. Dressing well and wearing your PFD will keep you safe on the water, but use your common sense, too. The weather is often iffy and sometimes deciding not to go is the best thing to do.

There isn’t much time left for kayaking this season so get out and enjoy it while you can. October doesn’t have to be the end of the season, and next month we will talk about how to get in a few more trips to make that off season just a little bit shorter.