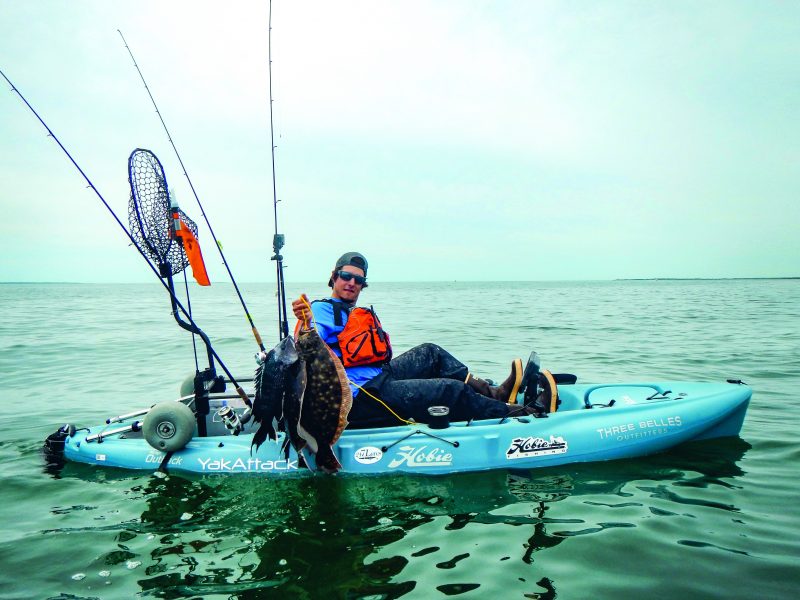 One of my favorite ways to spend a hot summer day is by floating around on a plastic hull, bouncing a jig off the bottom for fluke. These fish can be found in a variety of locations along the coast during the summer months, and though most fishermen catch them from boats, I prefer to fluke fish from my kayak. Targeting fluke on a kayak is not only fun but very effective. While boaters travel long distances to popular offshore locations in search of fluke, kayaks provide a unique advantage and access to fluke fishing that can be as good or better, right near shore.

Near shore, fluke will relate closely to subtle structures, such as small depressions in the bottom, channel edges, and even isolated rocks. Many of these structures can be difficult to effectively fish from a boat, but the agility of a kayak allows fishermen to precisely target the smaller hotspots to catch fluke that most boaters motor past.

While fluke fishing from any type of kayak can be productive, there are additional benefits when using a pedal-driven kayak. The hands-free propulsion and steering via rudder control makes a drastic difference in drift control and bait presentation while targeting fluke.

Finding Fluke Spots in the Kayak

Fluke are ambush predators, and will wait on the bottom near structure, for prey to swim or be swept by with the current. Using bathymetric maps, look for areas with a variety of contour changes such as basins, channel edges and humps, as well as access to a variety of depths, as will provide the greatest odds at finding fluke. Fluke will often hold at a specific depth, dependent on the conditions, so by targeting an area with a variety of depths, you can zone in to where the majority of the fish may be holding.

I generally target waters between 20 and 70 feet in depth. Fluke can be caught in depths outside this range, but for keeper-size fluke in mid-summer, this is a good bet. As fluke often lie on the downstream side of drop offs, the zones where the currents flow perpendicular to such structure will often yield fish.

Of course, you’ll also need to scout out nearby launches for your kayak. While many nearshore fluke spots have traditional boat ramps nearby, a set of wheels will open up more potential launch locations, and allow you to transport your kayak over sandy or rocky shorelines to provide easier access to your fishing grounds.

Electronics are a key part of the kayak fluke equation, not for seeing the fish—bottom-hugging fluke don’t show on fishfinders—but for identifying the structure.

The chartplotter will help you locate depth change, and see your tracks over an area, which will help you systematically cover an area in order to find the fish. ur previous tracks so you can stay on the fish. Knowing t drift speed is also helpful as it is best to maintain drifts between one half and one knot. Tracks overlaid on mapping can be used to systematically work a section of structure so that each time you reset a drift, you can adjust the drift slightly to cover new ground.

Sonar and down scan imaging are most useful for identifying schools of bait and their position in the water column. Marking fluke using sonar and down scan is possible, but only when the fish are coming off the bottom and feeding.

Knowing the drift speed is also important. Drifts between 1 and 1.5 knots are ideal for fluke, and by seeing your drift speed on the electronics, you can adjust your approach to get into that zone.

When the current and wind conditions are right, fishermen in any craft can enjoy perfect drifts for fluke. It becomes difficult when the current or wind do not cooperate. This is when kayaks actually provide an advantage over boats.

When the tide or wind direction changes, and you stop catching fish, this doesn’t always mean the fluke bite has shut off. When the current slacks, or the wind opposes the current, most often the lack of bites is the result of a bad drift. This is when I use the pedal-drive of my kayak to “create my own drift.”

If the wind is opposing the current, I will pedal to match the speed and direction of the current to provide the most natural presentation—since fluke often set up at ambush points looking for forage being brought by the tide. If wind is blowing in the same direction as the current, causing me to drift too fast, I will turn into the wind and tide. By facing up current, pedaling just enough to mitigate the effects of the wind, a drift matching the speed of the current can be achieved. Alternatively, when the current slacks and there is no drift to be had, pedaling slowly and increasing the weight of the jig can create a drift, presenting the bait to fluke that may be stationary or moving between the tides. These techniques have helped me continue catching fluke during tough drift conditions while nearby boat fishermen struggled to get bites.

Fluke most often use currents and structure for ambushing their prey, but in the presence of abundant bait, they will actively hunt them. Finding bait schools such as sand eels, peanut bunker, or squid can be key to finding doormats.

Fluke will travel and feed over relatively featureless bottom, as they pursue large schools of baitfish While pedaling to and from your fluke spots, watch your fishfinder for schools of bait. Anywhere you see a school of baitfish near the bottom (and even sometimes even midway in the water column) is a good place to drop down and jig.

Whether fluke fishing from boat, kayak, or shore, a sensitive rod capable of detecting the bottom as well as light bites is crucial. I prefer a longer rod of 7 ½ to 8 feet in length, so I can reach around the bow of the kayak with a fish on the line.

Low-profile baitcasting reels are excellent when fluke fishing as they allow the angler to easily release and retrieve line to maintain regular contact with the bottom. Fishermen can even drop back line with just one hand on the reel, leaving the other hand free to work the rudder to maintain the desired drift direction.

Having an easily accessible net is important for landing fluke, as they are notorious for throwing the hook while thrashing at the surface, and can be difficult to land by hand.

To keep your fluke fresh during your trip, kayak anglers have two options. One is a soft cooler or fish bag mounted to the bow or stern of the kayak—there are several styles designed specifically for kayak fishing. Filled with ice at the beginning of the trip, these insulated bags will keep fish cold until it’s time to fillet them.

The other option is using a stringer to hang fish off the side, keeping them in the water while fishing. This is my preferred method. Though a full stringer can create significant drag, it is more easily stored and takes less preparation than a cooler full of ice.

It’s very satisfying to secure a few fresh fluke dinners without having to burn fuel. Plus, fishing from a kayak will force you to look more closely at your local waters and help you identify fluke hotspots that boat fishermen blast right past on their way to distant fishing grounds, leaving you the nearshore fluke all to yourself.