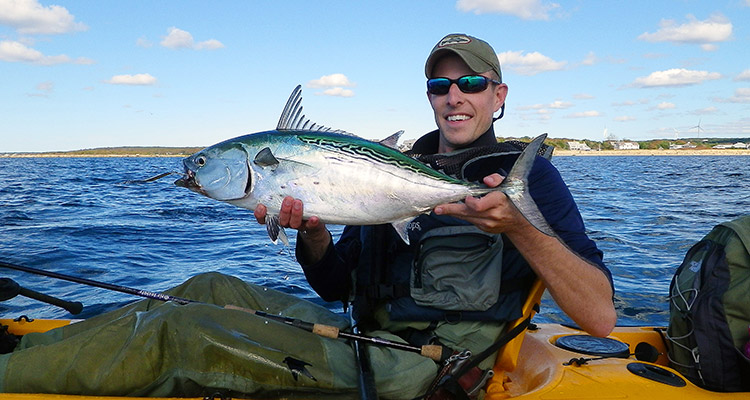 Each year for a brief period in the late summer and early fall, false albacore move inshore and within easy reach of kayak anglers.

If you’ve ever fished for false albacore from a boat, you might think that pursuing them in a kayak would put you at a major disadvantage. After all, false albacore are capable of swimming at speeds of up to 40 miles per hour and are known for their short-lived feeding frenzies. However, albies are averse to engine noise and often disperse after being buzzed by motor boats. A kayak allows an angler to fish albie blitzes with stealth, meaning more casts at pods of feeding albies before they sound.

Kayakers also have far better range than surf-fishermen. A kayak angler can paddle to feeding schools well beyond surfcasting range and chase those schools as they move.

Since albies are usually found in places with strong current, waves, and wind, kayak choice is very important. Albies often feed at the mouths of inlets or in the open sea. For this reason, a stable kayak designed for ocean use is essential. A sit-on-top kayak is the safest option since it cannot get swamped with water should the weather worsen and the seas build.

A pedal-powered kayak is a big advantage. False albacore blitzes are both shorter in duration and smaller in size than bluefish or striper feeding frenzies, and an angler will often only get a handful of casts or less at a particular pod of albies. As a result, every second counts, and the time it takes to put down a paddle and grab a fishing rod could cost you a shot at hooking up.

Pound for pound, false albacore are the fastest, most powerful fighters in the Northeast inshore waters. In addition, these fish have great endurance and will take multiple runs away from your kayak before being landed. However, the primary forage base for false albacore is usually smaller bait such as bay anchovies or sand eels. As such, your rod must be light enough to cast lures less than ¼ ounce but strong enough to withstand the fast and powerful runs of a small tuna. It is not an exaggeration to say that hooking into an albie feels like snagging a speedboat.

For kayak albie fishing, rod choices must strike the balance between sensitivity and power. To this end, I like using a 7-foot medium-power, fast-action St. Croix Triumph along with a reel in the 4000 class when fishing plastics. For casting metal, I beef up my tackle to a medium-power surf rod with a 5000-class reel. In both situations, I use 15-pound-test braided line, which allows me to cast light plastics long distances. It also allows me to cover a huge amount of water when blind-casting metal lures in a searching pattern if the albies aren’t visibly feeding on the surface.

Albies have the best eyesight of any of our local fish, so leader choice is important. The best choice is a 10- to 12-foot fluorocarbon leader tied directly to the braid without swivels. For strength, 15-pound-test fluorocarbon is a good choice. In clearer and calmer waters, you may want to consider using a 12-pound-test leader if the albies are finicky. In any event, make sure to have a properly set drag because the initial run will snap 15-pound-test braid in an instant if the drag is too tight.

When targeting albies, you almost always must match the hatch in terms of baitfish. Since albies often feed on tiny forage such, the use of flies can be advantageous. For fly-fishing, an angler can safely use a 9-weight fly rod with matching reel. Although an 8-weight rod is also an option, you run the risk of breaking your fly rod during the fight even with the superior leverage provided by a kayak.

However, the use of conventional fly-fishing equipment in targeting albies from a kayak is often not the best way to present a fly. Albie fishing can be a game of inches since these fish move around in small, tight pods. Fly rods have less range and accuracy than spinning equipment, so the limited casting range of a fly rod from a kayak can be a major impediment. In addition, casting a fly rod takes a few seconds longer than a spinning outfit. In that slightly longer time, the albies may have already moved off and you may not have a shot at them.

For the reasons above, it is better to present flies from a kayak using spinning equipment. For casting flies from spinning gear, a kayak angler has two options. The first option is to fish the fly as a dropper in conjunction with a metal lure. To do this, remove the hook from the metal lure, attach an 18” leader to the split ring, and tie a fly to the terminal end. Using this rig along with light braided line will allow you to cover much more water with your fly than casting with a fly rod.

The second option is to use the splasher-feather outfit popularized on the West Coast. For this outfit, slide on a splasher (also known as a casting bubble) to your line, attach a swivel to the splasher, and tie an 8-foot fluorocarbon leader to the swivel. At the end of this leader, attach your fly of choice. The casting bubble not only adds the weight necessary to cast your fly a long distance, the splash provided by a casting bubble also provides an attractor that albies find irresistible. In terms of fly selection, you should appropriately match the hatch, but sand eel and bay anchovy patterns are almost always very effective.

Soft plastics are one of the most consistent producers of false albacore in calmer conditions, and they are perfect for kayak use. First, the single hooks make unhooking an albie from a kayak a much easier proposition than a treble hook. Second, plastics can be quickly and softly casted to albies in calmer conditions with minimal water disturbance. Finally, plastics are likely the most realistic presentation for these sharp-eyed and finicky fish. Some popular choices are 4-inch Tsunamis and Slug Gos. In clear water, try to match the color to the forage—transparent amber is a close match to bay anchovies; in stained water, pink or white will produce.

Metals work well with albies on darker days with a little chop. While albies will be selective on calmer days, making flies and plastics the best producers, they let their inhibitions down during windy days, and will more readily take tins. The best attribute of fishing tins is the ability to minimize the effect of wind to cover much more water. With metal lures, you again want to match the hatch. If the albies are on bay anchovies, Deadly Dicks are excellent producers since they are very thin. If the albies are on peanut bunker, the wider Krocodile spoons work well. The Standard Issue Tackle Epoxy Jig is an effective searching lure, as I’ve caught albies on it while blind casting.

Catching these small tuna from a kayak is an unforgettable experience. Take advantage of the short window that albies are around by targeting them from kayak.