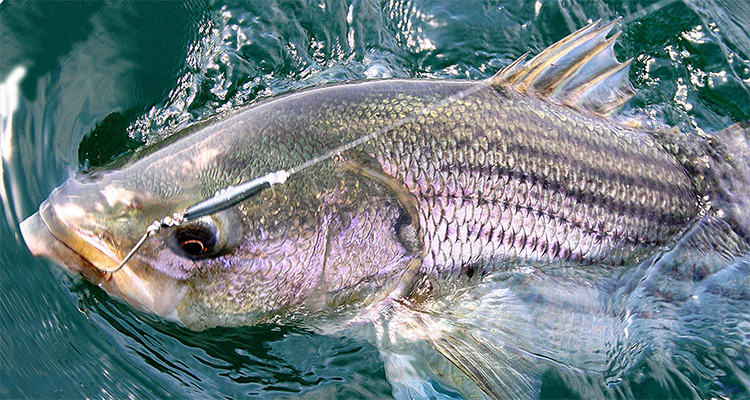 According to gemologists, June birthstones are pearl, moonstone, and Alexandrite. Other than pearls for the gals, I think the June babies were cheated. What the heck is Alexandrite? What happened to gemstones that people actually know and value? Also, isn’t one birthstone per month enough? Luckily, if you’re a fisherman you don’t have this problem because your June gemstone is the diamond—the diamond jig, that is.

It’s the bait that makes diamond jigging a hot technique in June. Unimaginable numbers of sand eels trigger fast bites from migrating gamefish in many places this time of year. Throw in some squid, sardines and languishing herring, and the jigging can be ridiculously good. There are many places where an angler can successfully diamond jig in June, including Nantucket, Sandy Hook and Martha’s Vineyard to name a few, but for a Long Islander like me, Montauk is my first and best choice.

Last June I experienced how good Montauk jigging can be while fishing with Captain Tom Mikoleski aboard The Grand Slam. We had actually set out to fish for fluke on the south side of Montauk, but the fluking was mediocre. Even at famous spots such as Montauk, anglers can experience a bad day for one species. Fortunately, Mikoleski had a back-up plan.

It’s important to be observant while on the water in order to pick up on signs of activity. It’s also important to be an opportunistic angler. As a result, on the turn of the tide we focused our attention to the east where small groups of terns began to wheel and dive off the point. To our captain, this was a sign that stripers were gathering in the rips to gorge on bait. 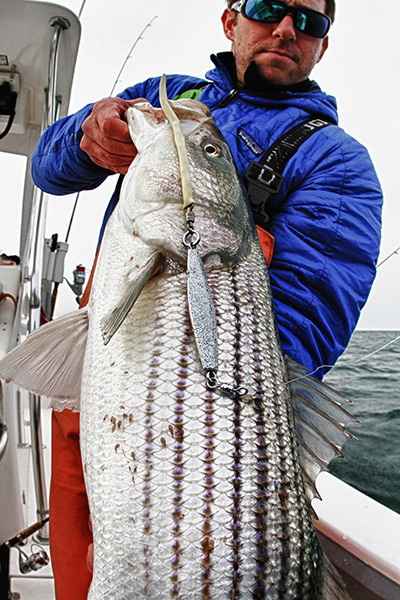 “If the fluking was better,” Mikoleski offered, “we’d wait a bit for the tide to build, but since the fluking is so slow, let’s get over there and see what’s happening. It might take a while for the action to get going, but let’s go under the birds and get a feel for the drift.” Tom knows this water as well as the rhythm of the fish that feed around Montauk, and once again he was right. At first, Ross Squire, Captain Tom and I pulled in a few schoolies on each drift, but the action could best be described as picky. Yet, as the tide strengthened and the rip built up, more birds gathered overhead to pick off the baitfish the stripers missed. The sonar screen gradually filled with life that occasionally bubbled to the surface. Although we fished under the birds at first, at the peak of the tide Tom paid no attention to them, preferring to work sections of the rip that traditionally produced the best action.

The 3- to 5-pound stripers became 10- to 15-pound bass, and the number of hits and hook-ups per drift became impressive. At numerous times, all three rods were bent to fish that were charged up by competition and fought like demons. It was about halfway through the bite when we began to see stripers—huge ones—breaking the surface around the boat and flushing sand eels and greenback sardines. At that point we were hoisting stripers in the 20- to 25-pound range. It was full-blown mayhem!

I just love the thump when a fish hits a diamond jig and how the rod doubles over when the hook is set. At Montauk, I used an Ava 47 jig because with the light wind, the drift was not very fast. However, I was prepared to switch to heavier jigs if the drift speed increased.

Good jigging technique is impossible without the right tackle. In my opinion, conventional reels and medium-heavy 6- to 6½-foot conventional rods are the best combos for diamond jigging. Spinning reels simply do not provide the ease of drop and lift or the feel for the lure an angler needs to maximize hits. Plus, spinning rods tend to be too limber to make solid hooksets or to fight fish comfortably when diamond jigging. You can test the suitability of any rod with a simple technique. Attach a 4-ounce diamond jig to the rod tip with several feet of monofilament line, and observe the rod tip as you jiggle it up and down a few inches. The tip should have a small bend as you lift the jig but should not bob up and down when you simulate a lift and drop.

I used to drop heavy diamond jigs to the bottom and reel them to the surface; that is, until I fished with more experienced diamond jiggers who taught me a technique that’s easier on the arms and more productive. My mentors taught me to drop to the bottom and as soon as the jig touched, lift quickly with a snap, and then let it immediately flutter back toward bottom, repeating this over and over. It works better than a continuous retrieve because most of the fish are feeding within a foot or two of the bottom, so why not keep the jig in the strike zone as long as possible?

There are a few keys to this snap-and-fall approach. First, don’t let the jig drop with lots of slack in the line. Instead, snap the jig up and follow it with the rod tip until it hits bottom. Do this without slack, but also without tension. Watch the line and set the hook if the line “jumps.” Obviously, it’s also important to keep the jig as straight up-and-down as possible. When the scope in the line increases to about 45 degrees, reel in and start over. You should get about a dozen upward snaps and downward flutters before you need to reel all the way in. If you’re only able to snap and flutter a few times before the scope becomes too great, increase the weight of the diamond jig.

Most of the hits come as the jig flutters toward the bottom, and that includes the initial fall from the surface. It’s important to feather the line lightly with your thumb as the jig descends and watch the line at all times. If it jumps, press down on the spool, engage the clutch, and set the hook sharply.

Diamond jigging can be frustrating for anglers who struggle with the feel of the gear and the jigging technique. Similar to any angling approach, the process quickly becomes second nature if an angler sticks with it, and the rewards in terms of hookups and fish caught relegates the early difficulties to a faint memory.

The action that June day was very intense, and our arms, elbows, and wrists became fatigued. Now, since I’m a hardhead and love diamond jigging more than most folks, I stuck with the jigging, but Mikoleski offered a twist. He disappeared into the cabin and quickly returned with two rod-and-reel combos each fitted with a three-way rig that featured a bucktail at the end of a 3-foot leader.

“Let the sinker fall all the way to the bottom. Reel up a foot or two, and just hold on. The bucktail and pork rind will glide through pods of fish and do its magic. Hold on, because the strike will be hard.” It wasn’t long before both rods bent over hard. Ross discovered that he enjoyed this technique more than jigging and was enthusiastic about how the bass walloped the bucktail.

I’ve been blessed by many excellent diamond jigging outings over the years for stripers, weakfish, blues, and even cod, but when I consider the intensity of the action, the average size of the fish, and the visual excitement of watching big stripers exploding at the surface next to the boat, I must say my outing aboard The Grand Slam was one of the very best trips. Satisfied and happy, we left the fish biting because we were spent and the tide was dying, but not without turning our heads longingly back towards the rips a few times as The Grand Slam powered back toward Lake Montauk.