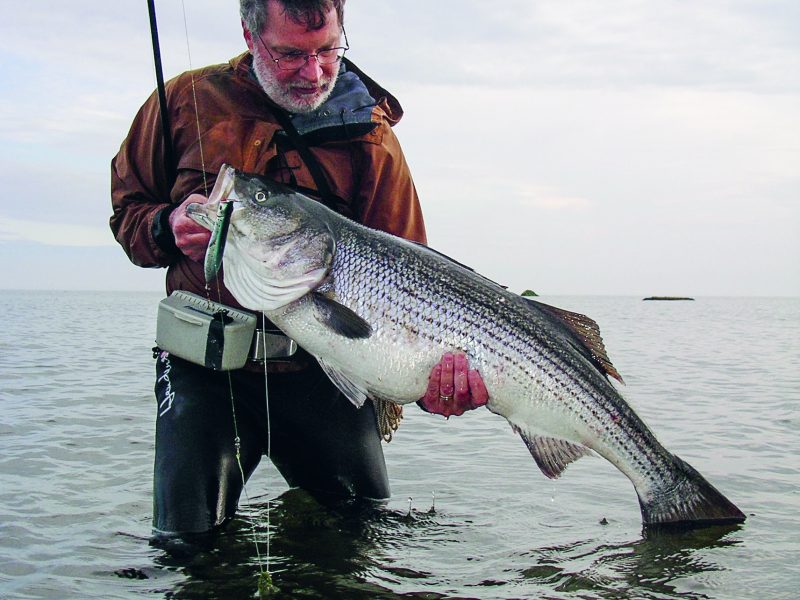 Before doing any ground-level research on a rocky shoreline, Long Island surfcaster and author John Skinner studies satellite imagery. Skinner says the most important things he looks for aren’t visible from the beach. These include depressions— areas that are slightly deeper than the surrounding water where the fish settle in—and other structures that striped bass might patrol while feeding along rocky shorelines.

He’s also searching for parts of the shoreline that “catch” the current. While it may be difficult to get the full picture of how the tide and current set up on a given spot, this scouting supplies a good idea of what to expect.

Start With a Pencil Popper

On the ground, after establishing the likely locations, Skinner uses a pencil popper during theday to gather hard evidence about whether or not stripers are present. The pencil is a useful searching tool because it casts far and covers water well, is a reliable striper catcher, and as Skinner says, he doesn’t even have to catch a fish to establish that they are there. A swirl or splash behind a pencil is enough to determine that bass are in the area.

After confirming the presence of stripers, Skinner says he may stick with the pencil popper or switch to another lure like a spook or bucktail jig.

While it’s tempting to head right for the farthest point of land, scouting via satellite imagery can reveal productive structure inside the point that many fishermen may overlook on their rush to get out to the point.

Start with a long-casting pencil popper to cover water and determine if fish are in the area. If fish are swirling but not striking, switch to another lure such as a bucktail jig or topwater spook, provided the fish are within casting range of these lures.

Eelgrass beds near rocky shores are important habitat for some of the striper’s favorite forage, and bass regularly patrol these areas while searching for a meal. Often they’re a dark patch and easy to spot with satellite imagery.

Rocky points are bass magnets and often extend out into deeper water, where stripers will stage on the down-current side of the structure. Exposed boulders like the ones on the diagram will break the current and provide ambush points for feeding stripers.

Stripers often settle into depressions and drop-offs in deeper water and these areas are prime surfcasting locations. Bucktails, soft plastics on jigs, rigged eels, needlefish, and deep-diving metal lips are some of the best options for locating stripers in these holes.

However, don’t overlook the water close to shore, especially at high tide. Work your lure or eel parallel to the shoreline to target stripers feeding tight to the rocks. Large stripers often search for food on rocky points in water as shallow as 3-feet during slower stages of the tide.