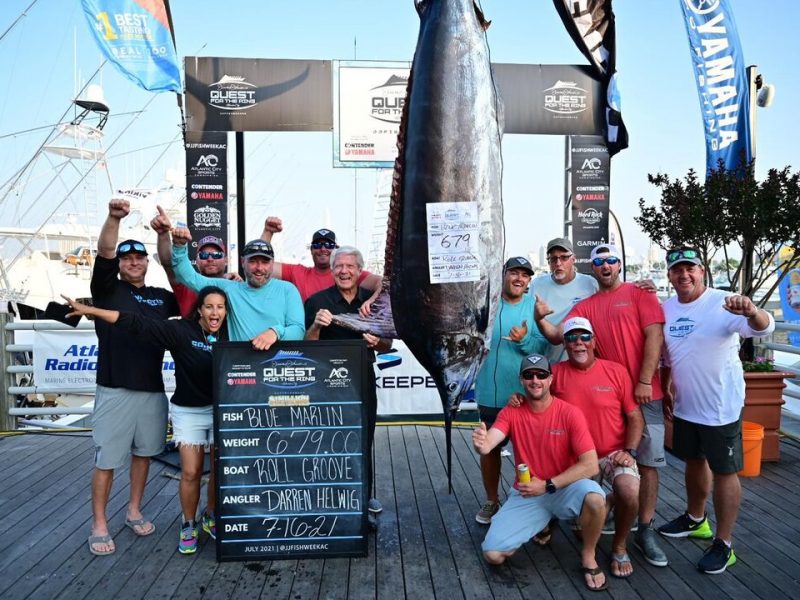 Jimmy Johnson’s Atlantic City “Quest for the Ring” Championship Fishing Week wrapped up in Atlantic City, New Jersey on Saturday, with offshore anglers vying for over $1 million in prize money.

Roll Groove Sportfishing out of Ocean City, MD brought a 679-pound blue marlin to the dock, giving them first place and a prize of $295,000.

David Johnson (below) and his crew aboard the 62-foot Viking “Business” won the heaviest white marlin division and a prize of $205,000 with a 73.3-pound fish.

Basketball G.O.A.T. Michael Jordan and his crew aboard the 71-foot Viking “Catch 23” won the Catch and Release Tournament Division (Powered by Yamaha) and $94,600 with 12 white marlin releases and 1 blue marlin.

The tuna category was won by “Texas Tea” out of Manasquan Inlet, NJ with a massive 227-pound bigeye tuna.

Jimmy Johnson’s Atlantic City ‘Quest for the Ring’ Championship Fishing Week (JJFISHWEEKAC) celebrates the magic of Atlantic City as a destination tournament and features extreme competition and celebratory parties each night of the week for the teams and their guests and families. JJFISHWEEKAC is brought to you in partnership with Meet AC and the Atlantic City Sports Commission, hosted by Contender Boats, powered by Yamaha Outboards, and fueled by Papa’s Pilar Rum.