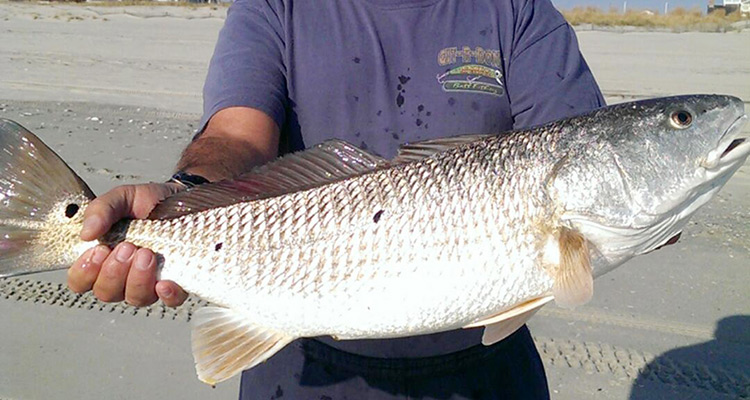 The fall and rise of the New Jersey channel bass.

On the first clear, chilly autumn morning in 1921, George Senior would start looking northwest from the Stone Harbor life-saving station into Jenkins Sound. He was looking for the arrival of the first brant of the season. Experience had taught him that this small goose arrived around the same time as the red drum, in the same way that gnats and black drum arrived at the same time in the spring.

Hereford Inlet between Stone Harbor and Wildwood and Corsons Inlet between Ocean City and Strathmere were a Mecca for fishermen seeking red drum in the early 20th Century. Fish camps, clubs and beach houses were built as a direct result of the New Jersey red drum run. This tradition continued until the population totally collapsed. The fish management practice of the day, or lack thereof, was to fish a population until it was no longer profitable, then move on to the next fish. Hoping by the time they returned to the fished out stock, the population would rebound and the cycle could continue. However, as fishing technology and techniques advanced, some fish stocks were pushed over the edge, among them the red drum.

Red drum vanished from the New Jersey beaches for the better part of a century, until recent years. These copper-colored beauties have been making more regular appearances in the New Jersey surf during the fall.

They are not yet turning the inlets a dark indigo like they did on that October morning a century ago, but there are enough red drum found along our beaches for fishermen to target them with a reasonable expectation of success. Most of the red drum caught in 2013 fell within the 18- to 27-inch slot limit. The biggest I heard of was hooked by Wayne McDermott on the Stone Harbor Point beach in early September. He estimated the fish at 40 to 50 pounds. He and a crowd of spectators got a good look at the bull red before it swam out of the trough and into open water, taking all of Wayne’s line with him.

One hot October afternoon last year, CJ Polhamus walked past the sunbathers and swimmers to do some fishing. It was so nice out, he left his waders in the truck, and fished in his shorts. The conditions were poor for striped bass, but perfect for speckled trout, so he grabbed his light rod and reel. The waves were small, creating a soothing steady cadence as he walked into the surf. His first cast landed right on target, and his lure swam along with the bait being washed out of the beach gully. Halfway through the sweet spot, a fish hit and went on a long drag-screaming run. CJ chased the fish up and down the beach, and eventually spotted the red drum in the white water. He backed the fish out of the surf then stood over it in awe. He reached into his pocket for his cell phone and shared his excitement with his fishing crew.

CJ caught the fever that afternoon, and for the rest of the fall, he and his fishing buddies went on a hunt for Jersey red drum. They started by returning to the same spot during the same tide phase the next day. Sure enough, CJ’s friend Mark caught a beautiful red drum. By targeting these elusive fish the crew was able to catch an impressive amount of red drum in many different locations from Cape May County to Island Beach State Park. In fact, they caught more red drum than keeper striped bass last season. Here is some of the information they gleaned from their quest that will help you catch Jersey reds this fall.

How often and how long the prime conditions line up plays a huge part in the red drum bite. When conditions are in place, fish hard and fish often. The longer the conditions hold, the better the fishing gets. When the conditions are not favorable, your time is better spent scouting for new fishing spots. The larger your inventory of fishing locations, the better.

Northwest, north-northwest or west winds are best. Consecutive days with these winds really heats the bite up at most locations, including the beachfront. Other directions are good as long as they are light.

The New Jersey red drum were caught in clear water from 72 to 49 degrees, with 56 degrees being the sweet spot.

Red drum feed best on strong tides. When possible, fish around the strongest tide of the day. This tide will move more baitfish, which helps turn on the bite. Three days before to three days after a full or new moon provides the strongest tides. These days should not be missed even if the conditions are not perfect.

The best red drum beaches are often the same beaches that are best for striped bass fishing. The beaches that have escaped beach replenishment projects have the best structure and will hold the most red drum. These structures include sandbars, troughs, tidal pools, jetties and groins. Beaches that have been replenished will return to their natural state in a year or two, so don’t completely overlook them.

During low tide scout as much beach as you can cover. Look for tidal pools and how they drain, sharp drop offs along the surf line and eddies around the jetties. Make a note and mark these areas so you can find them when you return to fish during a higher part of the tide.

Sand bars, sand flats and islands form in some of the Cape May County’s inlets. Channels and holes are carved by the fast running tides. Sharp drop offs and white-water rips confuse baitfish and make them vulnerable to predators. These areas produced many red drum last season.

Having an intimate knowledge of the inlets you fish is imperative. Inlet fishing can be spectacular, making it easy to over look common sense. You may see fishermen get out of their boats and fish the sand bars with waders. This is not safe – the sand bars inside inlets constantly shift and can be undermined and collapse.

A number of New Jersey red drum are caught on backwater flats, and many more are spotted. Flat calm conditions are best. A trolling motor, a push pole and a good pair of binoculars will help you find feeding reds on the flats. Kayak fishermen also do well in the back. In fact, the first Cape May County red drum of 2014 was taken by a kayak fisherman in the back bays.

Red drum are much more fussy about lure presentation than stripers. You could be fishing over a big school of red drum and never know it if presenting your lure improperly.

A good presentation starts by casting upcurrent of the strike zone. Work the lure back at the same speed as the water. your lure should flow at the same speed as the water. Where you position yourself is important when trying to cast up tide of the strike zone, for example: in some spots on the beach you may have to wade out to a sand bar and cast back towards the beach.

Red drum are real touchy, one minute they like a slow and steady retrieve with the lure never hitting the bottom , the next they like a lift and drop. Switch back and forth between the two styles.

One of the top lures for Jersey reds has been the Culprit Minnow in the 4- and 5-inch sizes. The 4-inch Lunker City Salt Shaker and the Bass Assassin are also good. Rig these plastics on a round jighead of 1/8-, 1/4-, 3/8-, or 1/2-ounce, depending on the depth and current speed.

For a leader, tie a length of 20-pound-test fluorocarbon directly to the main line with a uni-to-uni knot. A swivel can affect the way the lure carries in the tide and may spook the fish.

Red drum can be hard to find and finicky once you locate them. If you enjoy the hunt and adjust your expectations and stick with it, you too will hook up with a hard-fighting New Jersey red drum.