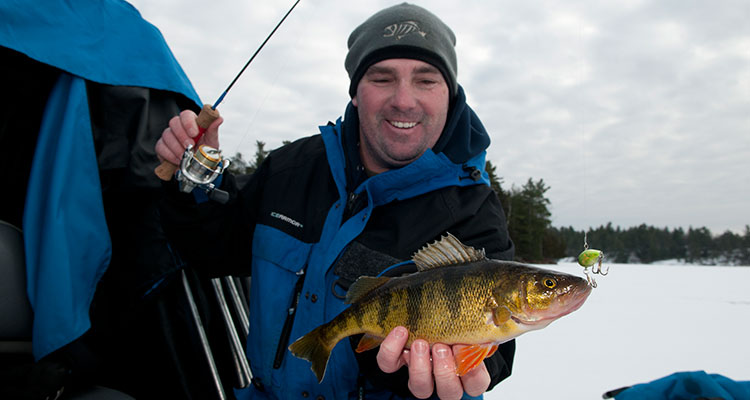 Within the last few years, several new horizontal jigging baits have hit the market. Jigging minnows, darters, blades, and horizontal jigs continue to gain momentum as more anglers adopt fast searching tactics for panfish, like they do when hunting larger predators such as walleye and pike. The natural horizontal profile of these lures is one reason they’re effective. Another is the latest offerings tout exceptional realism thanks to sophisticated finishes. Cutting-edge manufacturing processes also give baits an incredible action to attract fish and tempt them to eat.

Let’s take a closer look at the lure options available, their features, and how they catch panfish through the ice. For the most part, the methods apply to yellow perch and crappie, but bragging-sized sunfish will also attack these lures with vigor.

Jig Me A Minnow

Jigging minnows are the veterans of the group. The winged tail on a jigging minnow gives it a unique gliding action that’s unmatched by other presentations. Popular models include the Rapala Jigging Rap and Jigging Shad Rap, Northland Fishing Tackle Puppet Minnow, and Nils Master Lahti. I stick with 1.25- to 2-inch versions when targeting panfish.

When yellow perch, crappie, and sunfish are super-charged and active, they’ll hit a bare jigging minnow; however, the majority of the time, tipping the center treble with bait is recommended. A fresh minnow head or a Berkley Gulp Minnow Head are two reliable options. When using jigging minnows for panfish, I also modify the center treble to increase its distance from the bait’s body. This enhances the bait-tipped treble’s action. It also isolates the target better for panfish, which improves their strike accuracy, and that means improved hook-ups.

I most often use a Stringease Fastach clip to attach the hook to the lure. The bonus with this setup is that a simple twist of the wrist is all it takes to put on or remove the hook, which helps when tipping with bait. Threading a minnow head on the treble’s shank and then attaching the clip to the hook eye makes it difficult for pecking panfish to steal meat without touching hook points. Two other modification options are swapping out the factory hook with a long-shank treble or linking a few split rings together.

Stringease Fastach clip[/caption]A lift-fall-pause jigging sequence is all it takes to catch panfish on a jigging minnow, but the devil is in the details. Long 12- to 18-inch raises work well to attract fish from a distance. Unless panfish attack on a pause right after they arrive, I usually tone things down slightly once one moves into range. At this point, jigging consists of quick snaps between 3 to 12 inches or slow raises. Monitoring electronics and watching a fish’s reaction to the lure’s movements offer clues on the best approach. Letting the lure fall on slack line encourages it to naturally swim downward in an arc. When fish are biting light, following the bait down with the rod tip and keeping line semi-slack helps detect a light hit occurring on the drop.

Rushing is a common error with jigging minnows. It’s critical to allow the bait time to come to rest. As a jigging minnow sinks, it glides outward. Once it pulls the line taut, it swings from the side back to center. You can monitor this by watching the line shift its position in the ice hole. As the minnow slides to center, it shimmies and rocks as it comes to rest, and these subtle movements are what frequently trigger a panfish to bite. With fussy fish, light shakes or slow raises of the rod followed by pauses will often seal the deal.

A major advantage of jigging minnows is that they sink to the bottom quickly when dropped down the hole. When there’s a hot deepwater bite and you need to keep a school interested, these baits deliver the goods. Slow down the fall as the lure approaches the strike zone to prevent spooking fish. Reducing fall speed also causes the lure to begin a wide downward spiral, parachuting it to a more alluring speed. This trick worked well for me last January for jumbo perch.

The fish were holding at the base of a drop-off. Above it was a large, fertile bay, while the lower portion gave way to a slow-tapering 20- to 26-foot flat. The perch were patrolling the drop-off’s lower pivot point, swimming from one end of the bay and then back. I had several holes drilled along the drop-off to follow the school. The fast-sinking traits of a jigging minnow and its provocative swimming action helped call in curious perch. Banging the bait on the bottom to create a silt cloud was another key to attracting perch. Light jiggles and slow raises were the main triggers, and every perch was hooked on the “shish kabob” minnow-head treble.

Lipless crankbaits have long been popular ice baits for walleye and northern pike, but the selection of panfish-sized lures was slim. All of this has changed with 1- to 2-inch baits arriving on the scene, like the Salmo Chubby Darter, Lindy Darter, and Northland Fishing Tackle Live-Forage Ripping Shad. These darters are game changers. They provide a wobbling, swimming action that’s unavailable from other lures on the market. While jigging minnows remind me of jerkbaits, darters are like crankbaits. Both styles catch fish in open water—to be prepared, I always carry both. Unlike jigging minnows, I don’t add meat to a darter because it can sabotage the action.

Certain darters contain rattles, which is another reason they’re so deadly on ice. Their ruckus calls in fish from a distance, meaning you “cover” more water per hole compared to a quieter, less rambunctious bait. A darter is an excellent option for tracking down roaming panfish on flats.

Darters are equally good at catching suspending crappie. A small darter around 1.5 inches weighing 1/8-ounce will sink steadily but slowly enough to be seen by fish in the immediate area. Crappie farther away will come in for a look after detecting the bait’s rattle and vibrations. On many occasions, I’ve seen a blank sonar screen suddenly light up with flashing lights after snap-jigging a rattling darter for suspending crappie.

How a darter behaves under the water has a lot to do with the model as well as the intensity of jigging. When aggressively ripped, the Lindy Darter, for example, will kick up and off to the side then turn and swing back on the fall. Other lures will shoot upward with a tight wobbling action, keeping a more vertical trajectory. The majority of darters shimmy seductively while sinking, imitating an injured baitfish.

When they’re supercharged, panfish will attack a darter with gusto. More often, however, fish will attack a lure as it slowly falls or hovers in place. Slight jiggles and side-to-side hand moves are good triggers as they keep the lure at a constant depth while still sounding the rattle.

Get the Metal Out

Metal bladebaits are another lure style in the horizontal hardbait category. The Northland Fish-Fry Minnow-Trap, Bass Pro Shops XPS Lazer Blade, and Reef Runner Cicada are examples. These lures excel at triggering reaction strikes with their tight-wiggling action and loud vibrations. While darters have rattle chambers, a blade produces a different pitch thanks to its thin metal body. Some days fish prefer one style over the other. The flat sides of these lures also put out plenty of flash that can pique panfish interest. Typically, I jig blades using hard lifts and short snaps in a similar manner to darters.

Northland’s Fish-Fry Minnow-Trap has given this category of lures a facelift. These baits feature a printed image of a young-of-the-year baitfish minnow on a molded zinc body that’s customized for each forage type. The yellow perch profile is different than a dace chub or a fathead, for example. The realism of these baits works well to fool jumbo perch and crappie.

Another niche within the horizontal lure category is vertical jigging minnows, sometimes called banana jigs, which includes baits like the Blue Fox Lil’ Foxee Jigging Minnow, Lindy Slick Jig, Magz Manufacturing Badd Boyz, and Release-Me Baits Humpback Creeper. These thin, hunchbacked creations are elongated jigs that have a horizontal profile thanks to their mid-back line tie. These baits are particularly potent at coaxing bottom-hugging, neutral mood and inactive panfish to eat as their nose-heavy design causes them to rapidly plummet into the strike zone. Be sure to slow the descent 10 feet or so off bottom so as to not startle fish.

These jigs can be manipulated to perform different actions. Quick snaps of the rod cause the jig to hop to the side and then swing back. Using a loop knot or a small clip orients the jig nose down. Subtle nods and shakes of the rod tip with this rigging will rock the head up and down, imitating a minnow feeding on the bottom. On rocky areas, this action also emits a ticking sound that attracts fish.

While aggressive crappie and perch can inhale small versions of these jigs, tipping with bait is a must when panfish are picky. Otherwise, what commonly occurs is fish pecking at the jig’s head, out of reach of the single rear hook. Adding a minnow head or tail is an option to focus their attention at the bait’s business end.

Plastics also work well. One option is to cut a tube or a forked-tail minnow, like a Lunker City Fin-S Fish, in half, and thread the tail on the jig hook. Two other good tipping baits are the Berkley Micro Power Nymph or the Exude Micro Crayfish. These 1-inch crayfish impostors work well for jumbo perch given their sweet tooth for craws. Worth noting is that the Lil’ Foxee Jigging Minnow features a tail dressed with feather and flash fiber that bolsters triggering qualities and allows the bait to be fished right out of the box.

I fish the above lures using 28- to 32-inch light-powered rods. On most combos, I have reels spooled with 4-pound-test fluorocarbon. This is more than what is needed for panfish, but it helps subdue incidental catches of walleye and bass. When deepwater jigging for light-biting fish, I rely on 8-pound-test braided line for its no-stretch sensitivity and use a 30-inch fluorocarbon leader of 4-pound-test to keep the presentation stealthy.

I also regularly tie in a micro-sized swivel 18 inches above the lure to eliminate line twist caused by the swinging, swimming action of certain baits. This is an important preventive measure. A lure that spins like a figure skater when paused will quickly turn off panfish. Small clips are also handy for connecting hardbaits and making quick lure changes.

No hard-water lure collection today is complete without horizontal ice baits. Be sure to pick some up this season and get ready to see some giant panfish on the end of your line.